Lions reproduce very well in captivity and do not mate at any specific time of year. 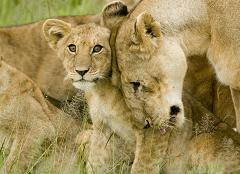 A lioness may mate with more than one male when she is in heat.

Female lions are polyestrous, and in the wild a female will normally breed every two years.

A mating bout could last several days, and during the female’s estrous period, the couple copulates twenty to forty times a day and are likely to forgo eating.

The average gestation period for lions is around 110 days, the female gives birth to a litter of one to four cubs in a secluded den or sheltered area usually away from the rest of the pride.

She will often hunt by herself whilst the cubs are still helpless, staying relatively close to the thicket or den where the cubs are kept.

Lion cubs are born blind, and their eyes do not open until about a week after birth. They weigh about 3 pounds at birth and are almost helpless, only crawling a couple of days after birth and walking at three weeks of age.

Including starvation, lion cubs also face many other dangers, such as predation by jackals, hyenas, eagles and even snakes.

Male lions reach maturity at about 3 years of age, and are capable of challenging adult males in other prides soon after.

Laying It on the Lion.