Tools help, as do various specific techniques, but rock climbers depend mostly on sound judgment, careful analysis, and astonishing nerve.

The physical mechanics of rock climbing involve not only the feet, knees, hands, arms, and body. Pressure of the body against the rock, for example, lends support.

If a very steep rock affords no hand or footholds, the climber may secure a grasp on a vertical rock edge and pull on it horizontally as he, in a sense, walks up, his body leaning at a right angle to the rock. This move is called a layback. Other steep faces may require a courteechelle, in which the lead climber uses his companions to reach a hold: he stands on their shoulders or simply receives a boost. 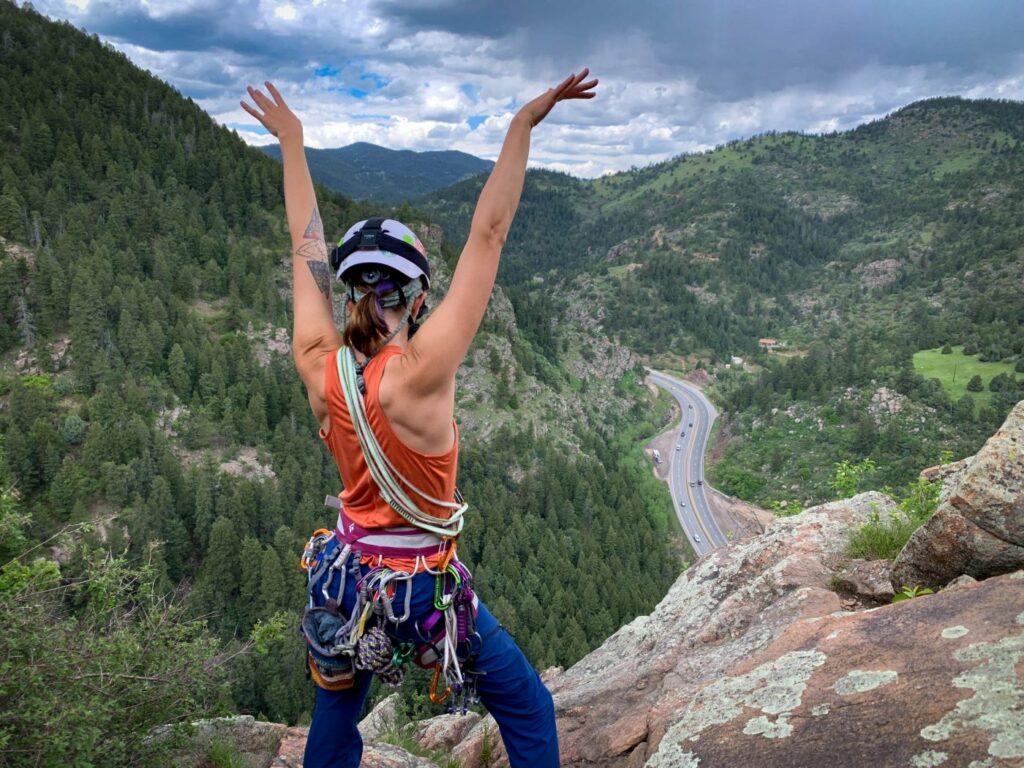 An experienced climber keeps his body as vertical as possible and at a sufficient distance from the rock to be able to move freely. Novices suffering pangs of fear tend to hug the rock, which hinders their progress.

The most astonishing feat of the truly great climbers is known as balance or rhythm climbing. By some uncanny law of nature, a master cragsman can move quickly up a rock, using terrifyingly narrow ledges and tiny fingerholds if he maintains his motion, which creates friction with the rock, and if he is on his way to a counterbalancing position.

A more conventional technique, of course, is climbing in groups, wherein two or more climbers are linked by a rope. The strongest climber is first on the way up and last during the descent.

Nylon rope, 1/2 inch in diameter, has replaced the older manila or hemp ropes, which lacked elasticity. That elasticity proved to be a saving grace for twenty four year old David Harrah of the 1950 Harvard Andean Expedition that climbed Yerupaja in western Peru.

After weeks of climbing over snow and ice, Harrah and a companion reached the 21,770 foot summit. When they started down, the snow gave way, and Harrah fell the entire 120 foot length of the rope that bound him to his partner.

The time it took for Harrah to fall allowed the other climber a split second in which to lie down and slam his ax into a ridge for support. Harrah bounced at the end of the nylon rope, which fortunately had enough give that it didn’t break his ribs. Four thousand feet above a glacier, Harrah dangled in space. It took 45 minutes for him to get back up the rope to his friend, and just how he had the strength to do that, no one knows.

Under moderate conditions, rock climbers move all at once. If the way is precarious, an anchor man secures a stance, wrapping a rope around himself or a rock while the others proceed; this is called a belay.

The top man may gain additional protection by hammering pitons (spikes, wedges, or pegs) into rock cracks, and by running ropes through carabiners (rings) snapped to the pitons. Prussiking is an elaborate process for extremely difficult climbs: pitons are hammered in at every step, more ropes added between climbers, and a sling and pulley system using prussik knots arranged whereby a climber may hoist himself up.

During a descent extra ropes may be wrapped around a rock point to allow for a rappel: two lengths of rope are wound under the climber’s thigh and over the opposite shoulder, the rest of their length hanging down the mountain.

Facing the mountain, the climber walks backward, the ropes slipping slowly through his sure and careful hands.