How Do Snowmaking Machines Work?

Just pumping a spray of water into the air wouldn’t work very well, except perhaps in extremely cold weather. And by the way, the machines don’t produce actual snowflakes; they make tiny beads of ice, each one around ten thousandths of an inch in diameter.

The simple spraying of water wouldn’t work because when water freezes, it gives off quite a bit of heat. That happens because when water molecules transform themselves from a liquid to a solid, they have to stop moving around and settle down into rigid positions, and the movement energy that they previously had must wind up someplace.

If large amounts of sprayed water were to be frozen fairly near the ground, the liberated heat would warm up the air substantially and defeat much of the whole purpose; the ersatz snow would be wet and not very cold. 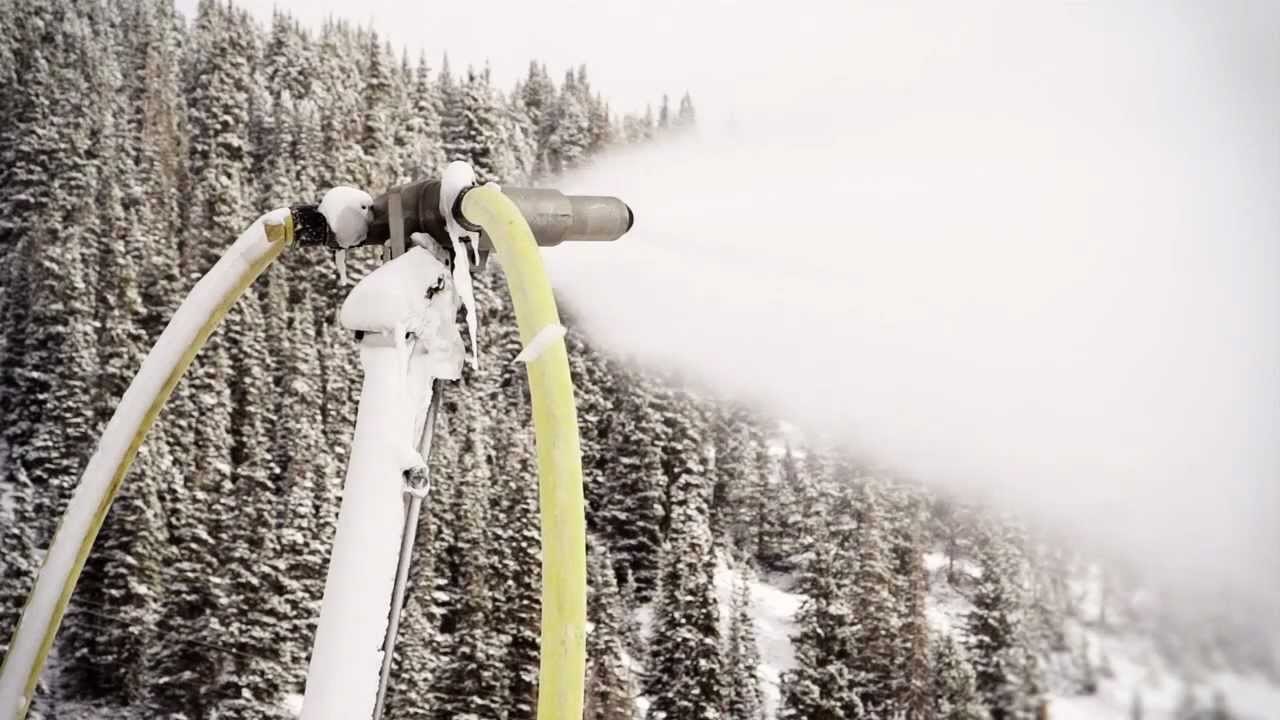 When real snow forms in nature, on the other hand, the heat is given off way up in the air someplace where the snow was created, and it doesn’t significantly warm up those beloved slopes. That’s why at many ski resorts the snow-making machines do their spraying from high towers, letting the wind carry off the heat.

In any event, some extra cooling is necessary to counteract the heat that is released on freezing. The machines accomplish this by spraying not just water, but a mixture of water and high-pressure air, at around 118 pounds per square inch.

When compressed air, or any gas for that matter, is allowed to expand suddenly, it gets cold. By pushing aside the atmosphere or anything else that it’s expanding against, gases use up some of their energy. The coldness of the expanding air more than makes up for the warming that comes from the freezing water. And then for good measure, the blasted-out water droplets are cooled further by evaporation.

Strangely, though, no matter how cold the water gets, it won’t spontaneously freeze. Everybody says that water freezes at 32 degrees Fahrenheit (0 degrees Celsius), but they should add, “provided that something stimulates it to begin the freezing process.” Water molecules can’t begin to settle into the highly specific orientations and rigid positions that they must have in an ice crystal without some kind of “starting gun” to shake them into place.

It’s a fact that water can be cooled far below its normal freezing temperature,  that is, it can be substantially supercooled, without freezing. It is much too tricky to try at home, but under careful laboratory conditions, pure water can be supercooled down to 40 degrees below zero without freezing. (Fahrenheit or Celsius, it doesn’t matter; 40 below happens to be 40 below on both scales.).

A mechanical shock can shake up the molecules in supercooled water droplets enough to make them fall into their assigned places in an ice crystal. In the case of the snow-making machine, the shock is supplied by the high pressure air blast, which shoots the microscopic droplets of water out of nozzles at near-sonic speeds.

An interesting new wrinkle in snow-making machines is the addition of a certain species of harmless bacteria to the sprayed water-air mixture. It has been found that these bacteria, which live on plant leaves almost everywhere, help water to freeze more quickly. In doing so, they may be helping to save the plants from frost damage.

They apparently perform the same quick-freeze service in the snow-making machine, producing a greater yield of artificial snow by freezing more of the tiny water droplets before they have a chance to evaporate.