The Puffer Fish, or Blowfish blows itself up to defend itself against its enemies.

When it is threatened, the Puffer Fish will turn itself into a large ball covered with sharp spines. Hopefully, the enemy is unable to swallow the inedible ball and swims off. 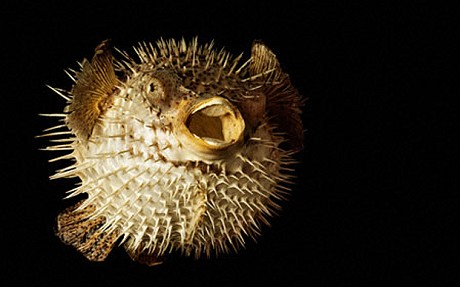 The spines stick out of its body only when it has inflated itself. Usually, the spines lay flat against its skin and can’t be seen, because they are the same color it is.

When the enemy leaves, the Puffer Fish spits out the water and air it has taken in and changes back to a regular looking fish.

Almost all Puffer Fish contain a toxin called tetrodotoxin, which is foul tasting and often lethal to fish. To humans, tetrodotoxin is 1,200 times more poisonous than cyanide. There is enough toxin in one Puffer Fish to kill 30 adult humans, and an antidote does not exist.

The meat of some Puffer Fish is considered a delicacy in Japan. Called Fugu, it is extremely expensive and only prepared by trained, licensed chefs. If not properly prepared, it would be almost certain death for a customer.

Many deaths occur annually as a result of this.

1 thought on “How Does a Puffer Fish Defend Itself?”