How does a Vacuum Meat Marinator work and Do Instant Marinators speed up Marinating?

There are a number of vacuum gadgets on the market that purport to speed up marinating. Even some commercial meat processors use them. But they’re pure deception.

You’re supposed to put your meat into a sealed container and pump most of the air out with a small hand-operated or electric pump. The idea is that as the air is sucked out of the meat’s pores and channels, they’ll absorb the marinade more quickly, “in minutes, not hours.”

I never really bought this idea. 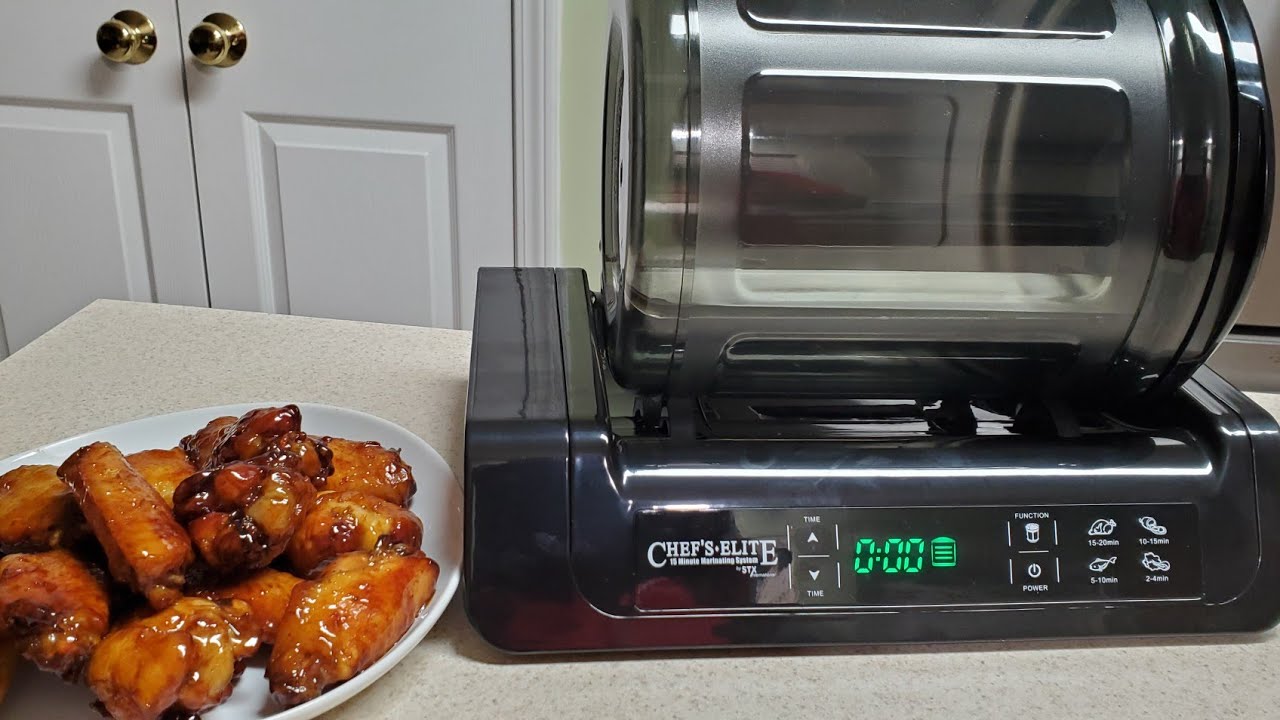 Just think about it. Sucking the air out of channels in the meat would collapse them, not open them up. It’s like attaching a vacuum pump to a garden hose. Moreover, because the degree of vacuum (the air pressure) is the same everywhere in the container, in the meat and in the space around it, there is no force that could induce the liquid to flow from one location to the other. It’s like expecting water to flow through a hose without any force, such as gravitation or a pressure difference, propelling it.

What does the research say? L. L. Young and D. P. Smith of the USDA’s Agricultural Research Service (Poultry Science 83:129-131, 20o3), marinated 256 chicken half-breasts either with or without vacuum for 30 minutes. They found that the vacuum increased absorption of the marinade slightly (by about i0 percent, according to an earlier study by the same group), but that “the added marinade is lost prior to or during cooking.” Their conclusion: “Under the conditions of this study, vacuum appears to offer no real advantage over marination without the vacuum.”

I decided to run my own experiments to see if I could tell what was actually happening to the meat. Instead of buying a, no kidding, Rhyme of the Instant Marinator (haha) for $24.95 plus shipping, I built my own from a clear glass vinegar bottle and a VacuVin: a pump-and-stopper device for pumping air out of partially empty bottles of wine, presumably so the wine doesn’t oxidize when kept for several days before being tapped again. (I haven’t done tests to see if wine really does keep longer when the bottle is pumped out by the VacuVin, but I have my doubts. Nevertheless, it makes me feel sophisticated to use it.)

I put some mock marinade (water, vinegar, and green food coloring) into the bottle, added pieces of flank steak, inserted the VacuVin stopper, attached the hand pump, and pumped the air out. (It should be realized that a pump can reduce the amount of air in a container, but it cannot create an actual vacuum, i.e., a space with no air in it at all. All a pump can do is reduce the air pressure, producing a partial vacuum.)

As I pumped the air out, I was fascinated to see the pieces of meat float up to the surface of the marinade! Dozens of tiny bubbles had emerged from the meat as I pumped; they adhered to the meat’s surfaces and carried it upward like so many miniature life preservers. (The bubbles were too small to overcome their surface-tension-induced adherence to the meat and rise independently to the surface.)

Aha, then! Air was being sucked out of the meat’s pores and channels, collapsing them as I had predicted, rather than opening them up.

After five or more minutes of marinating in repeated tests, I let the air back in. The bubbles mostly disappeared, because the air pressure now exceeded the pressure inside the bubbles, and the meat pieces promptly sank.

But did they sink because they had lost their bubbles, or because they had become heavier by sucking some marinade into their evacuated channels like a squeezed sponge suddenly being released under water, and thereby accomplishing the marinating task after all?

I removed the meat from the marinade and shaved off thin slices with a razor blade. There was virtually no evidence of the green marinade inside the meat, although the connective tissue on its surface had been dyed.

So should you buy a vacuum marinator? No. Any slight amount of marinade absorption that may take place when you release the vacuum, regardless of how long the meat had been marinating, is likely to be lost when you cook it, as was found by the USDA researchers.

Don’t be sucked in by a “vacuum marinator.”