How Long does it take to Marinate Meat like Beef, Chicken, Pork, and Fish?

Marinating, from the Latin mare, meaning sea, is the soaking of meat, poultry, or fish in a liquid concoction prior to cooking it, in an effort to improve either its flavor or its tenderness. But for a number of reasons, there can be no set rules for marinating. The amount of soaking time depends on the type and acidity of the marinade and the size, shape, and texture of the meat, among other things.

Ever since a sea nymph named Thetis dipped her son Achilles into the River Styx to make him invulnerable, the concept of a curative or restorative bath has appealed to our human yearning for quick and easy remedies.

Innumerable spas and mineral-bath establishments around the world profit from this yearning by soaking their customers, both literally and figuratively. The “therapeutic baths” may consist of mud, cucumber puree, or Japanese stone juice. The fact is that a good soak in a hot bath of whatever composition (within reason) just plain feels good, and the customer goes away happy. 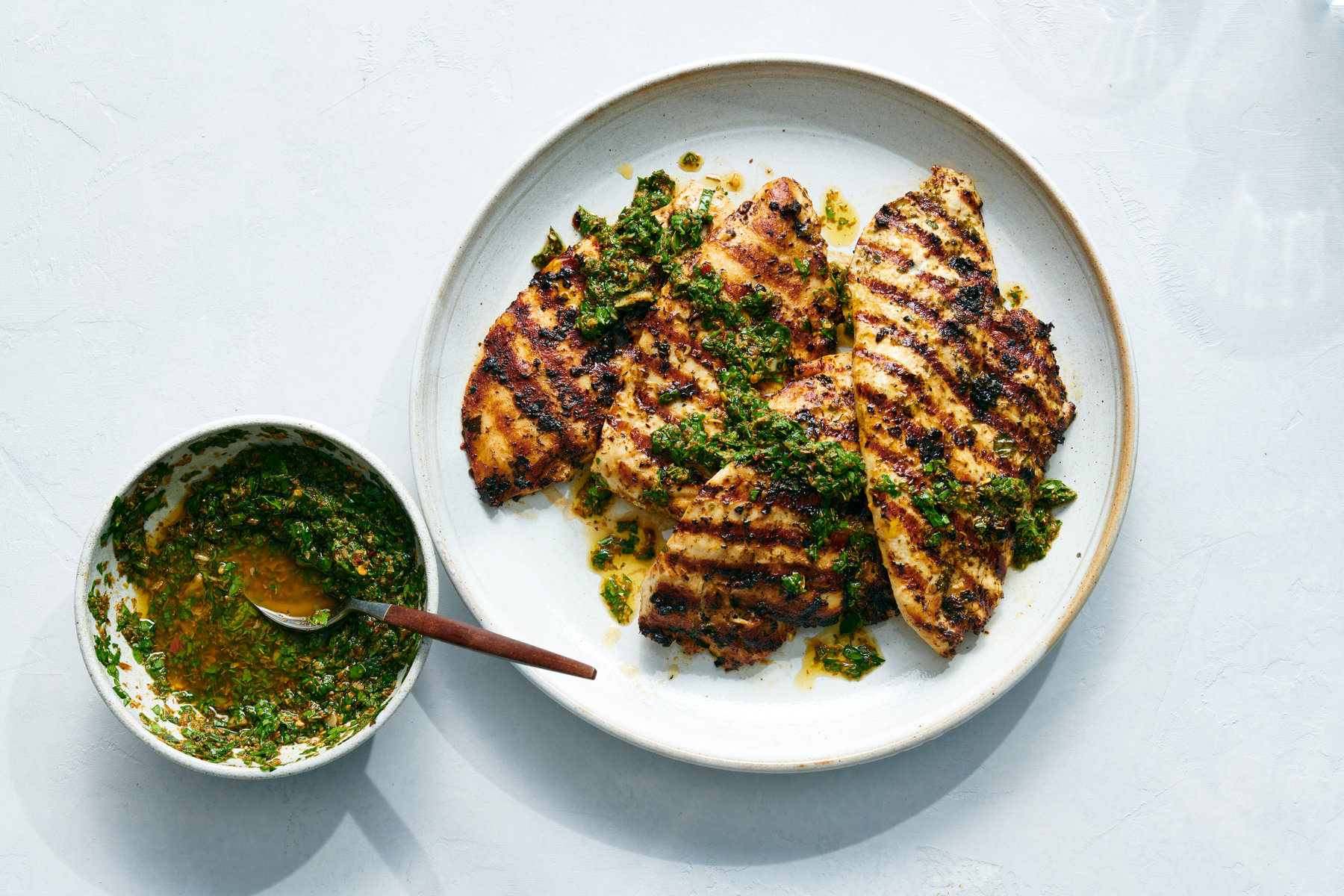 Unfortunately, the sources of our illnesses most often lie deep within our bodies, and “curative” elixirs simply don’t soak through our skins like ink into a blotter. (Remember blotters?) But that fact hasn’t kept the manufacturers of countless salves, balms, and ointments from claiming that they provide “deep, penetrating pain relief” or something along those lines. The most they can do is irritate the skin, whereupon the local blood circulation increases in an attempt to ameliorate the irritation, and the skin area feels warm.

And while we’re in the neighborhood of dubious treatments, let me note that magnetic fields do indeed penetrate people, but so what? The health claims for wraps and pads containing sewn-in magnets are, to stick to culinary terminology, pure bologna.

The point of this rant against quackery is that the soaking of meat, if you’ll forgive my sacrilegious characterization of the human body, cannot have an effect much deeper than its surface. And the same goes for marinating beef, pork, chicken, and fish, although, granted, we don’t marinate whole pigs, skin and all, the way we do people.

Marinades cannot infuse deeply enough into the meat, even without skin, to deposit flavor throughout its volume. Marinating is therefore primarily a surface phenomenon, the marinade’s ingredients penetrating no deeper than several millimeters (less than a quarter of an inch), depending on such factors as the density and structure of the meat, its cut, age, thickness, and temperature.

Fibrous or “stringy” meats such as flank steak, however, may offer capillary channels between the fibers for the marinade to travel through, especially when the meat is cut into small pieces across the grain at an acute angle. The angle magnifies the openings of the capillary paths, just as when you cut a drinking straw on the diagonal; the circular opening becomes an oval of larger area.

To test some of these ideas, I cut raw flank steak into  bars, with the grain running the long way. I cut the ends across the grain with a very sharp knife to open as many of the putative passages as possible without crushing their ends. I then soaked the pieces at room temperature for various periods of time up to an hour in a mock marinade consisting of water, vinegar, and green food coloring.

At the end of the marinating period, I removed the meat and cut very thin slices off their ends to see how deeply the green color had penetrated. In no case did it penetrate more than a couple of millimeters.

It certainly seems that the effects of marinades may be, like a spa’s “curative” waters, merely skin-deep, although longer marinating times might achieve somewhat deeper penetration. My one experiment does not a theory make. As I have written more than once at the ends of my published research papers, “further research is necessary to establish whether these results are generally applicable to other systems.” (Translation: “I need more funding.”)

That having been said and done, marinating meats has a long history and will undoubtedly persist as long as people perceive value in it. It does indisputably flavor the meat’s surface and affect its subsequent cooking. So I’ll continue to discuss marinating with the caveat that one mustn’t expect too much of it.

A flavoring marinade, as distinguished from a marinade intended to tenderize, may consist of a wide range of seasonings incorporated into a liquid or a mixture of liquids. Wine-based marinades are quite commonly used, often seasoned with herbs, spices, or other flavorings that one expects will remain on or in the meat and contribute to its flavor during cooking. The larger the surface area of a piece of meat, the more opportunity a marinade has to affect its flavor.

Thus, marinating is more effective for meat that has been cut into thin slices or into small cubes, such as for kabobs, than for thick steaks. Beyond a certain optimal point, marinating for a longer period of time will not effect deeper penetration; it can only intensify the flavor on the outer portions of the meat.

Contrary to common belief, stabbing the meat with a fork to produce punctures as entryways for the marinade is not only futile but counterproductive. Puncture wounds close up almost immediately because of the elasticity of the meat. Moreover, their latent tracks may later open up as the cooking heat shrinks the meat, thus creating exit paths for juices. Slashing or scoring a thick piece of meat before marinating, however, can boost its flavor by exposing more surface area to the marinade.

Marinades meant to tenderize tough cuts of meat almost invariably contain an acid, because acids deconstruct (denature) the proteins in muscle tissue. But that’s a slow process. Smaller cuts and shapes of fibrous meats will require less soaking time, but acidic marinades in general require longer times to tenderize meat than simply to flavor it.

The more acidic the marinade, the shorter its optimum tenderizing time will be. In order of increasing acidity, a marinade may contain yogurt, buttermilk, beer, tomato juice, wine, orange juice, vinegar, lemon juice, or lime juice. Tenderizing marinades usually also contain an oil, because meats that are tough tend to be lean and dry as well. (The “juiciness” of meat is due at least as much to fat as to water.) Prepared vinaigrette salad dressings can serve as a double threat marinade, because their vinegar tenderizes while their oil and condiments improve juiciness and flavor.

But how long, 0 Lord? With all of these variables, there can be no universal recommendation for marinating times. To quote conventional wisdom, however, most fish flesh is tender and somewhat porous, requiring short marinating periods of only 10 to 15 minutes. Dense-fleshed fish such as tuna and salmon may require twice that amount of time.

Chicken may require 2 to 4 hours if skinless and 6 hours or more with the skin on. Various cuts of beef and pork are usually marinated for anywhere from 4 to 8 hours, the latter period of time often being referred to as overnight. Leave it much longer than that and the acid in a marinade can reconfigure the meat’s protein molecules into tighter, more compact shapes, making the surface tougher. So don’t sleep too late. And don’t expect miracles. Tenderness is achieved only by selecting tender cuts of meat or by long, slow, moist cooking.

All of this having been said, the first law of marinating is Follow the Recipe. Any recipe worth its salt and pepper, taken from a reliable publication, has been tested and retested until it came out just right. The marinating time is simply another ingredient, like an amount of chopped onion or garlic, and shouldn’t be monkeyed with. (Except that in my opinion one can always add more garlic.)

The most convenient way to marinate meat, and for safety’s sake it must be done in the refrigerator, is in a sealed zipper-top plastic bag after you squeeze out most of the air to maximize liquid-to-surface contact.

If you want to use the marinade to baste with during subsequent grilling or to make a cooked sauce, set aside some of it for that purpose before you add the meat, because even in the best of households raw meat can harbor pathogenic bacteria. Discard the rest of the marinade after it has done its job on the meat.