How does Cooking with Wine add Extra Flavor to a Dish by Dissolving and Releasing Flavor components?

Chefs I’ve spoken with accept this idea as quite reasonable, and indeed it does seem to make sense on the surface of it, because many substances do indeed dissolve in alcohol but not in water.

Nevertheless, the statement is false. The real reason we use wine in cooking is simply that a good wine contributes its flavor to the dish. It has nothing to do with dissolving flavor components. 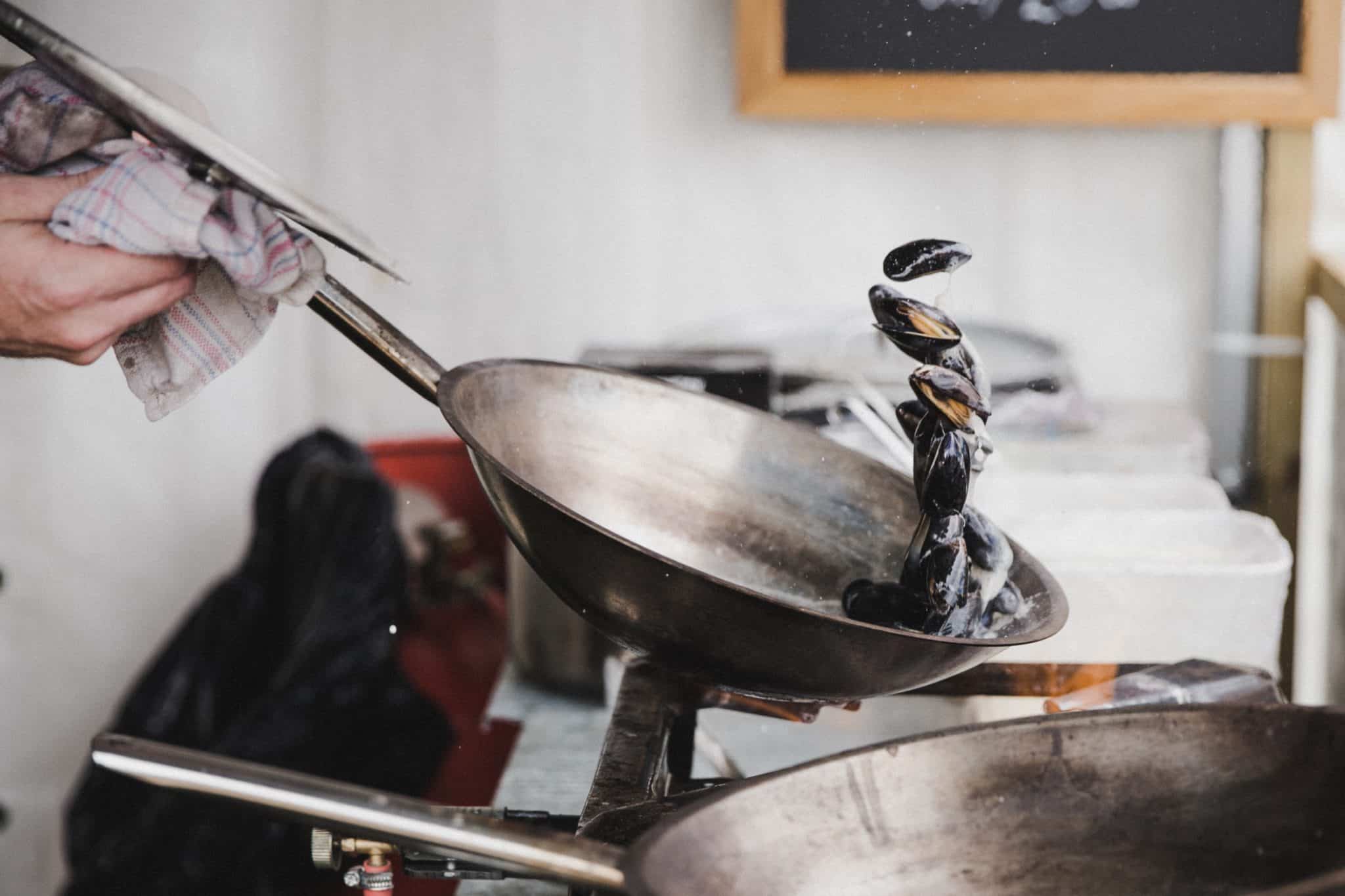 For example, if we mix equal amounts of alcohol and water, the mixture will be more than times as viscous (“thick”) as either the pure alcohol or the pure water. The reason is that alcohol molecules and water molecules attract and stick to one another by forming so called hydrogen bonds. They cannot flow as freely as the less hindered molecules can in either pure alcohol or pure water. The properties of the mixture, including what it can and cannot dissolve, vary as the percentage of alcohol varies. If a given substance dissolves in pure alcohol or pure water, that doesn’t mean it will dissolve in any given mixture of alcohol and water.

Is all of this mere theory? No. I did an experiment to test it. Annatto seeds, also known as achiote (ahcheeOH -te), are the seeds of the tropical evergreen shrub Bixaorellana. They are coated with a paste-like oil containing an intense yellow-orange carotenoid pigment called bixin, which dissolves in oils and in alcohol but not in water. Annatto’s bixin is an FDA-approved coloring for fatty foods such as butter, margarine, and process cheeses. In this experiment, I used the highly visible bixin to simulate an alcohol-soluble flavor component in a food.

I placed five annatto seeds into each of four small test tubes and added 15 milliliters (a tablespoon) of one of the following liquids to each tube: water, a chardonnay containing 13 percent alcohol, a vodka containing 40 percent alcohol (80 proof), and 95-percentpure ethyl alcohol. I let the tubes stand at room temperature for several days, shaking occasionally.

Here are the results: Neither the water nor the wine showed any dissolved bixin color at all; the water remained colorless and the white wine remained, well, white-wine colored. The vodka turned mildly yellow from a small amount of dissolved bixin, while the 95 percent-pure alcohol turned intensely yellow.

But that was at room temperature. What happens in the heat of cooking?

Nevertheless, the alcohol in wine can contribute to flavor beyond the flavors inherent in the wine itself. During cooking, the alcohol can react chemically with acids in the food to form fragrant, fruity compounds called esters. You can demonstrate this by vigorously shaking some denatured ethyl alcohol (available in hardware and paint stores) with vinegar (acetic acid) in a tightly sealed bottle. After shaking for several minutes, open the bottle carefully and sniff; in addition to the odors of the alcohol and vinegar, you will detect a fruity note of ethyl acetate, one of the esters in the aroma of pineapple.

In the cooking pot, alcohol can react also with oxidizing substances to form aldehydes, compounds responsible for flavors such as almond, cinnamon and vanilla. Both the esters and the aldehydes are new flavors that were not present in the original ingredients. And contrary to widespread belief, the alcohol never “boils off” completely. It has plenty of time to take part in these chemical reactions during cooking.

So enjoy your coq au vin and boeuf Bourguignonne. The wine will add flavor in several ways, but don’t expect it to “extract” or “release” any alcohol-soluble flavors from your food. And now that I think of it, why must we extract flavor compounds from our food, anyway? If they’re in there, they’re in there, and we’ll taste them when we chew, whether they are in the solids or the sauces.

For a soluble substance (a solute) to dissolve in a liquid such as alcohol (a solvent), the solvent’s molecules must surround each solute molecule (solvate it) like a swarm of hungry piranhas and drag it out into the liquid. But if the alcohol is mixed with water, the hydrogen bonds between them hamper the alcohol molecules’ ability to solvate the molecules of the solute. Thus, a mixture of alcohol in water cannot effectively dissolve what pure alcohol might be able to dissolve.

Moreover, the less alcohol there is in the water, the more its solvating prowess is weakened. For example, when you add half a cup of wine containing 12 percent alcohol to a quart of braising liquid, the alcohol concentration is reduced to 1.5 percent. The alcohol molecules are outnumbered by water molecules by nearly 200 to 1, so there just aren’t enough of them to cluster around and solvate the solute molecules. Too many water molecules are getting in their way.