How Does Perspiration and Evaporation Help Cool Us Down?

The answer is, “It does and it doesn’t.” Maybe that’s why people go around simply parroting the prefabricated, though hardly enlightening, answer, that “evaporation is a cooling process.”

We notice that our sweat glands are exuding a liquid water containing a little salt and urea, onto our skin only at certain times, such as (a) when we’re hot, (b) when we’re exerting ourselves strenuously, or (c) when we’re about to deliver a speech and can’t find our notes.

In reality, however, our perspiration process is always working, even in cold weather. It’s an essential mechanism for keeping our body temperature constant. In situations like a, b and c above, the perspiration is being generated faster than it can evaporate, so we notice the buildup of actual moisture on our skin. 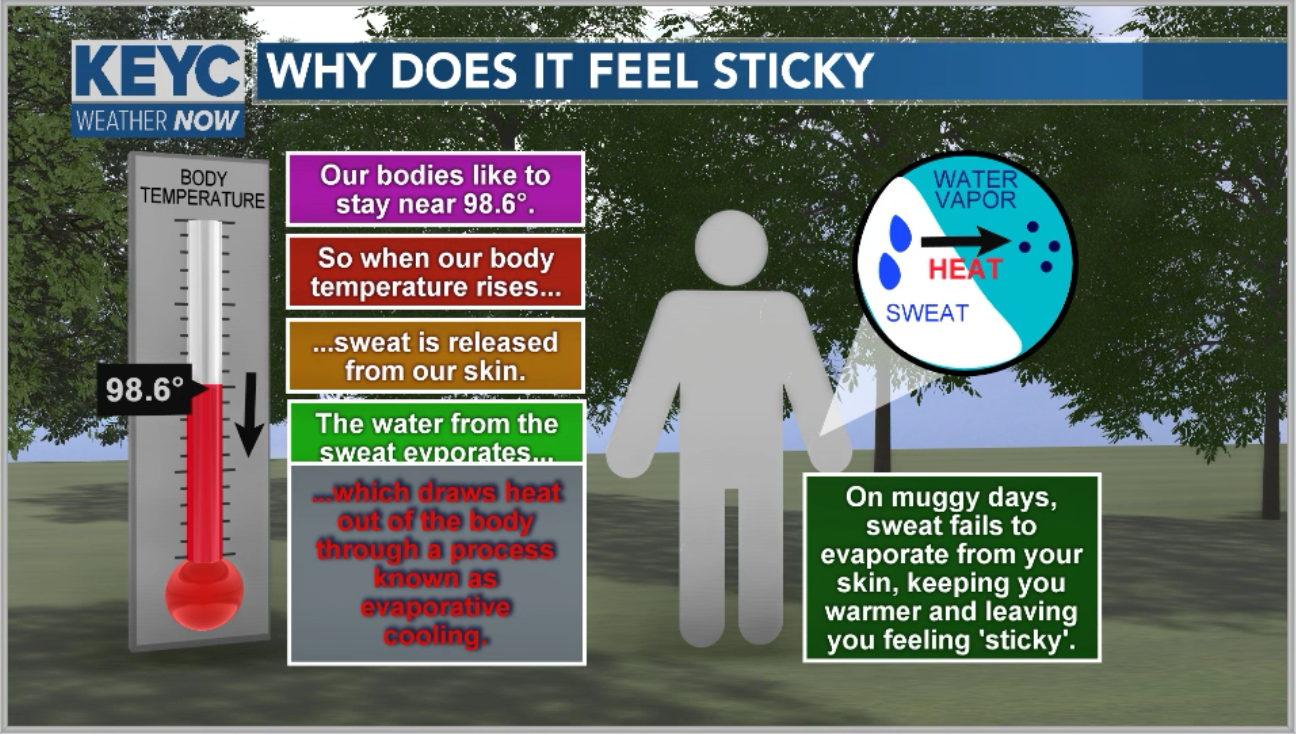 Dogs, being called upon much less frequently to deliver speeches, do not have sweat glands on their skin (except, oddly, on the pads of their feet). So they hang out their extraordinarily long tongues and pant, which hastens the evaporation of saliva, thereby cooling the air supply to their lungs. Other animals sweat to varying degrees. Pigs do indeed “sweat like pigs” on occasion, although they also like to cool off by wallowing in mud, as do elephants and hippopotamuses. Not much different, actually, from our own habit of taking a quick dip in the pool.

But what, exactly, is evaporation? It is the process in which certain molecules at the surface of a liquid simply decide to depart from their brethren and fly off. As more and more molecules leave, the amount of remaining liquid diminishes. You’ve seen it happen dozens of times: Wet floors dry up and laundry dries on the clothesline.

If we want to hasten evaporation, we can do two things: heat and blow. Heating the liquid gives more of its molecules the energy they need to escape. Hence we have hair driers and those abominable hot-air hand driers in public rest rooms. Their blowing disperses the crowd of just-evaporated water molecules and makes room in the air for more. Blowing on hot soup to cool it off is a classic, though inelegant, application of this principle. Another example: You’ll feel cold coming out of the bath if the room is drafty, even though the air temperature may be quite comfortable.

Blow on the back of your hand and it’ll feel cool, even though your breath Is warm and you may think you’re not perspiring.

Blowing speeds up the evaporation of the small amount of moisture that’s always on your skin. Outdoors, you’ll always feel colder when it’s windy. The “wind chill factor” that northern weather broadcasters love to frighten us with during the winter is an attempt to take this phenomenon into account. Unfortunately, it only applies when you’re naked.

Okay, so why should the exodus of water molecules lower the temperature of the remaining liquid, and therefore lower the temperature of whatever the liquid is in contact with? This may sound almost spooky, but the process of evaporation is highly selective. It preferentially picks out and removes the faster (hotter) molecules, leaving the cooler (slower) ones behind. Here’s how.

The molecules of any liquid are in constant motion: sliding around, jiggling back and forth, darting about, colliding with one another, and generally acting like a bowlful of ants. The higher the temperature, the faster the molecular motion (and the faster ants move, if you really want to know). In fact, that’s what temperature is: a measure of the average kinetic energy (energy of motion) of all the molecules in the substance.

The important word here is average, because at any given temperature, the molecules are by no means all moving at the same speed. Some may be moving very fast because they’ve just been kicked by a collision with another molecule. Meanwhile, the molecules that kicked them are moving more slowly because they have just given some of their energy to the molecules they hit. Go to the nearest pool table and you’ll see that the cue ball slows down substantially when it hits another ball, while the struck ball goes sailing away at high speed. But the average energy of the two balls, their “temperature”, remains the same.

Now, at the surface of a liquid, which molecules do you suppose are most likely to leap into the air and evaporate? The highest-energy ones, of course. And that will lower the average energy, the temperature, of the molecules that are left behind. Thus, as a liquid evaporates, it cools down.

But that’s not the end of the story. The cooling can’t goon without limit. Did you ever see an evaporating puddle spontaneously freeze itself solid? No, what happens is that as soon as the evaporating liquid begins to cool a bit, heat flows in from its surroundings and replenishes the population of high-energy molecules, which in effect keeps the temperature constant.

“Aha!” you say. “Then we’re back to square one. If the evaporating liquid never gets a chance to stay cold, why does evaporating sweat cool me?”

Well, where do you think that replenishment heat has to come from? Your skin.

As the evaporation proceeds, then, the sweat layer itself never does get a chance to cool down very much because it keeps taking up heat from your skin and throwing it off into the air in the form of its hottest molecules. The sweat is just a go-between, helping your skin to throw heat away.

The rate at which liquids evaporate depends on how tightly they are bound together in the liquid. In a liquid where the molecules aren’t very strongly attached to each other, they can leave the crowd more easily and the liquid evaporates more rapidly. Some liquids evaporate so fast-are so volatile, that replenishment of heat from the surroundings can’t keep up. In that case, the temperature of the liquid really does go down.

Ethyl alcohol is one of those volatile liquids. It evaporates more than twice as fast as water.

Put some alcohol on your skin (isopropyl, or rubbing, alcohol will do) and you’ll feel a much greater cooling effect than you get with water.

That’s because “hot” alcohol molecules are leaving at such a rapid rate that they out-pace your body’s ability to warm the area back up to body temperature.

Ethyl chloride is an extremely volatile liquid whose molecules don’t really want to have much to do with each other and are just dying to leave home. It evaporates about a hundred times faster than water. Put some ethyl chloride on your skin and it’ll get so cold that it numbs your sensations. Doctors use it as a local anesthetic for minor skin surgery.