How Does the Moon Always Keep the Same Face Toward Earth?

Sounds odd, doesn’t it? Either it’s the most colossal coincidence that ever occurred, or there’s something real fishy going on. Well, even the fishiest-seeming coincidences can have rational explanations.

Your first guess might be that the moon isn’t spinning on its axis the way Earth is, and that it just goes around us, maintaining the same orientation toward us. But it is spinning. And even if it weren’t, we would still be seeing all sides of it as it circled Earth. Here’s why. 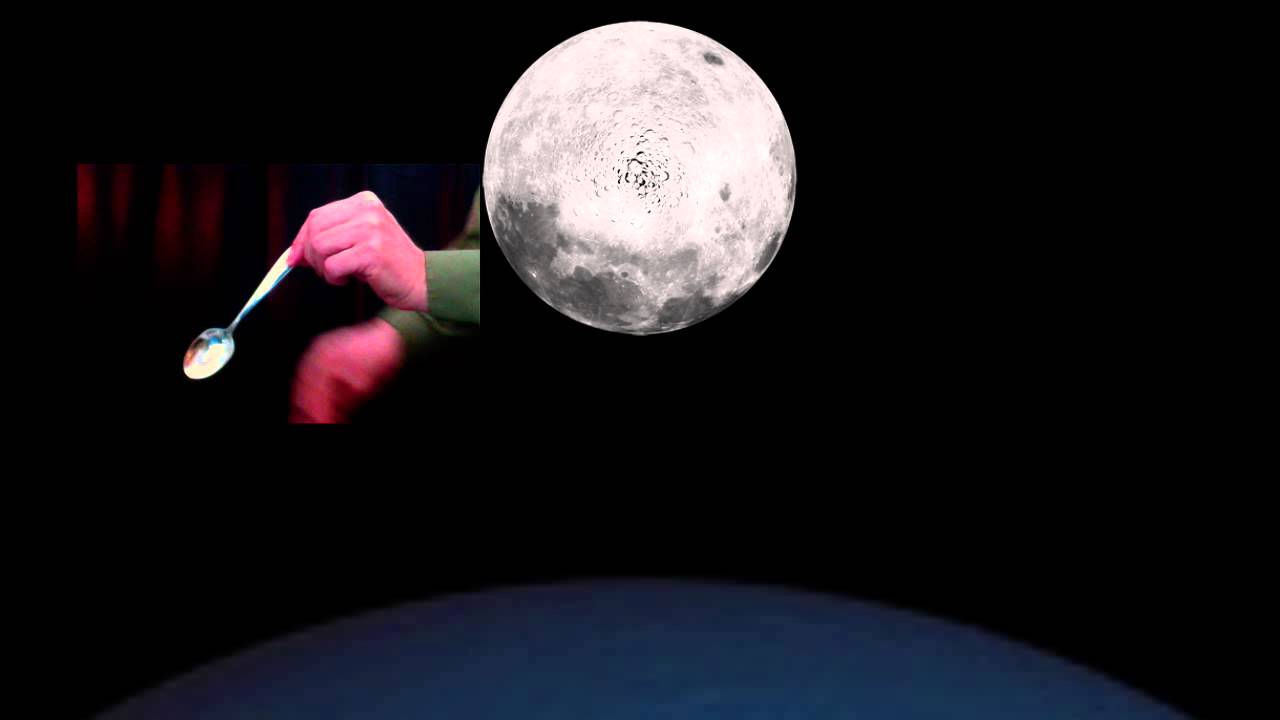 Let’s say that you’re the moon and your buddy is Earth. Stand several feet away, facing him. Now keep staring at the same spot on the wall, that is, don’t spin on your axis, and circle around him. (In square dance parlance, perform a do-si-do.) Notice that at some time during your circling, you can’t help showing him your backside. To avoid that, you’d have to keep facing him all the way around, and that requires that you rotate one full turn.

Then if the moon is indeed rotating while circling Earth, and yet keeps the same side always facing us, it must be turning at a perfectly synchronized rate: exactly one moon turn for each circle that it makes around Earth. How in the world can that happen?

Well, you know that the moon and Earth are tugging on each other gravitationally. You also know that the moon’s tug on Earth pulls the oceans up into bulges called tides. But what you probably never thought of is that Earth is also pulling up bulges on the moon, not bulges in its nonexistent oceans, but bulges in the moon’s very ground. Slight bulges, to be sure, but bulges nevertheless. Call them tides in the ground, if you wish.

This deformation of the moon by Earth’s gravity acts like a brake on the moon’s rotation. It’s as if Earth’s gravity were trying to hold on more tightly to the moon bumps because they’re a tiny bit closer. And that has a slowing-down effect. So even if the moon was spinning like a top billions of years ago, Earth’s gravity has slowed it down to its present crawl. We have grabbed the moon, tamed it and made it pirouette to our own tune.

And by the way, the moon is doing the same thing to our home planet, albeit to a much lesser extent because its gravitational pull is weaker. That is, by tugging on the oceans, the moon has been slowing down Earth’s rotation, making our days longer. About 900 million years ago an Earth day was only eighteen hours long. Back then, the labor unions were joyful, because anything more than six hours of work was considered overtime. White-collar workers weren’t so happy, though, because their annual salaries had to stretch over a 487-day year.

Let’s clean up a couple of points about the moon.

First of all, the moon doesn’t show precisely the same face to us all the time. Although it keeps spinning at a constant rate, it wobbles a little bit from left to right, teasing us periodically with a glimpse of its backside. Mooning us, so to speak.

More surprising, perhaps, is the fact that if you really want to be picky about it, the moon doesn’t orbit around the center of Earth. That is, the center of the moon’s orbit does not lie at Earth’s center. The reason for that is that gravitation is not a one-way street, with Earth holding the moon in orbit. The moon also holds Earth, but not as strongly, of course, because of its smaller mass. You might say, then (and I will), that Earth is trying to orbit the moon to a slight extent. The result is that they’re each orbiting the other in a sort of whirligig dance.

It’s like two square dancers, a heavy man and a light woman, executing a swing-your-partner maneuver. Each is orbiting around the other, but the woman, being lighter, does most of the orbiting. Somewhere in between them there’s a fixed point that isn’t going in circles at all; it is the non-moving center of both orbits. That point will be closer to the man than to the woman, because being heavier, he is a better anchor for the whole whirling configuration.

We call that stationary point the center of mass of the couple.

It’s the same with the dance of Marilyn Moon with Ernie Earth. The center of both orbits, the center of mass of the Earth-moon system, will be much closer to Mr. Earth than to Ms. Moon. In fact, Earth is so much heavier than the moon that the center of mass will actually lie somewhere within Earth, somewhere outward from its geometric center.

To sum up: Instead of saying that the moon orbits Earth, we should really say that the Earth-moon system revolves around its center of mass.