Fleas are the best jumpers in the insect world. They can jump eight to ten inches high, many times their own height. 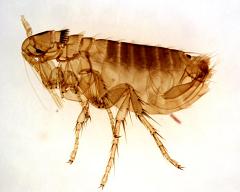 The tiny flea is a parasitic insect, one that lives on other animals. It is best known for living on dogs and cats, but fleas also live on other animals, such as rats, mice, birds, small rodents, and sometimes even on people. They live by sucking the blood of their host.

The flea uses its jumping ability to survive. It has strong, spiny, muscular jumping legs which it uses to get from place to place. When the adult flea emerges from its cocoon, it begins to look for a host, for it must have blood to live.

Some fleas jump toward objects they see moving, but it is also thought that fleas can sense when an animal is near from its smell. Some fleas can only live on certain types of animals. But most fleas pass from animal to animal.

High speed photographs of fleas jumping show that they can do somersaults in the air and even land on their hosts upside down!

6 thoughts on “How High Can a Flea Jump?”