Sharks are a fish with a full cartilaginous skeleton and a highly efficient streamlined body. 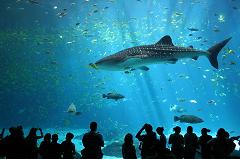 The earliest sharks that we know of evolved from more than 420 million years ago, before dinosaurs even existed.

Sharks have several sets of replaceable teeth, and popular species such as the Great White Shark are predators at the top of the food chain in the ocean.

Shark skeletons are different from bony fish and terrestrial animals because they are made of cartilage and connective tissue, similar to skates and rays.

About half the density of bone, cartilage is flexible and durable. This reduces the skeleton’s weight, increasing energy efficiency. A shark’s own weight can literally crush it if it ends up on land because it has no rib cage to support it.

It’s impossible to find fossils of shark skeletons because sharks don’t have bones, not because there weren’t any sharks back then.

Their body is supported by cartilage only, which doesn’t fossilize.

Scientists have found ancient shark teeth, however, indicating that many of the shark species living today are quite similar to species that lived during the Cretaceous period more than 100 million years ago.