How is radioactive nuclear waste disposed of and stored safely underground?

The answer is, not very well. Ridding the earth of nuclear waste that continues to emit radioactivity is a formidable, if not impossible, task, and experts disagree over how it should be packaged and where it should be put.

There are two general types of nuclear waste, low-level and high-level. Low-level waste is composed mainly of the by-products of nuclear reactors, such as contaminated work gloves, tools, and irradiated reactor components.

Such waste need not be shielded from personnel and does not require heat-removing equipment. Often it is filtered (much like coffee), reduced to sludge and burned in incinerators. The resultant gases contain very little radioactivity, but the ashes must be treated as low-level waste and buried. 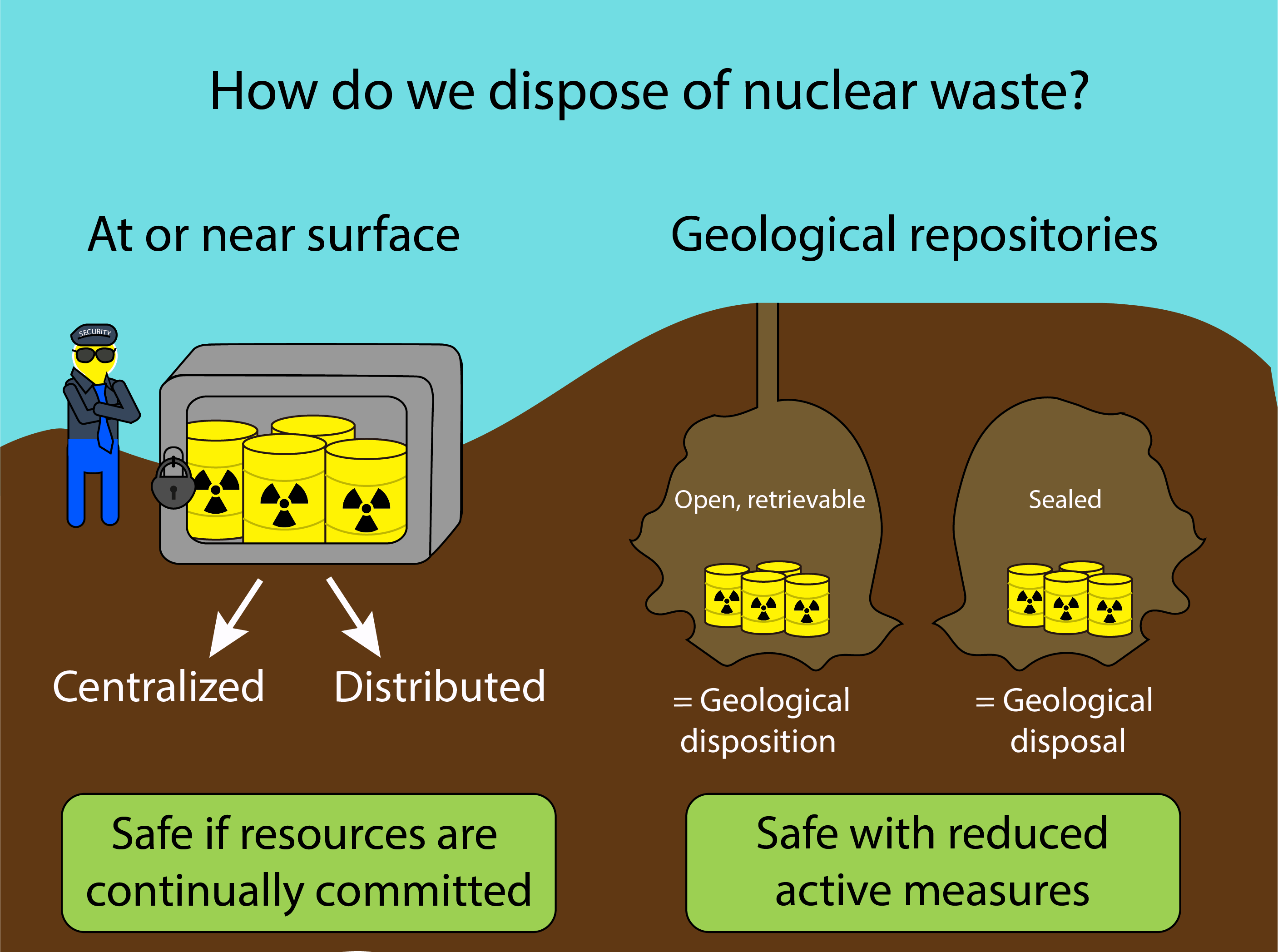 Some low-level waste is compacted in order to reduce its volume and produce a more stable structure for disposal; some is
solidified by mixing it with concrete or asphalt to resist attack by water and make the waste less subject to leaching or seeping out.

Next, the low-level waste is packed in reinforced plastic-and concrete or steel containers and buried twenty-five feet or more beneath the surface. Much of this burial (called shallow land burial) is currently done on-site, but efforts are under way to find permanent burial places that are not subject to volcanoes, earthquakes, landslides or excessive weather and are far from commercial and housing sites.

Moreover, such areas must have a water table deep enough to prevent immersion of wastes, and contain no springs to bring contamination to the surface. Of course, these areas must never be mined.

Alternative methods of disposal being considered for low-level waste include below-ground vaults with a drainage channel (to prevent water gathering) and a clay-topped concrete roof. Above-ground concrete vaults, another option, would be more accessible and the waste more readily retrievable for monitoring purposes, but might be eroded by the weather, particularly by acid rain. Some experts favor sinking deep into the ground a shaft with radiating corridors at the bottom for storage.

High-level waste consists mostly of liquid from defense production and of used fuel rods (produced from uranium) that have powered nuclear reactors for three to four years and continue to be radioactive long after their fuel is spent. These materials must be immobilized before being placed underground.

Spent fuel rods, which are hot and highly radioactive, are stored underwater in large pools or stacked in racks at the reactor site until they cool down sufficiently to be packed into containers and buried. Liquid waste must be mixed with some material that will resist water or any other solution that may be underground.

This material must also be immune to heat and radiation from fission decay. Most liquid waste is combined with borosilicate glass containing glass-forming chemicals. The mixture is then heated to 1,150 degrees Celsius, which not only destroys organic matter but also dissolves inorganics into the glass.

Interment is a problem because high-level waste remains radioactive for centuries (eighty thousand years for plutonium). So far, burial in salt has been the preferred choice because it is abundant, far from earthquake zones and inexpensive to excavate.

If a hole could be made sufficiently deep, say six to ten miles below the level of moving groundwater, other types of terrain could be considered, but little is known of geologic activity at that depth. Scientists are considering dropping high-level waste onto rocks a mile beneath the earth; the rocks would melt from radioactive decay, mix with the waste, solidify and finally, cool down after a thousand years.

Another remarkable solution still in the testing stages is hydrofracturing: first, water is forced into rocks such as shale, causing the layers to separate, then the waste mixed with cement or clay is pumped into them and left to harden.

Scientists have dismissed the idea of shooting waste into the sun or space and letting it orbit, because of the likelihood of accidents. Allowing decay heat to melt through either polar ice cap, which would then form a freeze seal above it, has also been rejected because of difficult weather conditions and the problem of coordinating different countries involved in such a project.

Solutions for the safe disposal of nuclear waste should be found before we permit more of it to accumulate. We have not yet disposed of waste produced from World War II.

Although the Nuclear Regulatory Commission claims that the hazard from nuclear waste which seeped out of single-walled steel containers buried in shallow trenches was not a widespread threat, it nevertheless contaminated the surrounding earth and air and has caused certain areas, in Washington State and New Mexico for example, to be designated “sacrifice” zones.

The sad fact is that although billions have been spent in the last forty years on producing nuclear defense weapons, only $300 million has gone toward researching and testing what to do with the deadly waste that is left behind.