How Long is the Giant Panda Bear’s Gestation Period and How Many Babies Does a Panda Give Birth To? 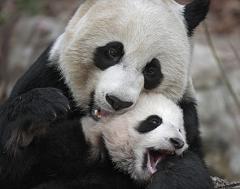 The panda has a delayed implantation cycle in which the fertilized egg can float free for anywhere from one-and-a-half to four months before implanting in the uterus.

Baby pandas are pink, naked, and very small, weighing a mere three to four ounces at birth and looking, according to one expert, “like ill-designed rubber toys.”

A panda mother often gives birth to two cubs, but she usually abandons one to die.

She takes care of her baby so intensively, holding it safely in her massive paws almost continuously for four to five months, that two would be too much.

Although it sounds cruel, the second baby seems to be simple insurance in case the firstborn is not healthy enough to survive.