What Do Giant Panda Bears Eat and Are Pandas Carnivorous Meat Eaters?

The giant panda bear’s diet is almost exclusively bamboo, but they will eat honey, eggs, fish, bananas and oranges when available. 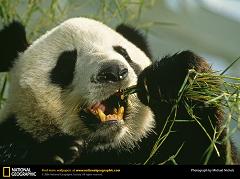 Giant pandas, although cute and cuddly, are related to carnivorous bears, and in fact have a digestive system, a simple stomach and short intestines, designed for meat eating.

How and why they became bamboo eating bears is a mystery that has not yet been solved.

One of the problems is that the panda’s digestive system isn’t really well suited for bamboo, which passes through its body in only five to eight hours, so the panda actually digests only about 17 percent of the vegetation it eats, a typical herbivore, in comparison, digests about 80 percent.

Furthermore, bamboo doesn’t have much nutrition to begin with. As a result, to keep from starving, pandas have to eat an enormous quantity of bamboo, as much as 85 pounds a day, necessitating a near-constant cycle of sleeping and eating, both day and night.

Their bamboo fixation has cost pandas in other ways.

They will usually eat only certain varieties of the bamboo plant.

Species of bamboo die off in a cyclical pattern, and when the pandas’ choice of species becomes unavailable, they can starve in large numbers.

Still, individual pandas have been seen eating other plants, chickens, and even, in one case, a leather jacket.

They have the reputation for entering villages and chewing and licking cooking pots, which, 2,500 years ago, inspired the folkloric belief that their diet consisted of copper and iron.

Despite their pickiness with bamboo, if allowed access to human habitation, many will quickly adapt to human food, from porridge all the way to pork.

Pandering to the Bamboozled Masses.