Domesticated sheep have descended from wild sheep native to Asia. 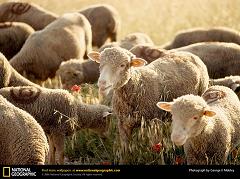 Sheep are an important part of the global agricultural economy, but they have been replaced in most part by other livestock species, such as the cow, chicken, and pig.

A sheep’s wool is the most widely used of any animal, and is usually harvested by shearing.

The Spanish Empire gained great wealth breeding the fine-wooled merino sheep, and this helped finance the voyages to the New World by conquistadors.

Wool was one of the first textiles, but its use in the late 20th century declined as the result of the popularity of synthetic fabrics, and prices began to fall dramatically.

These days, the sale of meat from sheep is more profitable than wool production.

A good woolly sheep produces about seven pounds of wool a year.

Give or take a pound or two, that’s enough to make a nice suit.