When Were Sheep Kept at The White House in Washington DC and Which President Owned the Flock?

There were once sheep grazing on the White House lawn. 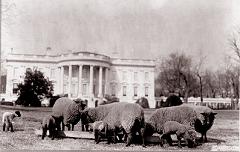 Woodrow Wilson had a flock there during World War I, and sold wool to help raise money for the Red Cross.

The sheep produced almost one hundred pounds of raw wool for the war effort.

The flock of eighteen sheep also helped with White House expenses during the war by trimming the lawn.

It was believed that the Wilsons also kept chickens.

No known charity benefited from the coop.