Skunk spray or musk is not dangerous or poisonous to humans or animals such as dogs. 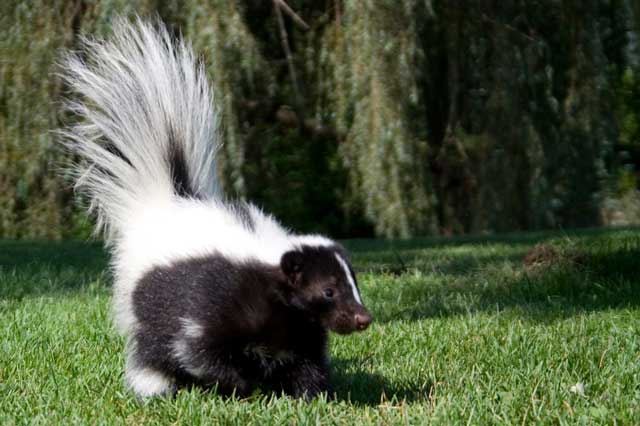 However, to animals who depend on their sense of smell to hunt food, find and attract mates, or avoid predators, being sprayed makes them unable to pick up scents of any kind, leaving them vulnerable.

There are 10 species of skunks, which are divided into four genera or families, and 8 skunk species inhabit North America, Canada and central South America.

Skunks were formerly classified as a subfamily of ferrets, weasels, otters, badgers, and other relatives. However, recent genetic evidence suggests that the skunks are not as closely related as previously thought, and they are now classified in their own family.

Skunks are omnivorous, eating both plant and animals like insect and larvae, earthworms, small rodents, lizards, frogs, snakes, and even birds. They also love berries, leaves, and nuts, and are fond of human garbage in urban areas.

Skunks usually only spray their smelly musk as a last resort because they only have enough of the chemical for five or six uses, and require about ten days to produce more. Their bold black and white coloring is often enough warning for other animals to stay away.

Skunks will go through a routine of hisses, foot stamping, and tail-high postures before resorting to the spray.

The best bet for washing and getting rid of a skunk’s smelly musk is peroxide formula or other common remedies that break down the thiols in the musk.