Is There a Relationship Between Breast Size and Volume Of Lactation and How is Milk Production Controlled?

There is no relationship between breast size and volume of milk.

The female breast contains fifteen to twenty lobes of milk-secreting glands embedded in various amounts of fatty tissue, which is not involved in milk production.

Instead, it is controlled by hormones produced during and after pregnancy that stimulate the milk-secreting glands, and the nursing infant’s demand is the key to how much milk is produced. 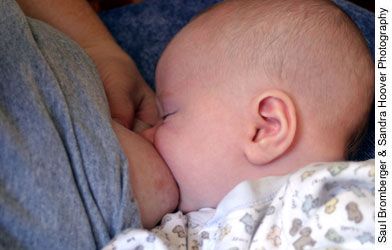 During pregnancy, estrogen and progesterone produced by the placenta make the milk glands enlarge and develop, but suppress the production of prolactin, the hormone that stimulates milk production.

Around the time of childbirth, there is a surge of prolactin from the anterior pituitary gland, and the milk glands produce a watery fluid called colostrum, which contains protein and antibodies that protect an infant from infections.

After about three days, the colostrum is replaced by milk.

As a baby suckles, there is a feedback mechanism in which nerve impulses stimulated by the sucking travel to the anterior pituitary gland, where prolactin is released and carried in the blood back to the breast, where it maintains milk secretion.

At first, too much milk may be produced, but before long a balance is achieved.