We humans are an omnivorous lot, with teeth and digestive systems well adapted to eating both plant and animal foods.

But animal rights activists notwithstanding, it’s an undeniable fact that in our society, meat and fish are most often the center of the plate, the star players in our main dishes.

Of the virtually unlimited number of animal species on Earth, perhaps only a few hundred have been routinely hunted, trapped, or fished by humans for food, and only a small handful of those have been domesticated. 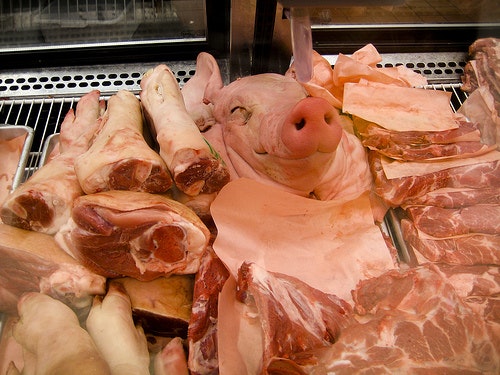 In our contemporary Western society, we routinely consume even fewer. Walk through the meat department of a supermarket and you’ll rarely see more than four general kinds of meat: beef or veal, lamb, pork, and poultry.

On the other hand, some five hundred species of fish and shellfish are available in the United States, with more than twice as many available worldwide. The seas contain an unimaginable variety of edible species, yet we have only scratched the surface (the depths?) in domesticating them, that is, in “farming” them in commercially significant numbers.

Our relative dearth of choice, then, is not because of any lack of diversity in Nature, but because of self-imposed cultural and economic limitations. Many of us have sampled such other-cultural delicacies as grasshopper, rattlesnake, alligator, cockle, sea urchin, and sea cucumber, while many more of us have begun to enjoy rabbit, bison, venison, ostrich, and emu because of their growing commercial availability.

Nevertheless, it is still possible to classify our everyday animal foods into two categories: meat and fish.

Or, as some restaurants put it for expense-account customers who can’t make up their minds which expensive dish to order, Surf and Turf, a combination of lobster tail and steak that goes together about as well as anchovies and ice cream.