How much Meat do Americans Eat and What happens to Meat when you Cook it?

According to USDA statistics for the year 2001 , the average American consumed pounds of beef; 51.6 pounds of pork; 1.8 pounds of veal, lamb, and mutton; 77.8 pounds of chicken; and 17.9 pounds of turkey. all in terms of trimmed weight at the retail counter. That’s a total of more than 200 pounds of meat for every man, woman, girl, boy, and baby in the country, even counting vegetarians.

Does that make you feel full? 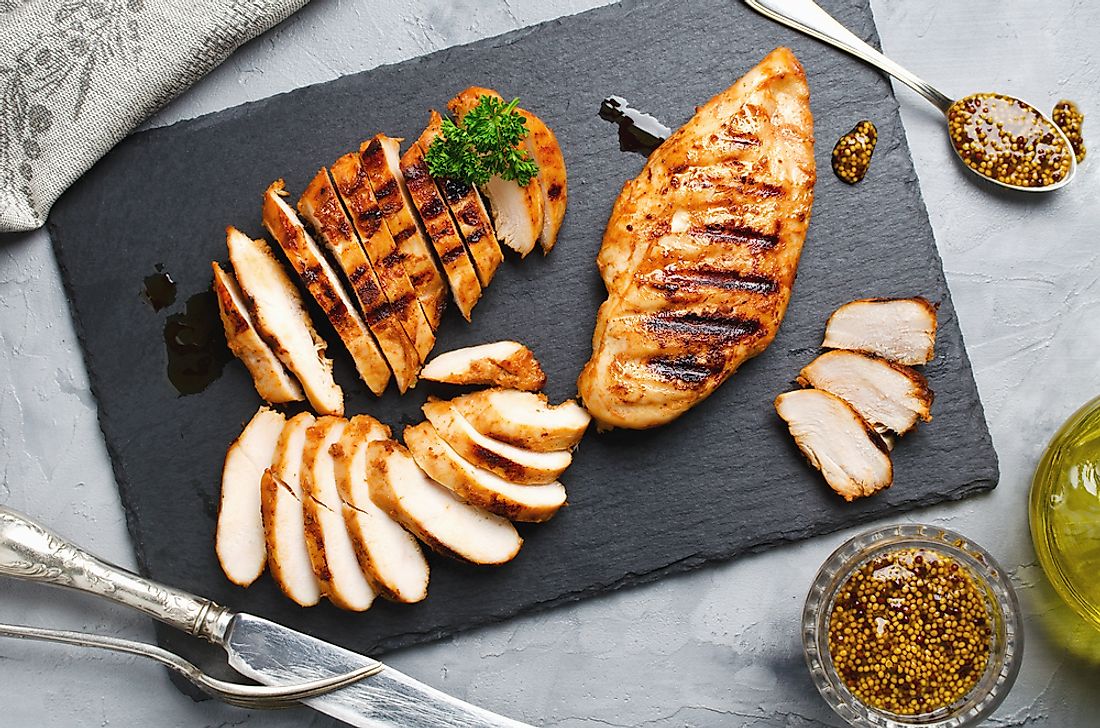 Technically, the word meat includes the flesh, or muscle tissue, of any animal, including fish and shellfish. But we will stick with two and four-legged creatures, that is, poultry and “red” meat, respectively.

Okay, the pork producers want us to call pork the “other white meat” because it isn’t as red as beef or lamb. The reason is that pigs are lazy. (Nobody ever tried to fall asleep by counting pigs jumping over a fence.) Because they are congenitally inactive, their muscles contain very little of the red, oxygen-storing compound called myoglobin that other animals stockpile in their muscles for sudden energy demands.

Along with muscles for movement and locomotion, most animals have bones for support and internal organs for sustaining the processes of life. So besides meat per se, we’ll talk a bit about using bones in stocks, and we’ll delve briefly into the edible but largely unappreciated (in this country) innards.

Differences among the world’s cultures are reflected in their attitudes toward meat, what meats are eaten, and how, and when. In the United States, our red meats come almost exclusively from three mammals: cows, sheep (lambs), and pigs. We may read with fascination and various degrees of dismay about cultures in which other mammals are eaten (including goats, rabbits, camels, horses, whales, and dogs), not to mention amphibians and reptiles (frogs, lizards, alligators, and snakes), or even insects (grasshoppers and grubs).

But at the same time, other cultures may feel repugnance toward at least two of our three favorite meats: beef is forbidden to Hindus, and pork is forbidden to Jews and Muslims. Much of the Catholic world eschews all meats on Fridays, while vegetarians reject them at all times, or, in the current vernacular, 24/7/52.

Nevertheless, meat is valued as the “center of the plate” on tables around the world, with regularity in wealthy countries and whenever possible in poorer ones. Cultures based on raising livestock for their renewable resources, milk and wool, cannot generally afford to kill their “golden calves” for the sake of a hamburger.

Let’s take a highly abbreviated look at the structure of meat and what happens when we cook it.

A mammalian muscle is made up of (surprise!) muscle cells, also known as muscle fibers. These long, skinny cells contain several nuclei apiece, and are packed together in parallel bundles inside an elastic husk (a sarcolemm a), like a bundle of uncooked spaghetti inside a garden hose. These fiber-filled “hoses,” still largely parallel to one another, are stacked together like a pile of logs to make up the muscle proper. That’s why meat has a fibrous texture, or “grain.”

Muscle tissue is made largely of protein. In a sirloin steak, for example, 57 percent of the dry weight is protein and, depending on how the steak is trimmed, about 41 percent is fat. The tiniest filaments within the muscle cells, called myofilaments, contain the actual protein molecules, which are mostly actin and myosin. When set off by chemical and electrical “move” signals from the nervous system, these protein molecules bond (cross-bridge) with one another to form tighter, shorter protein molecules, thereby making the myofilaments, and hence the whole muscle, contract.

But now, into the kitchen.

When we cook meat, the primary effect is that the protein molecules become denatured or reconfigured. That is, upon agitation by the heat, their convoluted structures unwind and then, generally, clump together by forming cohesive bonds. Known as coagulation, this clumping has several effects.

For one thing, the coagulation scrambles the neatly lined-up bundles of fibers in the muscle tissue, making the structures more tangled, random, and rigid. Second, the tighter structure of the reconfigured proteins squeezes out juices (muscle is 65 to 75 percent water) and dries out the meat. Thus, a steak becomes both tough and dry if cooked too long. Moderate cooking, however, has many virtues: it tenderizes meat, improves its flavor, improves its appearance, and makes it safer by killing microorganisms.

Now it’s time to eat. Meat is a valuable source of high-quality protein containing essential amino acids, and fats containing valuable fatty acids. That’s not to mention its abundance of iron and vitamins A and B. So grab that steak knife and let’s dig in.