Were there Honeybees in North America before the First European Settlers Arrived?

No, there weren’t any honeybees in North America before Columbus arrived. European settlers first brought honeybees to the American colonies in 1622. 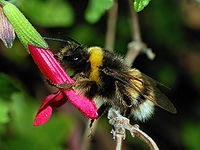 Over the coming years, many of the insects fled the regimentation of man-made hives and sought freedom in their own colonies throughout the New World.

By the late 1700s honeybees had settled along most of the eastern half of North America.

In the 1800s they fulfilled their manifest destiny by spreading their colonies from coast to coast.

A bee makes one to two ounces of honey in its lifetime, or roughly a tablespoonful.