From the moment the Sun King arose from his sumptuous gold bed, aligned with the rising sun at the centerpiece of his beloved Versailles, the château was alive with activity. 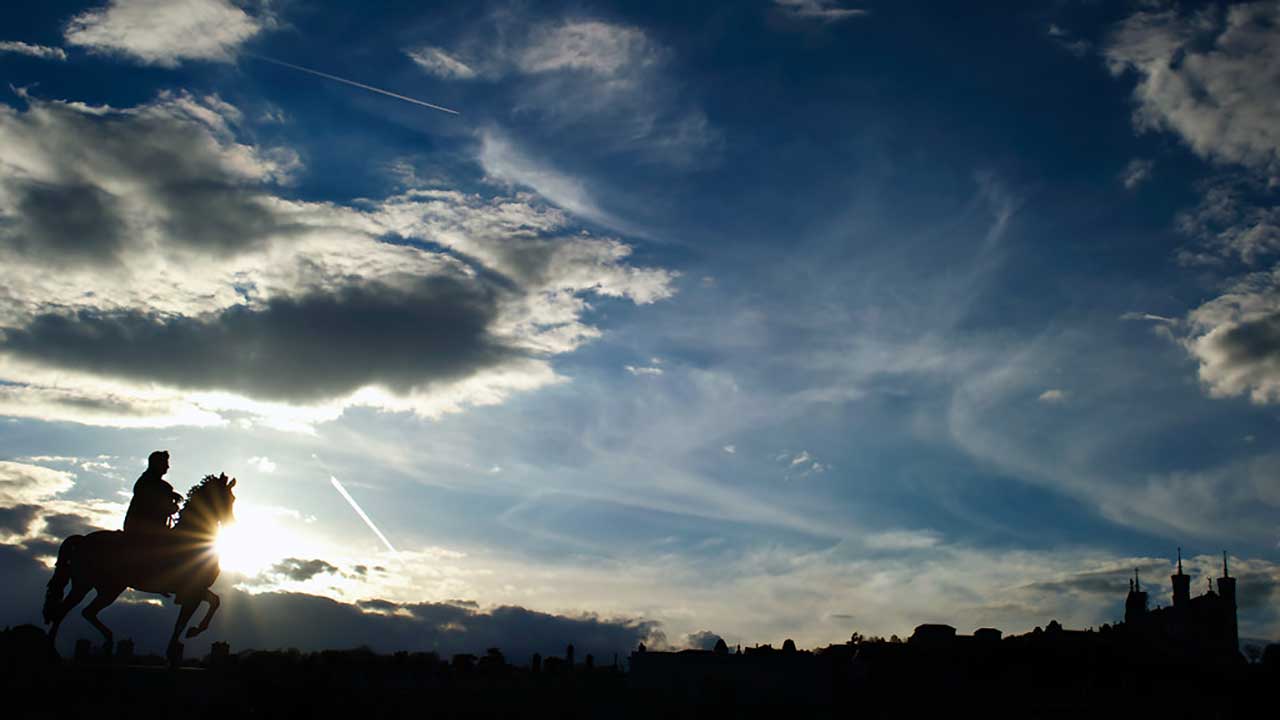 The life of every courtier, minister, lovely lady, doctor, and cook was finely tuned to the rituals of the King, his dressing, shaving, dining, meetings, and evening comedie, dancing or appartement when the halls were flooded with light and the courtiers played billiards, gambled, and ate sweets.

Living under a pretense of usefulness to Louis XIV and the government of France, the courtiers were largely a source of amusement to the King, whose favors and beneficence were vital to their well-being. “L’etat c’est moi,” said Louis with solemn conviction, and Versailles was a convincing illustration.

Louis XIV’s taste for massive architecture, yawning vistas, and spacious gardens was reflected in the realm of gastronomy, for his appetite was equally huge. “He had never known hunger,” reported the Duc de Saint-Simon, who lived in Versailles for 20 years, but “I heard him say several times that his appetite was whetted with the first spoonfuls of soup, and he ate so prodigiously, so substantially, and so equably morning and evening that one never tired of watching him.”

The King arose at about 8 or 9 A.M. and, after attending mass and meeting with some ministers, sat down for the first feast. At 2 P.M. a procession of dishes arrived and was served in his bedroom, where he sat gazing out on the gardens and the public, who wandered freely through the grounds and many of the chambers.

“I have often seen him,” said Mme. Maintenon, his second wife, “eat four plates of soup, a whole pheasant, a partridge, a large plate of salad, mutton au jus or a l’ail, two big slices of ham, a whole plateful of pastry, and, besides these, fruit and hard-boiled eggs.” She further commented that if she were to consume half this amount she would be dead in a week. The King devoured oysters by the dozen, supplied by his own private park, overseen by a man named Hyacinth Ox. He ate all sorts of fish, despite the fact it was transported over great distances and was not always in a state we would relish today. For a fresh supply of citrus, he maintained a grove of over 1,000 rare orange trees, planted in silver tubs.

“Everything (the King) ate,” recalled Saint-Simon, “was at least twice as highly spiced and pungent as is customary. Fagon (the doctor) was against sweets and spices and when he saw the King eat them he made very amusing faces. Yet he dared not say anything except from time to time to Livry and Benoist (the cooks) who replied it was their job to feed the King and his job to purge him.” Indeed, the King suffered from dyspepsia and later from gout. Others at court succumbed to gastric ulcers and frequent dyspepsia; they, unlike the King, also gorged on pastries, preserved fruits, cider, and lemonade between the lavish meals.

The King supped at 10 P.M., occasionally in public. On such occasions hordes drove from Paris, past peasants who during the famine of 1705-1708 lay dying by the road with only weeds and tree bark to eat, to file before the King and behold the spectacle of his feast. The courtiers competed for the honor of serving him, which entitled them to eat the leftovers but demanded that they sample each dish before it entered the King’s mouth.

For the second time in a day, there were boundless quantities of soup, meats, fish, salad, ripe fruit, and the inevitable hard-boiled eggs. Some 61 dishes-8 courses with 8 choices each—were prepared and passed before the King, from which he selected about 20. To the long, often fruitless hours of preparation must be added time spent bringing the meals to Versailles. In those days the château had no kitchens (or bathrooms): the food was prepared outside the château in the village and carried to the King, by which point it was all cold and either served that way or reheated on special burners. One can well imagine the resentment of the servants in the dead of winter, or of the hungry peasants who smelled the gastronomic delights as they passed by, and marvel that such an order was possible and would persist for decades to come.

Day after day Mme. Maintenon sat with the King, dressed in his habitual brown robes and undercoat studded with precious gems, as he waded through his gargantuan meals, hardly uttering a word. “It seemed,” she later remarked, “as if he had limited himself to a fixed number of words in his lifetime and was afraid of exceeding the limit.”

Whatever finery he wore, the King always ate with his fingers, and Saint-Simon marveled at his ability to eat chicken stew without spilling a drop. Individual forks had come into use only a century before in Italy and most European countries had not yet adopted them. Individual knives and spoons were now often supplied, whereas before the 16th century a communal spoon sufficed and one might bring one’s own knife. Louis resisted the fork, however, forbidding the Duke of Burgundy and his brothers from using it at his court, although they had been taught to do so.

When Louis XIV died in 1715 and the customary autopsy was performed, all were stunned at the size of his stomach and intestines, which was twice that of a normal man’s. It was discovered, too, that his enormous gut contained an enormous tapeworm.

This, however, was not responsible for his voracious appetite. If anything, tapeworms can cause a loss of appetite. Who knows what might have transpired had the King ever been hungry.