What Happens When you Cross a Camel With a Llama and What is a Half-Camel Half-Llama Called?

It is possible to cross a llama with a camel, but not easily. 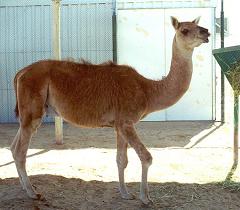 First, the basics. Camel sex is difficult, as far as these things go.

The male can’t do the do unless he is all the way into the she-camel’s cervix, not just the outside.

The female has to be totally receptive to sex, a condition she finds herself in more often than the male, actually, for this to even be attempted by the male, and the intercourse has to be rigorous enough to jar her body into ovulating.

After that, gestation is long, thirteen months, and it takes years before baby camels reach full maturity.

It’s no wonder then that camels, in general, are less interested in sex than other mammals that have a more rewarding time of it.

Trying to figure out a successful sexual experience between a camel and a llama makes the mind boggle. The size difference alone makes it nearly impossible to mate a large, aggressive dromedary with a small llama, or vice versa.

However, a crackerjack team of camel fertility scientists have managed to do it despite the odds, just without the actual physical contact.

Using artificial insemination, the first half-camel, half-llama was born in Dubai in January 1998. His name is Rama, since he was born under the full moon of the Ramadan holiday.

The scientific name for such a beast? It’s a Camelus-Lama hybrid, otherwise known as a cama.

Oh, what a world we live in.