The word “Jerky” comes from the Quechua or Amerindian word “Charqui”, which means dried llama meat, or llama jerky. 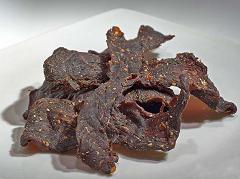 Charqui or charque, is a form of jerky popular in South America made from dried and salted horse or llama meat, and sometimes beef.

The people of the Inca Empire used a freeze drying process that used the cold dry mountain air and strong sun so the meat could be stored for a long period.

Llama jerky was supplied along the Inca road system for travelers, and it was also a very popular way to preserve meat in other parts of the region such as Peru, Uruguay and Brazil.

The word Charqui can also be spelled Charki.

1 thought on “Where did the Word Jerky Come From and What does it Mean in Quechua?”