If you’re concerned about being attacked or eaten by tigers, staying in America and away from zoos and circuses is a safe bet. 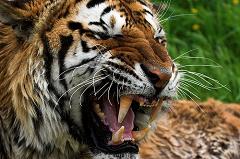 On their own turf, tigers can be a real menace, more so, even, than the other big cats.

For example, one female tiger in Champawat, India, was blamed for killing at least 436 victims over several years.

Even though people, who are bony and not that tasty, do not normally appear on the tiger menu, some tigers are lazy enough to make a meal of us slow-moving humans if we happen to make ourselves available for lunch, especially if they’re too sick or disabled to hunt for food they actually like.

In 1987 scientists found an easy, low-cost way of protecting people passing through the swamps and forests of tiger country, a mask worn on the back of the head.

Tigers make a habit of stalking and attacking their prey from behind, but if you wear a mask on the back of your head, you don’t seem to have a behind.

Several thousand natives have reported that a backward mask works like a charm, tigers followed them for a while, but became visibly confused and demoralized by the ruse, and ultimately slunk back into the jungle.

These are the benefits of being two-faced.