What is the best way to wash Fruits and Vegetables to Remove Germs and Pesticides on them?

Haven’t we become a bit of a paranoid society? Our drugstores and supermarkets cater to our fears (or do they encourage them?) by displaying dozens of antibacterial soaps, sprays, gels, lotions, hand washes, body washes, wipes, deodorants, and mouthwashes.

Television commercials strike terror in our hearts by suggesting that there might be a germ or two lurking in our toilet bowls. (Well, for crying out loud, where are those poor little germs supposed to live?) I call it “bacteria hysteria.”

What does this have to do with food? It sometimes seems as if there are more people who are afraid of their food today than people who are enjoying it. Are we becoming a nation of verminophobes, mysophobes, toxiphobes, and sitophobes? 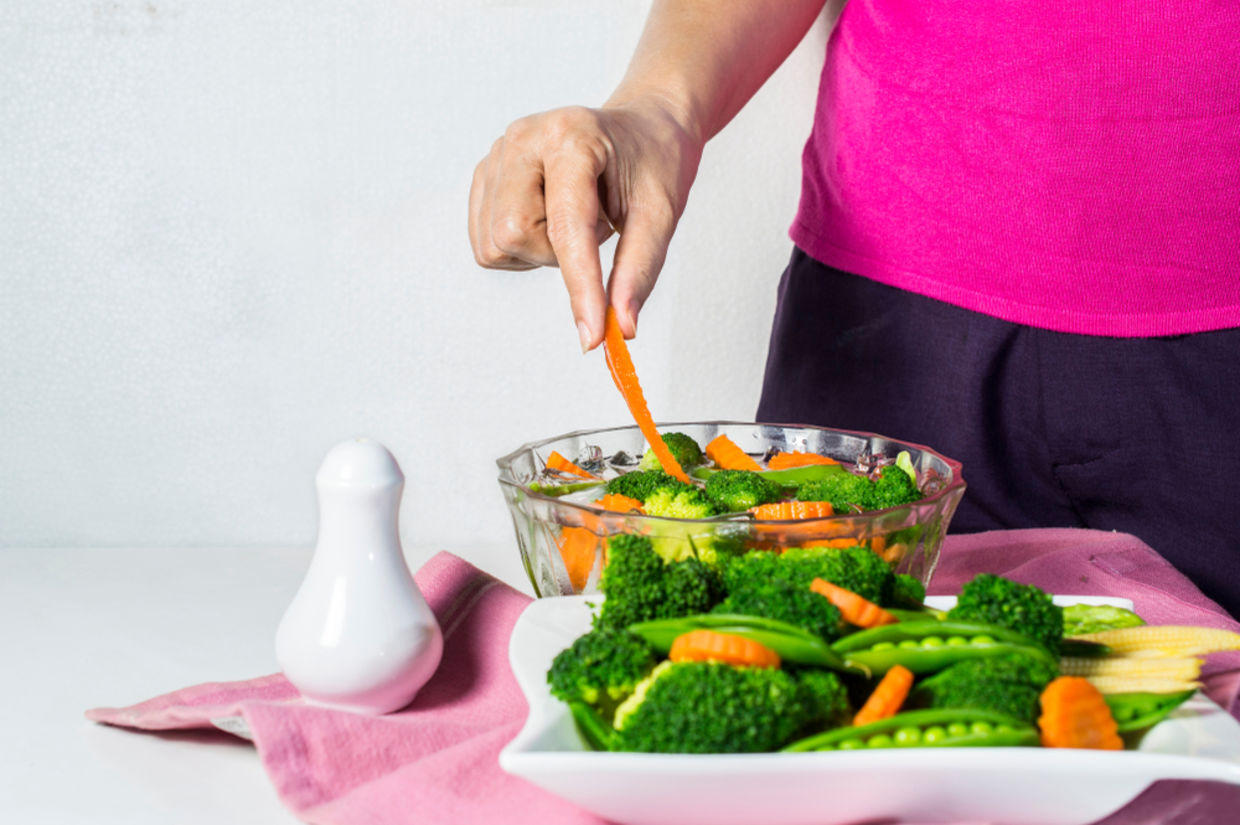 I generally avoid writing about health issues because I’m not a microbiologist, nutritionist, or physician. But I will say a few words about possible pathogens and toxins in or on our foods, in particular, on our fruits and vegetables. After all, they have inevitably been in contact with microorganism-harboring soil, and have possibly been subjected to agricultural chemicals such as weed killers and insecticides, not to mention manure and other “natural” fertilizers used to raise organic foods.

There have been several products on the market intended for washing our lettuce, scallions, tomatoes. apples, and such, presumably to remove both bacteria and toxic chemicals. In the fall of 2000, Procter & Gamble introduced a product called Fit Produce Wash, but they soon discontinued it and sold the formula to HealthPro Brands. At $5 for an 8.5-ounce bottle (no wonder it didn’t sell), it was a mixture of water, oleic acid, glycerol, ethyl alcohol, grapefruit oil, potassium hydroxide, baking soda. and citric acid.

Why these particular ingredients? The glycerol, alcohol, and oleic acid were presumably intended to dissolve and remove chemicals such as pesticides, which are generally insoluble in water. The potassium hydroxide attacked waxes, which are in any event approved by the FDA as harmless coatings for fruits such as cucumbers. As far as I can tell, the baking soda and citric acid were there only to react with each other to emit carbon dioxide gas, producing an AlkaSeltzer-like fizz to give the impression that the product was working hard.

Still on the market at this writing is Bi-O-Kleen Produce Wash, which “contains no animal ingredients” (should we have expected any?) and is “PETA approved” (but does it kill those poor little microorganisms?). It is made of “lime and lemon extracts, grapefruit seed extract, coconut surfactants, cold-pressed orange oil, and pure filtered water.” I don’t know if all those tutti-frutti ingredients do anything besides making the stuff sound yummy, but the “coconut surfactants” happen to be a synthetic (very unnatural) chemical called sodium cocoyl isethionate, a high-sudsing detergent used in soaps and shampoos.

Bi-O-Kleen has a couple of sister products. Veggie Wash claims to be “non-toxic, non-fuming. non-hazardous, non-caustic, and hypoallergenic” (and non-radioactive and non-explosive?). Organiclean contains “an anionic surfactant derived from coconuts”, very likely that same sodium cocoyl isethionate. All three products claim that they are more effective than plain water in cleaning fruits and vegetables.

Most experts, however, say that washing vigorously in running water is still the best bet. Running water will wash soil particles out of leafy greens, and that’s where the harmful bacteria, if any, are most likely to be hiding. Water won’t actually kill them, but neither will the produce-wash products, for that matter. If they did, they might leave residues of toxic (to humans) materials on the food. Moreover, if they claimed that they killed microorganisms, they would have to be tested for human safety and registered with the EPA as pesticides. (What irony!) So the produce washes sold to retail consumers are merely washes, not disinfectants. They’re especially good at washing money out of your pocket.

For skin-enclosed fruits, such as apples, tomatoes, pears, peaches, cucumbers, lemons, and oranges, a few drops of liquid dishwashing detergent applied vigorously with a brush and rinsed off well will do a good job of removing any contaminants. That’s an especially good idea for lemons and oranges if you intend to use their zest or peels in cooking.

One of the best defenses against bacteria on produce, which I employed when living in South America, is to wash the produce in a solution of about a teaspoon of chlorine bleach (a solution of sodium hypochlorite in water) per quart of water. Because the tapwater itself was suspect, I let the bleach solution stand for several hours before using it on the food, an unnecessary precaution here in the States.

Another safe and simple antibacterial treatment was devised in 1996 by food scientists at the University of Nebraska, Lincoln. It consists of spraying the produce with hydrogen peroxide solution (the 3 percent strength sold in drugstores as a disinfectant) and then with white vinegar, or vice versa. The two liquids mix on the food and react to release germ-killing oxygen gas. Any residual hydrogen peroxide on your lettuce will decompose quickly and is, in any event, tasteless, while any residual vinegar will give you a head start on the salad dressing.

Both the chlorine bleach method and the vinegar-and-peroxide method will also disinfect cutting boards and other food-preparation surfaces, especially after a scrub with detergent and a brush. If your cutting board reeks of chlorine after you use the bleach, a vinegar rinse will kill the smell.

While we’re on that subject, there are many commercial sprays in the supermarket for disinfecting everything from kitchen counters to entire bathrooms—but they are not meant to end up on our food. They contain alkyl dimethylbenzy ammonium chloride, a powerful catalyst that greatly accelerates the decomposition of esters and amides, which are major components of all living organisms from microbes to people. In high enough doses this chemical will kill us, but it is present in commercial disinfecting sprays at a concentration of only 0.2 percent. Nevertheless, disinfecting sprays and wipes should not be used on surfaces such as cutting boards that will come in contact with foods.