What is the Difference Between a Herb and a Spice and Where do they come from?

Spices enhance the variety of food around the world.

They can both be described as plant-derived food ingredients that yield large amounts of flavor from small amounts of substance. That operational non-distinction is really good enough in most situations, because knowing the characteristic flavors and uses of a spice or herb is far more important to the cook than knowing its botanical niceties. Nevertheless, there is a fairly reliable (though often muddied) technical distinction between herbs and spices.

The word herb comes from the Latin herba, meaning grass or green blades. To a botanist, herb is the term for all the soft, non-woody parts of plants. In common usage, though, an herb (or in Britain a herb) is any leafy plant material used for its flavor, aroma, or reputed medicinal properties. 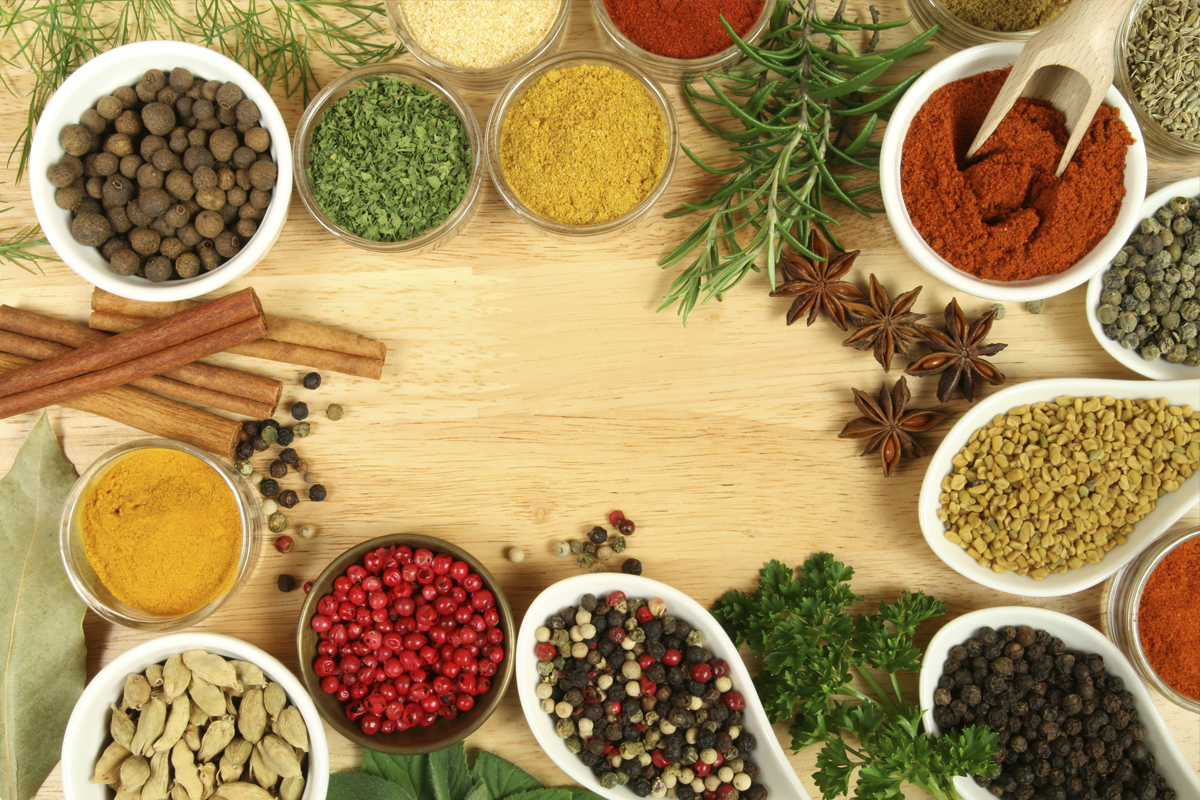 Herbs have historically been used not only in cooking but in mystical ceremonies and, allegedly, for healing. Today’s flood of “herbal remedies” and supplements is only the latest incarnation of the age-old snake-oil industry. For some reason, many people believe that if it’s “herbal” it’s “natural” and therefore healthful. (“Here, Mr. Socrates, drink this cup of hemlock tea. It’s an all-natural herbal supplement.”)

The word spice, on the other hand, has no scientific standing; it’s a catchall term for any plant material, usually excepting leaves, that adds strong aromas and flavors to foods. The word comes from the Latin species, meaning assorted merchandise, originally referring to the commercial goods imported from the Orient, of which spices were an important part. Spices may be roots, rhizomes, barks, seeds, fruits, or flowers, but most often they are seeds. Herbs are usually green and relatively mild, while spices can be brown, black, or red and have more pungent flavors.

Because most spices are native to tropical regions and herbs typically grow in temperate climates, cultural and linguistic differences often complicate the picture. For example, the cilantro plant and its herbal leaves are known by that Spanish name, but its seeds, called coriander in English, are a spice.

It would be nice to think that Nature created all those fragrant and flavorful botanical substances purely for our gastronomic delectation. But who do we Homo sapiens think we are, anyway? There must be some other evolutionary reason for plants’ having developed the special chemicals in herbs and spices that so delight us. And there is.

Most plants depend for reproduction on pollination by bees and other insects, whom they must attract by some combination of physical and chemical devices. The perception of flower colors is the major physical enticement, but chemicals are just as important. Many plants have developed fragrant chemicals called essential oils that are quite volatile, that is, that waft readily off into the air.

It may be noted in passing that flowers and perfumes are often a prelude to human reproduction as well.

Other plants contain unpleasant-smelling or tasting chemicals to repel foragers, and yet we humans find them pleasant when used in small amounts to flavor our foods.

Three families of plants provide the lion’s share of our culinary herbs and spices.

• The mustard family (Brassicaceae) includes radish, horse-radish, and many vegetables such as broccoli, Brussels sprouts, cabbage, cauliflower, kale, kohlrabi, turnip, rape, and rutabaga, all of whose leaves have a peppery flavor, although they are not generally used as herbs.

In a class by itself is the genus Capsicum, included within the family Solanaceae. Capsicums are the spiciest of all spices. They are the fiery New World hot peppers that, as we shall see, are neither hot in the literal sense nor peppers.

Because there are more than a hundred herbs and spices used around the world to add zest to foods, all I can do here is fly low over the landscape and point out a few notable landmarks. But if there is anything, and I mean anything,  you want to know about any herb or spice, try searching the Internet.