What Is the Difference Between Clam and Oyster Shells and Shrimp and Crab Shells?

We call them all shells because they are worn on the outside, but when we talk about “shellfish,” we’re including two totally different classes of animals: crustaceans and mollusks.

Crustaceans make their thin shells out of mostly organic matter, chitin (KITE-in), a complex carbohydrate that they manufacture from the foods they eat. 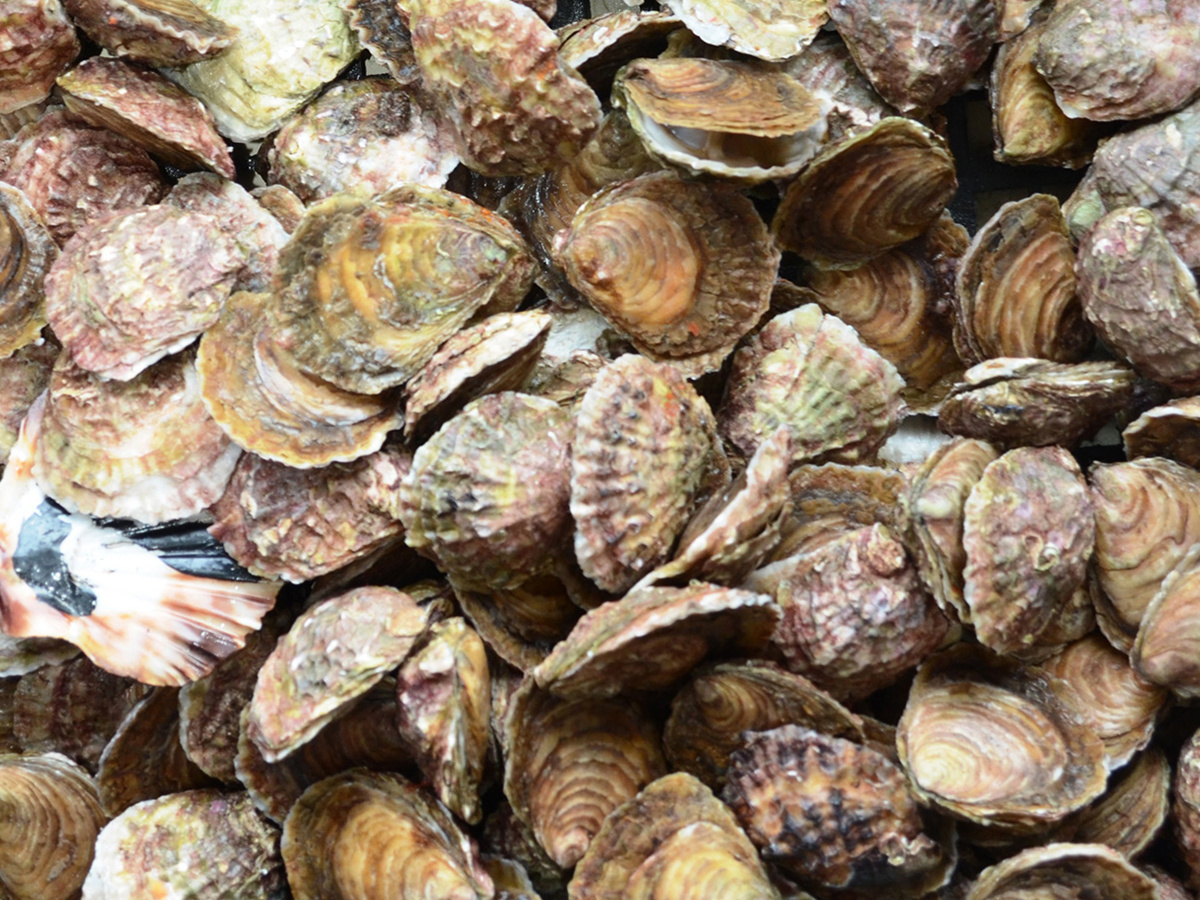 You won’t enjoy knowing this, but shrimps, crabs, and lobsters are closely related to insects and scorpions, which also make their outer crusts of chitin. (If that grosses you out, be aware that many biologists now prefer to believe that crustaceans and insects evolved independently. Biologists like seafood, too, you know.)

On the other hand, bivalve mollusks, clams, oysters, mussels, scallops, and other critters that live between pairs of hard shells, make their shells out of mostly inorganic minerals that they take out of the ocean, primarily calcium carbonate, the same versatile substance that limestone, marble, and eggshells are made of.

The next time you have a whole clam or mussel on your plate, notice the curved growth lines or ridges that are parallel to the outer edges.

These represent the successive additions of new shell material, deposited by the animal whenever it grew enough to need more room, usually during the warm seasons.

The two different kinds of shells in crustaceans and mollusks mean that the creatures have to devise two different strategies for growth. Mollusks, which grow by adding more material to the outer edges of their shells, in effect let out their pants, while crustaceans manufacture whole new suits.

When a crab or lobster gets too big for its breeches, it molts: It splits the seams of its shell, crawls out, and makes a new one in a larger size. If we catch one just after the act of disrobing, we may be treated to the Epicurean delight of a soft-shell crab or lobster. The “soft shells” are the new shells in the earliest stages of construction.

The Atlantic blue crab, for example, needs twenty-four to seventy-two hours to complete this construction job, which gives salivating predators like us just enough time to catch them, which isn’t easy, because being shorn of their armor, they hide in the eel grass and have to be scraped out. But if we’re lucky, we can catch them out in the open just before they molt. Skilled watermen can tell at a glance when a crab is getting close to shedding its shell, and when such “peelers” are found, they’re kept in a special pen until the deed is done.

And then what do we do with them? Why, we cook them as soon as possible and eat the whole things. Why spend time picking the meat out of a shell when we can find crabs without shells? All we have to do is three little cleanup steps, which are best done while the crabs are still alive.

Okay, if you’re squeamish get your fishmonger to do it for you. But here’s what needs to be done.

(1) Tear off and discard the abdominal apron (see below). (2) Cut off and discard the eyes and mouth parts, which are on the long side between the two big claws. (3) Lift up the pointed tips to find and remove the feathery gills or, as exuberant folklorists like to call them, the devil’s fingers. They call them that because gills are effective filters for any toxic impurities that might be in the water, and eating them can be risky. Besides, they don’t taste very good. And what about “all that yellow-green stuff” inside the crabs? Don’t ask. Just eat it. It’s delicious.

Male blue crabs are generally bigger than females, and are used mostly for steamin’ and pickin’, while the females are used more for canning. How do you tell a male crab from a female, you ask?

Look at the underside, and you’ll see an “apron,” a thin flap of shell that covers most of the abdomen. If the apron is shaped exactly like the Capitol dome in Washington, D.C. (honest!), it’s a mature female, or sook. If the apron is shaped like the Eiffel Tower in Paris, it’s a male, or jimmie. But if it’s a young, immature female, the apron looks like a Capitol dome with a bit of Eiffel Tower at the top. During the last molting before maturity, she discards the tower part.

Oh, and have you ever wondered why those drab, blackish green crab and lobster shells turn red when cooked? The red color, a chemical called astaxanthin, is present but not visible in the uncooked shells because it is tied up (Techspeak: complexed) with certain proteins to form blue and yellow compounds that together look green.