People of the Inca Empire in the Andes mountains have been using llamas for at least 5,000 years, probably making them the first large domesticated pack animal, or beast of burden. 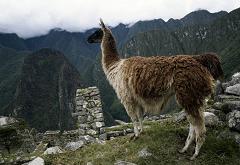 The llama were of symbolical significance to Inca royalty and llama figures were often buried with the dead.

Even the Inca deity Urcuchillay was depicted in the form of a multicolored llama.

Pre-Inca cultures such as the Moche people used to place llamas and llama parts in the burials of important people, as offerings for the afterlife.

During the Spanish conquest, llamas were used to bring down ore from the mines in the mountains.

Other domesticated animals such as sheep, pigs, and dogs preceded the llama, but they weren’t used to haul stuff like the llama was.