What types of Diseases, Germs, and Bacteria do Cockroaches Carry and Spread?

There are dozens of different species of cockroach, and the one probably most familiar in restaurants is the German cockroach.

Many people believe that cockroach infestation is one of the burdens of living in a crowded city, but in fact the insects can and do live in the wide open spaces of rural areas just as happily. Maybe a cockroach is just more noticeable when it marches across your menu.

Cockroaches are actually pretty clean, at least by their own standards. Their bodies are covered with sensory bristles that must be kept scrubbed and neat in order to function properly, so cockroaches expend a lot of effort in grooming themselves and are actually quite scrupulous about their own hygiene. 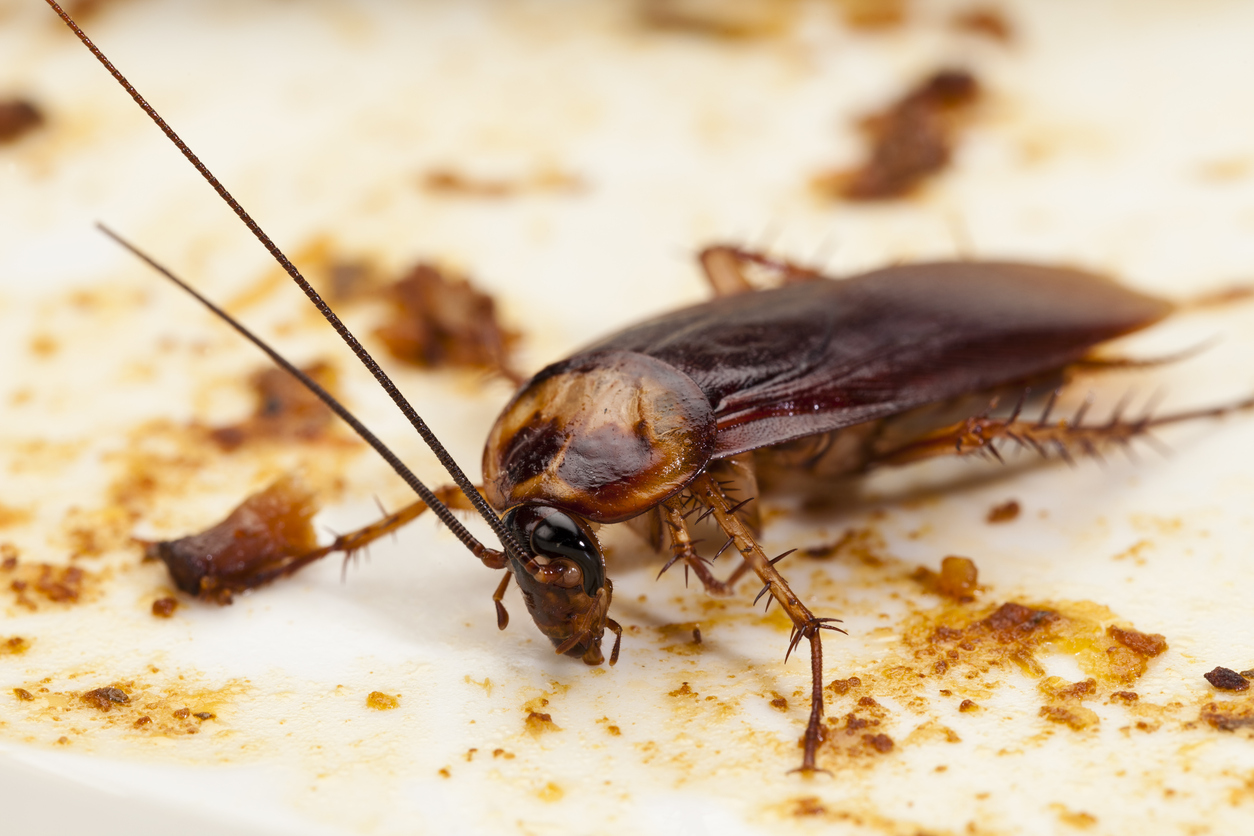 Unfortunately, they’re not so scrupulous about yours.

They’ll eat almost anything, rotting vegetable matter, houseplants, vegetables, meat, a crumb of bread, a dead mouse, and they leave droppings all over the food, which they then step in and transfer to the next pile of food they attack. The stuff in their droppings is really gross: all sorts of pathogens that can cause diarrhea, dysentery, typhoid, lung ailments, urinary tract infections, and other illnesses.

One study found that the German cockroach, America’s favorite, carries a great variety of bacteria, and a little more than half of the kinds they carry are disease-causing. Among the most common pathogens found on or in roaches were Klebsiella oxytoca, Klebsiella pneumoniae, and Enterobacter cloacae.

These are gram-negative bacteria of the family that includes Salmonella (famous in food poisoning cases), Shigella (the main cause of human dysentery), and Yersinia (one species of which causes the plague). Klebsiella can cause infections in the lungs and the urinary tract that can be fatal under certain circumstances, and it is resistant to many antibiotics. Enterobacter, which is almost exclusively a nosocomial infection (that is, transmitted in hospitals), also causes disease in various parts of the body. Cockroaches carry the bacteria on their exterior cuticle, contact with which alone is enough to spread them, and in their guts. Their feces are full of them.

Allergy to cockroaches is a risk factor for asthma. Asthma is a serious health problem, more than 5 percent of the U.S. population has asthma, and the number is growing. Of course, cockroaches are only one of many risk factors for asthma sufferers in the indoor environment, household dust mites, fungi, pollen, mice, rats, and dander from pet birds, cats, and dogs also contribute. Still, there is no doubt that cockroaches are in general not good for asthma sufferers.

That’s the bad news. The good news is that despite their ubiquity, their unsanitary toilet habits, and their ability to carry and transmit all sorts of pathogenic microbes, cockroaches have never been implicated in any major disease outbreaks in the United States.

They’re ugly. They’re disgusting. They’re a threat to proper digestion, because just thinking about them can turn your stomach. They certainly carry disease-causing microbes, and most people would rather not see them in a restaurant (or anywhere else, for that matter).

But a serious health threat? Maybe in some circumstances, but apart from their association with asthma, probably not much of one.