What was the Biggest Prehistoric Land Mammal in the World?

Imagine a beast taller than a giraffe and heavier than two elephants. Paraceratherium was the dinosaur of its day. It filled the same ecological niche as the huge sauropod dinosaurs, like Diplodocus, that lived 120 million years earlier, roaming through lightly forested plains and eating the leaves of trees, which it stripped off the branches with its front teeth.

Unlike the dinosaurs, Paraceratherium didn’t have a long tail to counterbalance the weight of its neck and head. Instead, it had much more powerful neck muscles, anchored to tall extensions at the top of its spine. This brought its center of gravity much farther forward, onto the front legs, resulting in a much stockier shape overall.

Paraceratherium lived during the Oligocene epoch, around 30 million years ago. The climate cooled suddenly during this period; Antarctica developed its ice cap for the first time and the Alps began to push upwards to form mountains. As the climate changed, the dense tropical forests were replaced with more open landscapes containing a mixture of trees and grass. These made it harder for medium-sized animals to hide from predators, so natural selection favored ever-larger individuals able to fend off attacks. 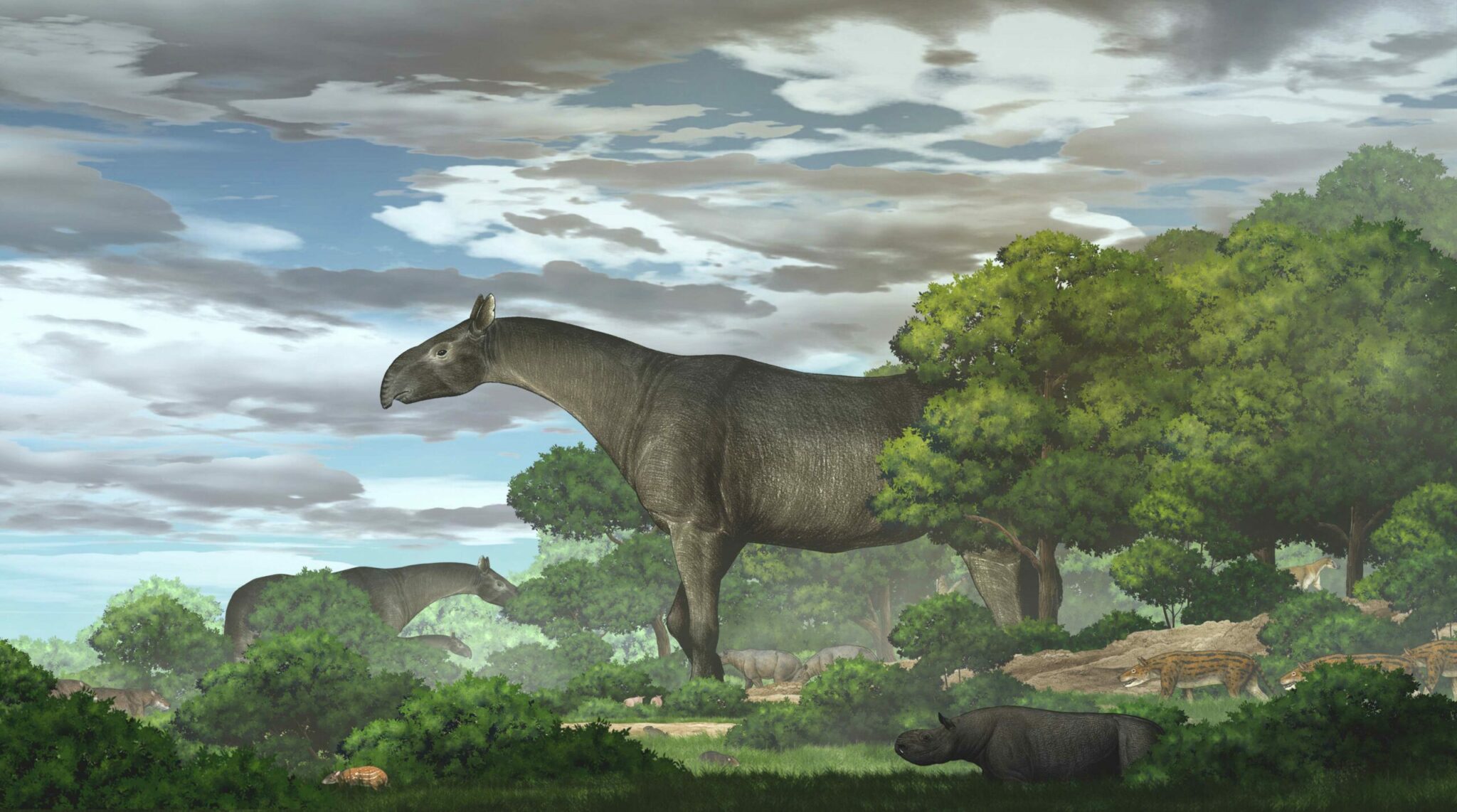 Along with competition between males for breeding rights, this drove the evolution of heavier grazing animals. The culmination of this was the Paraceratherium, which weighed a whopping 20 tons.

The largest predators at the time were a kind of marsupial hyena, no more than two meters (6.6 feet) long. An adult Paraceratherium was far too large to be troubled by these animals. Instead, they may have been eventually driven extinct by the rise of early elephant species. These would have knocked down the trees Paraceratherium relied on for food. As the grasslands expanded, Paraceratherium was replaced by smaller grazing mammals.

The first Paraceratherium fossil bones were found in 1911 by the palaeontologist Clive Forster Cooper. Two years later, he found more bones he took to be from a related genus and named the animal Baluchitherium because the fossils were found in Baluchistan, in what is now Pakistan.

In 1915, Aleksei Borissiak found a third set of bones and named the animal Indricotherium, after the Indrik, a monster from Russian folklore. None of these fossil finds were anything like a full skeleton, and it can be very hard to decide whether you have found a completely new animal or just a larger example of an existing one based on a single neck vertebra.

The scientific consensus is now that all three sets of fossils belong to the same genus, which is called Paraceratherium, because this was the first one to be described scientifically. To date, five species of Paraceratherium have been identified.