Hannibal, born in 247 B.C., grew up in Carthage during the First Punic War between the great powers of Rome and Carthage, rivals since the days long before when Dido of Libya had died of love for Rome’s Aeneas.

At the tender age of nine, Hannibal vowed a sacred oath before his father, the renowned general Hamilcar, to hate Rome forever, and he fueled this hatred throughout his life, developing a passion for war as he abstained from wine and women.

The Second Punic War was launched when Hannibal, as general of Carthaginian troops in Spain, seized the Roman allied town of Saguntum in a bloody massacre and brazenly undertook a march across the Alps to meet the Romans on Italian soil. 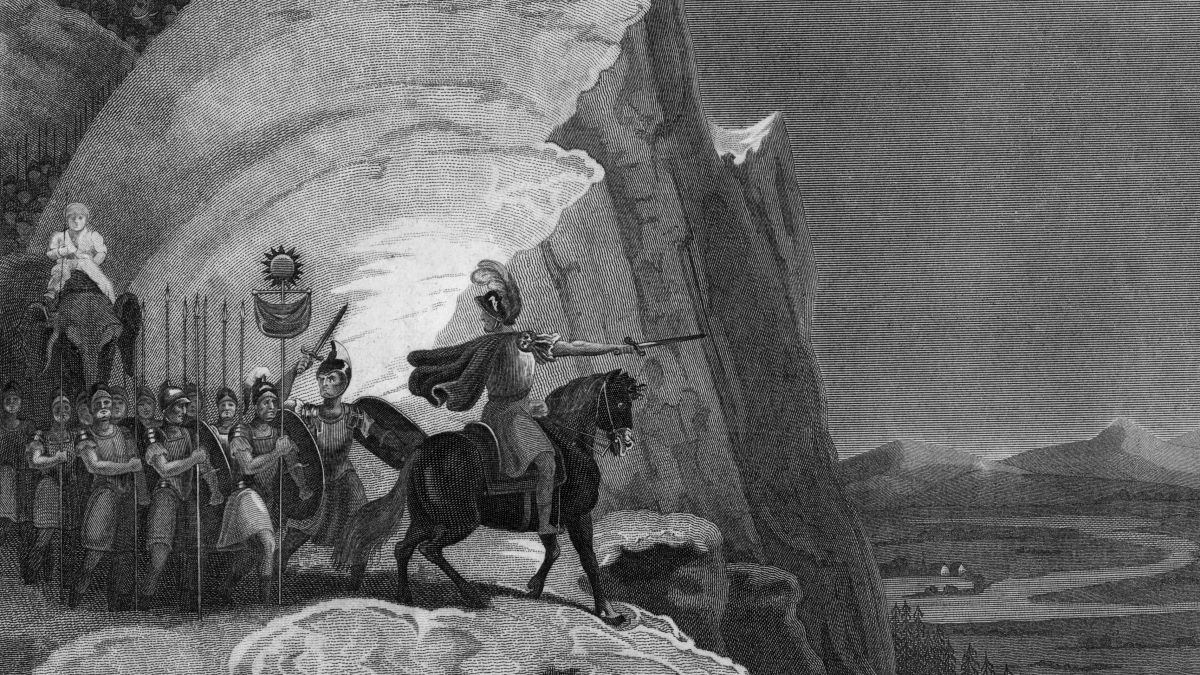 Hannibal’s crossing these snowy peaks with pack animals and thousands of troops is a feat that has amazed succeeding generations for centuries, an undertaking that attested to the general’s staunch will and ingenuity. Hannibal was greatly admired for his daring and readiness to forgo comforts, and Livy described him as an inspiration to his men. Throughout the march he encouraged and reassured his troops, a scurrilous assortment of mercenaries, who certainly did not remain with him out of patriotic sentiment. Hannibal’s steadfast leadership through barbarian attacks and perilous mountain passes was a key ingredient in his success.

Neither Hannibal nor any other African recorded his arduous trek. We rely on two Roman sources, Polybius and Livy, whose writings provide the basis for the following account. Further credit is due Sir Gavin de Beer, who spent 40 years of scholarly research tracing Hannibal’s footsteps.

Hannibal left Cartagena on the southern coast of Spain in May of 218 B. C. , with 90,000 foot soldiers, 12,000 horsemen, and many elephants. A battle with stubborn tribes in Catalonia reduced his numbers somewhat, and he was forced to leave 10,000 men and 1,000 horses to control the passes over the western Pyrenees, between Spain and Gaul. Three thousand more soldiers deserted him at the foot of the Pyrenees when the alarming extent of his ambitions became known.

The general thereupon got rid of 7,000 more, considered unreliable, and proceeded over the eastern Pyrenees, perhaps via the 360-meter-high Col de Banyuls, with 50,000 infantry, 9,000 cavalry, and 37 elephants. Nearly all these elephants were of the African type, smaller than the Indian elephant and more agile in negotiating steep mountains and rocky terrain. Elephants had been highly prized in war for over a century, but Hannibal not only intended to use them against cavalries whose horses had not been trained to meet them, he knew the novelty and size of the elephants would terrify ill-willed tribes along the way.

The army marched through southern Gaul somewhere near the coast, traversing marshes and lagoons, until it reached the Rhone River, then headed north for four days to Fourques, where the river is somewhat calmer and shallower.

The physical problem of getting bag and baggage as well as elephants across the river was exacerbated by the hostile Volcae, a Gallic tribe crowding on the eastern bank, just waiting to pick off the Carthaginians when they were most vulnerable, in midstream. But the crafty Hannibal sent a unit of Spaniards 22 miles upstream. Using rafts made from tree trunks or merely the aid of their shields, the men floated and swam across.

Once on the western shore they headed south, coming up on the Volcae from behind. When Hannibal received a smoke signal from his confederates at dawn, he began to cross the ford, while the dumbfounded Volcae were easily routed from behind. Hannibal’s men, meanwhile, had bribed the tribes on the west bank for the use of some boats, and had built rafts and hollowed out tree trunks as well.

To get the elephants across, they constructed piers that jutted 200 feet into the river and were secured by ropes tied to trees upstream. Large rafts with floats were than attached to the piers and covered with earth to fool the elephants, which wouldn’t take to the idea of leaving dry land. The females were led on first, and the males happily followed. But then some of the elephants panicked, stampeded, and plunged into the water. Fortunately the river was just shallow enough so that, with their trunks high over their heads, the elephants managed to wade to shore. Horses swam across, led behind rafts, and the men floated or swam.

Before heading east Hannibal marched farther upriver to “the Island,” a fertile triangle of land bordered by the Rhone and Aygues rivers and the Baronnies Mountains. There Hannibal diplomatically settled a kingship dispute between two brothers. The one who thereby came to power gratefully supplied Hannibal with wheat and clothing and provided an escort to fend off the hostile Allobroges tribe, which occupied vast territories to the north.

This escort accompanied Hannibal north, then east along the Drome River to the ascent to the Alps and the Col de Grimone. On their departure, Hannibal became aware that the Allobroges were nearby (this prior knowledge probably saved him from being defeated altogether) and sent several Gauls to discover the barbarians’ intentions.

The spies learned that the Allobroges guarded the mountain pass by day, but retired to their town at night. Hannibal thereupon moved his camp openly to a point dangerously near the Allobroges and proceeded at night with a group of his best men through the gorge, occupying the exact position held by the barbarians by day. The Allobroges were stunned and might have drawn back had they not then seen the remainder of the army slowly plodding through the gorge, ripe for the taking. They attacked from above, wreaking havoc, causing many to fall from the narrow path along the cliffs. Hannibal rushed back and managed, after heavy losses, to beat off the powerful tribe.

The battered army marched peacefully through the wide Bassin de Gap to the Durance River, where it crossed over and followed a watershed pass leading out of the valley, probably along the Guil River through the Queyras and over the Col de Traversette. But a second battle with barbarians hampered its progress.

On the seventh day since his ascent into the Alps, Hannibal was greeted by tribes bearing olive branches and wreaths. Suspicious, Hannibal pretended to befriend them and received hostages who acted as guides and led the unwieldy army through an extremely narrow pass, soaring cliffs to one side, a sheer drop on the other. As Hannibal’s men and animals navigated the treacherous path, the alpine tribes sneaked up from behind. The general, anticipating as much, had placed heavy infantry in the rear, which fought them off. The situation became desperate when the marauding tribes hurled down boulders from above, causing thousands to fall to their death and splitting Hannibal’s column in two. Suffering heavy losses, the weary troops were forced to continue through the gorge all night.

Hannibal marched over the main watershed pass, towering some 9,680 feet high, and camped in the snowy peaks for two days. There he tried to rally his dismayed army with a view of Italy’s Po Plain stretching in the distance far below. Barbarians no longer threatened them but the precipitous and slippery descent proved just as fatal.

Many lost their balance and perished; scores of animals whose legs penetrated the new soft snow got stuck in the hard, frozen snow underlying it. A famous detail from Livy describes the removal of a gigantic boulder that stood in the way. The men cut trees and covered the rock with logs, to which they set fire. Then they poured vinegar (sour wine) over the rock, which made it more likely to crumble, and attacked it with pickaxes. The sight must have been a dramatic one, the massive rock burning in the remote, icy peaks as men and animals huddled in the cold.

When, after 15 days in the Alps, Hannibal reached the plains below, he had 12,000 African infantry, 8,000 Spaniards, 6,000 cavalry, and all 37 elephants. The hardy survivors had covered 1,500 kilometers from Cartagena in five months, only to rest three days and then undertake a futile war with a country capable of massing three quarters of a million troops against them.