The largest man-made construction on earth, and, it is often said, the only one visible from the moon, the Great Wall of China began as many different walls linking already existing fortifications and watchtowers.

During the period of the Warring Kingdoms (c. 500-221 B.C.), myriad principalities were subsumed under huge kingdoms, which inevitably fought and erected protective walls between each other. Walls surrounded the towns and may have been extended along with a king’s conquests. To the north they increasingly became a demarcation between a settled agricultural society and a more mobile, nomadic one.

In 221 B.C. the immensely powerful ruler of the Qin kingdom conquered the last opposing state and united China for the first time. Qin Shi huangdi, “the First Emperor,” instituted a centralized, authoritarian government, the likes of which China had never before seen. He standardized China’s written language, currency, and weights and measures. He destroyed the fortifications of the other kingdoms, melted down their weapons, and built roads 50 paces wide along which he and his magnificent entourage could parade. 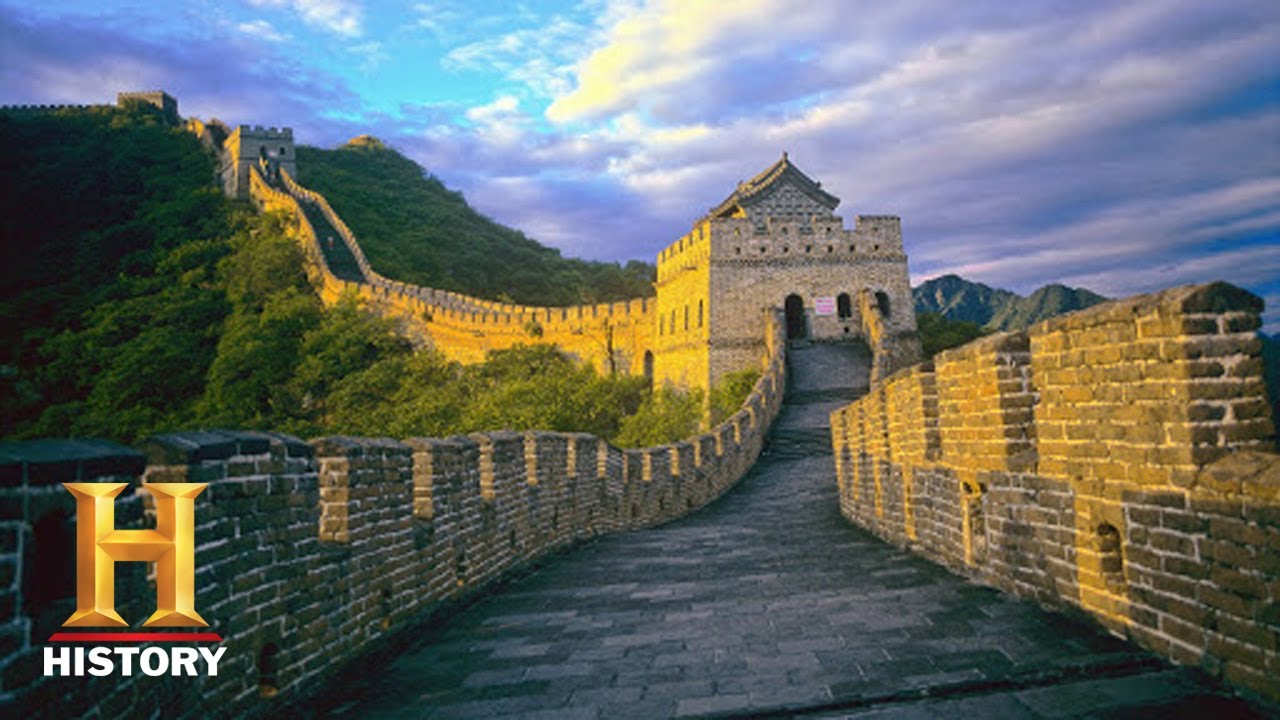 China was divided into 36 administrative zones, and all travel, was monitored by police. The new strength and unity did not come without sacrifice, however. Any criticism of the state and all philosophical discussion were silenced, and the Emperor burned all but the most utilitiarian writings or locked them away in the imperial library. He sent 460 scholars to their deaths.

Having established internal order, the Emperor turned his attention to the external borders where barbarians and nomads were a constant threat. He dispatched the already renowned general Meng Tian in command of 300,000 men to ward off the barbarians in the north.

After repelling the Xiongnu (Huns), Meng Tian stayed on the frontier and oversaw the construction of the Great Wall along the Yellow River. His troops were joined by the Emperor’s ample supply of convicts, as well as 500,000 peasants. When a conspiracy later arose against Meng Tian and he was condemned to die, he allegedly confessed, “Yes, I did commit a crime, and I must die for it. From Lintao all the way to the east of the Liao River, ramparts and moats stretch for more than 10,000 li. Surely in that expanse of land I must have severed a vein of earth. That is my crime.” Although the modern observer might look instead to the human lives that were severed, this is a noteworthy instance of belief in the quasi-divinity of the earth, a belief that would gain significance in China in later years.

The principal materials used in this early construction were earth, stone, timber, and tile. Local sources were tapped, and so the composition of the wall shifted with the topography. On mountains stones were quarried, while on the desert the wall grew out of sand and pebbles, tamarisk twigs and reeds. Earthen walls were made by first affixing posts and boards along both sides and then ramming in. layer upon layer of yellow earth with wooden hammers. Workers carried heavy loads on their backs or with carrying poles. Sometimes they passed materials from one person to the next along a long line from the source to the building site.

The succeeding Han dynasty (206 B.C.-A.D. 220) led a period of expansion north, south, east, and particularly west, where they opened a new trade route. The wall was extended along this Area of commercial conquest, but later dynasties were unable to maintain it.

Records indicate that, over the centuries that followed, the Great Wall remained a major concern of the emperors, who intermittently drew up huge labor forces to add to and repair it. For example, in A.D. 446, more than 300,000 laborers were press-ganged to construct the stretch of the wall south of present-day Datong. The Emperor Tian Bao recruited 1.8 million peasants in 555, while Da Ye organized over 1 million workers in 607 and another 200,000 in 608. Only with the advent of the Tang dynasty in 618 and a period of great stability did work cease. The Tangs, in fact, scorned the tradition of wall building, endorsing instead more aggressive, offensive attacks to protect China’s borders.

In the wake of Mongolian occupation, however, the Ming dynasty (1368-1644) wholeheartedly resumed the age-old tradition. This was a period of massive building. Hundreds of watchtowers were erected and stronger, larger walls rose to replace or add to the old ones. By this time, roughly 1,500 years after Meng Tian’s time, the Chinese had bricks, which became a principal building material, and lime. Kilns fueled by timber cut locally or carried from afar were often made on the spot to produce bricks and tiles. If brought from nearby counties, the bricks were toted in baskets on the backs of donkeys or tied to the horns of nimble goats. Materials were also transported in wheelbarrows, a Chinese invention dating back to the 1st century.

Legend has it that a dragon marked out the tortuous path of the wall and the workers traced his footsteps over mountains and valleys. Another story tells that the builders initially worked out the design and construction process so precisely that when work was completed, they had only one brick left over. It remains to this day on one of the watchtowers.

Massive organization and close supervision were indeed integral to the building of so huge and stolid a wall. In the Ming dynasty, commanding generals in nine towns oversaw the construction. Planners tried always to use the land to its best strategic advantage, placing fortresses in mountain passes, for instance, or in the sharp twist of a river. The wall accentuated natural barriers, such as mountain ridges; beacon towers were placed prominently and within a certain designated distance from one another. When building began, workers first had to level the land and then lay a bedrock of parallel stone slabs. They erected inner and outer walls of stone slabs, then crammed the interior with stones, cobbles, lime, and earth, and laid bricks along the top.

The result of this Herculean effort was a wall so massive that the materials that comprise it could circle the equator, even if stacked six feet high. Standing 8.5 meters high and 5.7 meters across, the wall can accommodate five horses or ten people walking abreast. It incorporates thousands of watchtowers, military stations, garrisons, and gateways. The two-story towers harbored grain and arms below, while upstairs soldiers watched for enemies. From beacon towers on the wall and nearby mountains, soldiers at nearly any distant spot could send messages rapidly to the capital, using smoke signals during the day, fire by night. A million-troop force reportedly manned the wall during the Ming dynasty.

However awesome the Great Wall appears to the western eye today, it is for many Chinese a graphic symbol of hardship and suppression. Many legends tell of the sorrows that the people bore. Meng Jiangnu was among the thousands of wives left alone when the men were called to labor.

After years of separation from her beloved husband, she set out to find him, trudging mile after mile beside the Great Wall. According to the story, she at last arrived at Shanhaiguan Pass, only to learn that her husband was dead. She cried so many tears that a section of the wall crumbled, revealing the remains of her husband buried beneath. In despair, she drowned herself in the sea. A commemorative tablet at once arose from the waves, and today a temple in her memory stands at Shanhaiguan.

In the west, the monumental wall begins at Jiayuguan Pass (the Jade Gate) beneath the snow-peaked Qilian Mountains in Gansu province. For traders venturing westward, the pass marked the last outpost of civilization and security. From there the wall runs eastward, skirting the Gobi Desert, snaking along the Yellow River for over 1,000 miles, spanning grasslands and plateaus, and cresting the ridges of the Yanshan Mountains, a total of 3,720 miles to Shanhaiguan, the First Pass on Earth. The last stretch, from Bejing to the Gulf of Chihli on the Yellow Sea, is the best preserved and most frequently visited.

The idea that the Great Wall is visible from ‘the moon has been circulating for some 60 years, cropping up in both guidebooks and scholarly works. But Arthur N. Waldron of Princeton University’s East Asian Studies Department disagrees. In a letter to the editor of The New York Times on March 20, 1983, Waldron debunked the sensational claim, asserting that it simply is not true: “No communication with manned spacecraft makes mention of the Wall, and in any case, a few calculations demonstrate the idea’s absurdity.

According to Dr. Alta Walker of the U.S. Geographical Survey, seeing the Wall from the Moon is like seeing a popsickle stick from 384 kilometers.”