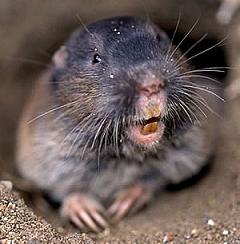 Unlike ground squirrels, pocket gophers are the “true” gophers,

Gophers are burrowers and create a large networks of subterranean tunnels called gopher towns which can be extremely destructive to commercial agriculture.

Most species of gophers love to feed on shrubs and vegetables and are considered agricultural pests.

Gophers don’t see well underground, but luckily, they don’t have to.

They can run backward almost as fast as forward, and their hairless tail is very sensitive to touch, so they back through tunnels, feeling the way with their tails.

Gophers are also hoarders, and their characteristic large cheek pouches are used for transporting food back to their burrows.