Where does Bacterial Meningitis come from and Why doesn’t everyone get vaccinated?

Alliance, Ohio, is a town of about 25,000 people southeast of Akron.

It is famous, if we use the word loosely, as the site of a yearly carnation festival every August and the home of the particular variety of carnation that President William McKinley favored as a lapel decoration. But one day in June 2001, the town became famous for something else entirely: bacterial meningitis.

Three high school students came down with the disease and two of them died, frightening the entire town, and with good reason. Bacterial meningitis has a fatality rate of 10 to 15 percent, and certain forms are contagious. This was definitely an outbreak, not coincidental individual cases, the CDC performed a polymerase chain reaction test on the Neisseria meningitidis type C they found in the three kids, and the bacteria were genetically identical. Neisseria meningitis is one of the contagious forms. 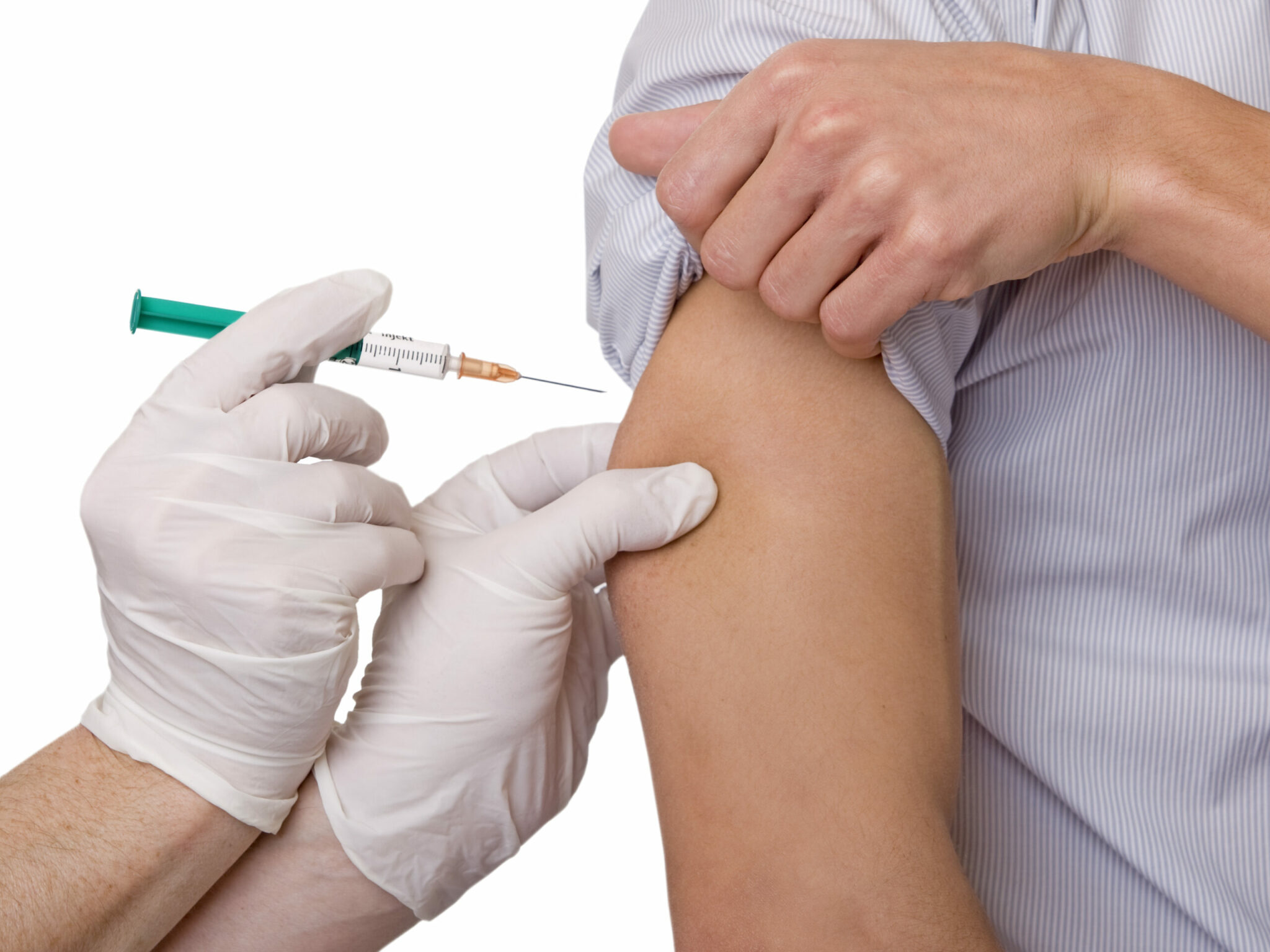 Meningitis means a swelling of the meninges, the membranes that cover the brain and spinal cord. The term itself says nothing about what causes the illness. When we call an illness “bacterial meningitis” we are saying what the cause is, but only very vaguely, it’s caused by bacteria.

It is indubitably true that a person with bacterial meningitis is infected with bacteria, but what germs these are and why they are making him sick is another question entirely. Many species of bacteria can cause meningitis, although three of them account for about 80 percent of all cases: N. meningitidis (meningococcus), H. influenzae type b (Hib), and S. pneumoniae (pneumococcus).

Meningococcus can be found in the nose and throat of about 5 percent of the population, and it is easily spread by respiratory droplets and close contact with an infected person. But very few people actually get sick from the germ, and no one knows why. Meningococcus most often causes meningitis in children under one year old.

It can also occur in military barracks, college dormitories, and other such closed populations. Hib also causes meningitis, but mostly in children who are not vaccinated against it, and not in adults unless they have some predisposing factor, such as being immunocompromised or having had a head injury. Among adults, the most common cause of meningitis is pneumococcus. Children under a year old are the most common victims of the disease, and the cause can be not only Hib and meningococcus, but also E. coli or streptococcus.

Acute bacterial meningitis usually begins with a sore throat and a fever, headache and stiff joints, and then vomiting. Most people get better with antibiotic treatment, but a small number become irritable, confused, and drowsy, fall into a coma, and die. And all this can happen within 24 hours in adults, and even faster in children.

In infants, the symptoms are less predictable, but often include swelling of the fontanel (the “soft spot” on an infant’s skull), fever, vomiting, and a high-pitched cry. This makes early diagnosis essential, and any unexplained fever in a young child is cause for a lumbar puncture to examine the spinal fluid if the infant is increasingly irritable or has vomiting, lethargy, or seizures.

Most kids get their first Hib vaccine at two months. This has made the disease very rare in the United States, and has virtually eliminated it as a cause of meningitis in kids over that age. It still causes considerable trouble, however, for infants under two months old. Most of the meningitis in older children and young adults in the United States is now caused by N. meningitidis.

The best treatment depends on the age and health status of the patient and on what organism is causing the illness, but the first-line treatment for adults when the exact organism is unknown is a combination of antibiotics including penicillin or ampicillin along with cefotaxime, ceftriaxone, or vancomycin.

Sometimes meningitis appears in sporadic cases here and there; other times there is an outbreak of illness, as there was in Ohio. These outbreaks used to be rare, but since 1991 their frequency has increased. Between July 1994 and July 1997, there were 42 outbreaks of meningococcal disease, including four at colleges. Still, outbreaks account for a small minority of cases, less than 3 percent. You’re more likely to get the illness alone than in company with others. The outbreaks that do occur typically happen where large numbers of young adults live in crowded conditions.

Military recruits are now routinely vaccinated against meningococcal disease (as are students entering the military academies), so rates there are quite low, and the outbreaks that used to occur before the use of the vaccine have stopped. College dorms, though, are another story. From September 1998 through August 1999, there were 90 cases of meningococcal disease in college students reported to the CDC, about 3 percent of the 3,000 cases reported every year. All but three of these cases were undergraduates, and 40 of the 90, or 44 percent, were freshmen. To put things in perspective, there are 2.7 million freshmen who enter college every year, so this is not a common illness. But it can be a deadly one. Five of these 90 students died.

So why don’t all students going to college just get the vaccination? Vaccinating 2.7 million kids on their way to college might be a little tricky to arrange, so let’s narrow it down to the group most at risk, college freshmen who live in dormitories. That’s about 591,000 kids.

Now let’s consider what would be accomplished by vaccinating this group, or as much of this group as we get to come in and get the shot. There is no doubt that vaccinating all these freshmen would prevent cases of meningococcal infection and deaths from that illness. But meningococcal meningitis isn’t that common an illness, so you’re not going to prevent many cases, you’ll prevent between 15 and 30 cases per year in this group and 1 to 3 deaths.

If you decide you’re going to vaccinate all freshmen and manage to get the vaccine to 2.3 million of them, you would prevent 37 to 69 cases at a cost of $1.4 million to $2.9 million per case, and two to four deaths for something between $22 million and $48 million each. If you or someone you know are one of the deaths prevented, of course, you’ll have a certain view of the economics. But the people who decide which public health measures should be undertaken aren’t considering just you, they have to consider all of us, including people who get sick from all other diseases and those who don’t get sick at all.

From their perspective, spending $48 million to prevent one death from meningococcal meningitis is not a good use of public health funds. These calculations may seem rather coldhearted, but without considering such numbers no public health program can be rationally undertaken or have any hope of success.

Yet the vaccine is available, safe, and effective, so the Advisory Committee on Immunization Practices (ACIP) makes these recommendations: Freshmen and their parents should be informed about meningococcal disease and of the availability of a vaccine, and should get it if they ask for it. Other students should be similarly informed, and the vaccine should be available to those who want it. The ACIP does not recommend any changes in living situations for freshmen students because the slight increased risk for these students does not warrant it. Still, it’s important for students to seek medical attention for unexplained fever, headache, or neck pain.

In Alliance, Ohio (“Home of the Scarlet Carnation”), state and federal health officials did their calculations and decided to vaccinate only the 5,800 students and faculty members in six high schools in the region after it became clear that this was the population at highest risk. Needless to say, this did not reassure the 30,000 other people in the area, many of whom thought they’d like to be vaccinated, too, and damn the expense.

So health officials reminded everyone that they could get the vaccine, if they wanted it, with a doctor’s prescription. Of course, this meant that doctors in the area would have to write 30,000 prescriptions, and they’d have to find 30,000 doses of the vaccine. The only vaccine available is called Menomune, and it is manufactured by only one company, Aventis Pasteur. This was not a plan that would prove either easy to implement or universally satisfactory. The vaccine costs $65 per dose, and predictably, Aventis couldn’t produce it in sufficient quantities fast enough. The city had to create a waiting list.

If the CDC’s recommendations had been followed, probably only two high schools would have received the vaccine, the local officials decided to extend it to six schools, but this clearly wasn’t enough to make everyone happy.

Parents in the school districts bordering the ones that got the vaccinations were incensed, pointing out that their children had plenty of contact with kids from the vaccinated districts, some of them lived right across the street, said one mother. Why should my kid be on a waiting list and have to pay $65 while the kid across the street gets his vaccine free, with no waiting? It is not known whether anyone reminded this mother that if the kid across the street got the vaccine, then that kid wouldn’t get the disease and therefore couldn’t transmit it to her kid, nor is it known if this information would have consoled her.

That we have a vaccine for a disease is not a good enough reason for everyone to take it, as the example of meningococcal meningitis demonstrates. As for the mayor of Alliance, Ohio, he was just happy that no one else got sick, and that everything had returned to normal before the start of the big carnation festival in August.

In 1942, the first person in the United States to be treated with penicillin, Mrs. Ogden Miller, the 33-year-old wife of the Yale director of athletics, suffered from hemolytic streptococcus septicemia and was cured with about 40,000 units of penicillin, but that was when penicillin was very hard to produce and streptococcus would succumb to small doses. Treating such an infection today requires a dose of 1.2 million units.