Where Does Gelatin Come From and How is Gelatin Made?

Jell-O and similar desserts are about 87 percent sugar and 9 or 10 percent gelatin, plus flavoring and coloring.

Kids love three things about the stuff: It is brightly colored, it is very sweet, and it jiggles. Mothers don’t mind, because gelatin is pure protein. The gelatin, which of course is the jiggler, really does come from pig skins, cattle hides, and cattle bones. But stop squirming. Every time you’ve made soup or stock that jelled in the refrigerator, you’ve made gelatin out of chicken hides or beef bones.

The skin, bones, and connective tissue of vertebrate animals contain a fibrous protein called collagen. There is no collagen in hoofs, hair, or horns. When treated with hot acid (usually hydrochloric or sulfuric acid) or alkali (usually lime), collagen turns into gelatin, a somewhat different protein that dissolves in water. The gelatin is then extracted into hot water, boiled down, and purified. 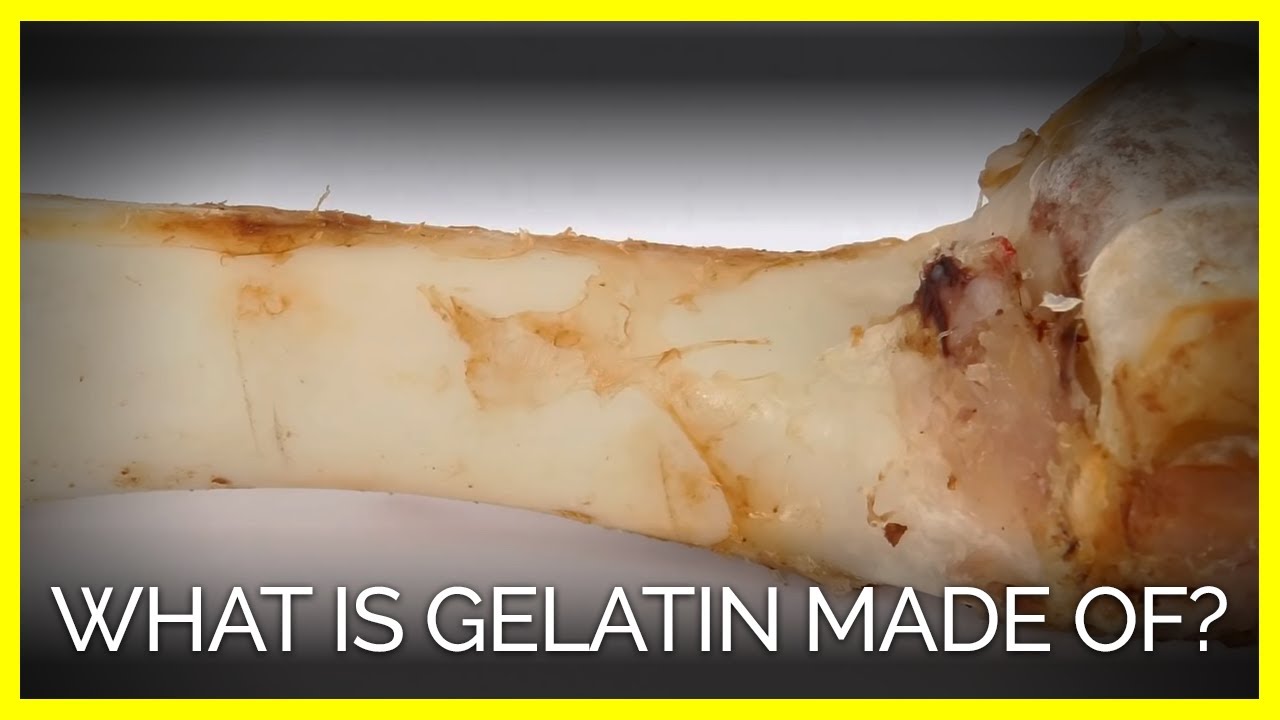 You wouldn’t want to see, or smell, the early stages of the purification process.

But by the time the gelatin leaves the factory, it has been thoroughly washed at various stages to get the acid or alkali out, then finally filtered, deionized (a way of removing chemical impurities), and sterilized. What eventually leaves the factory is a pale yellow, brittle, plastic-like solid in the form of ribbons, noodles, sheets, or powder. When this solid gelatin is soaked in cold water, it absorbs water and swells up; then, when the water is heated, it dissolves to form a thick liquid that jells on cooling.

As a protein, gelatin is obviously nutritious, although it isn’t what nutritionists call a complete protein. But what is most fun about it is that when dissolved in water it’s a gel (a jelly-like substance) when cold and a liquid when warm. It literally “melts in your mouth.” That’s the main characteristic that it gives to confections from marshmallows to Gummi Bears, whose gumminess comes from a high proportion, around 8 or 9 percent, of gelatin. And guess what holds those tiny white dots on the tops of nonpareil chocolate candies? Right, gelatin used as an adhesive.

Most of the gelatin made in the United States, more than a hundred million pounds a year, is slurped in the form of gelatin desserts.

You’ll also find it in soups, shakes, fruit drinks, canned hams, dairy products, frozen foods, and bakery fillings and icings. But food isn’t the only use for this unique substance. Those little two-piece capsules that contain many drugs are also made of gelatin, about 30 percent gelatin in 65 percent water. Match heads are a mixture of chemicals held together by a gelatin binder.

And then there is photography. The photographic emulsion-that thin, light sensitive coating on the film or paper, is made of dried gelatin containing the light sensitive chemicals. Nothing better than gelatin has ever been found since it was first used in photography in 1870. Isn’t it heartwarming to know that astronauts take pictures using a primitive substance made of animal skins and bones?