Where does S. aureus bacteria come from and How is S. aureus food poisoning prevented?

If some evil genius wanted to create a really virulent and versatile bacterium, he might model his creation on Staphylococcus aureus, a spherical gram-positive organism that grows in clusters that under a microscope look like bunches of grapes.

This is a germ that really has what it takes. It can grow in temperatures ranging from about 50°F up to 113°F both with and without oxygen, survive for several days at refrigerator temperatures, and live in a solution that is up to 13 percent salt. It has surface proteins that help it colonize host tissue, and it produces substances called invasins that help spread the bacteria after colonization.

Certain biochemical properties of the organism give it high resistance to the phagocytes in the blood that normally ingest and destroy foreign organisms. It releases a toxin called leukocidin that destroys granular leukocytes, one of the types of white blood cells that protects against infection. It produces two other types of toxins called enterotoxins, one of which causes diarrhea and vomiting and the other toxic shock syndrome. It also puts out a poison that causes blistering and loss of skin in newborn babies, apparently by targeting the specific protein that is involved in maintaining the integrity of the epidermis. 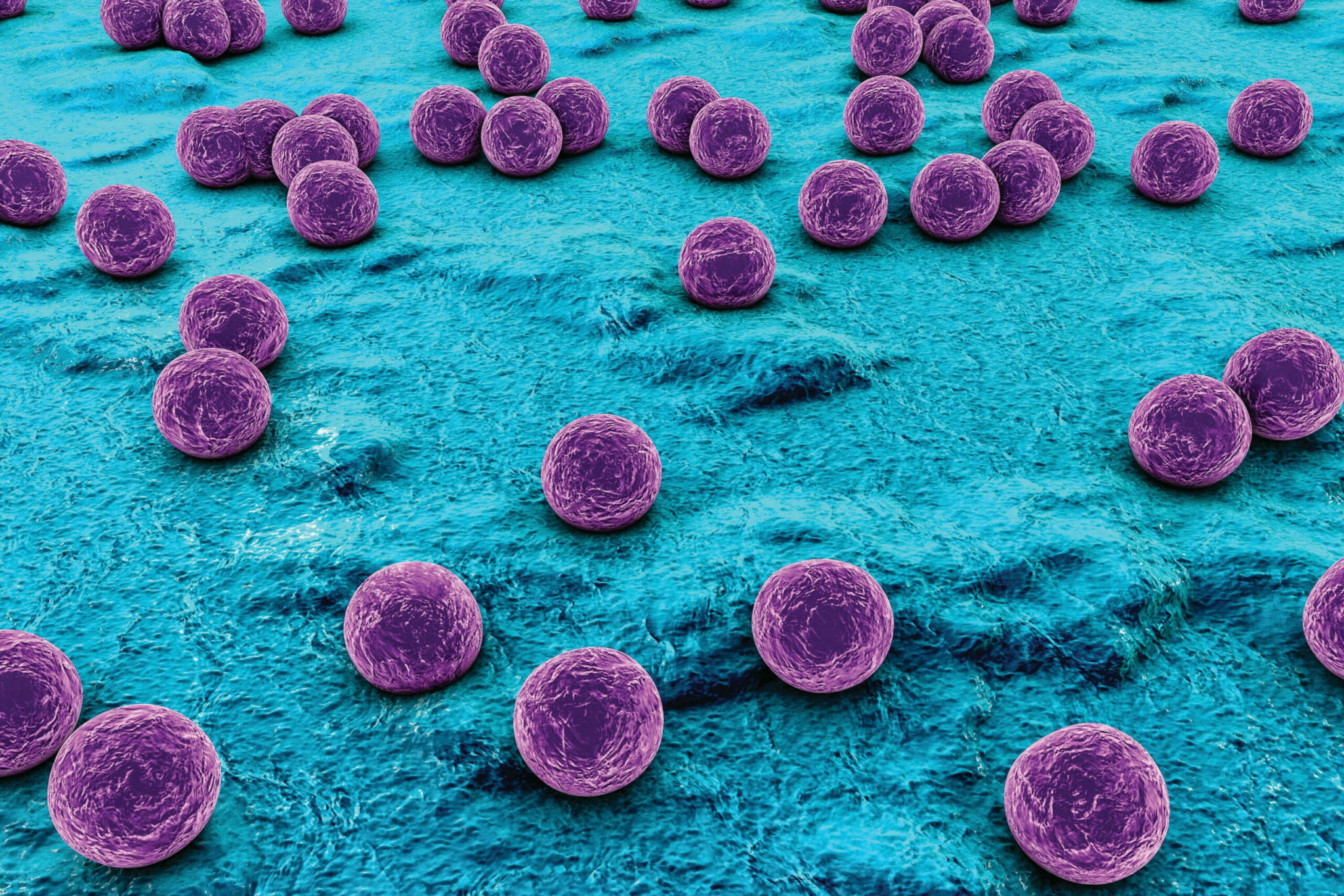 While the germ itself is killed by pasteurization, these toxins can still be potent even after they’ve been cooked at 250°F for up to half an hour. And to top it off, S. aureus is highly resistant to antibiotics, some recently discovered strains are even resistant to vancomycin, usually considered the antibiotic of last resort. It’s a big problem in hospitals, we’ll have more to say about that feature of Staphylococcus in another post.

With survival skills like that, you’d think S. aureus would be pretty common, and you would be right. In fact, you probably have some right now on your skin or in your nasal passages, throat, or hair. About 50 percent of people do. Animals have it, too.

You can live quite healthily with it, provided it doesn’t get into the wrong place in your body. It can enter the body through your nose, through wounds, or through IV drug needles. If it does, it can cause a remarkable variety of illnesses: sties in your eyes; boils, carbuncles, impetigo, and other rashes on your skin; endocarditis (an inflammation of the lining of the heart); pneumonia; toxic shock (the same as the toxic shock syndrome women can get from sanitary napkins) and bladder infections; and osteomyelitis (an infection of the long bones). It can also cause septicemia, a generalized blood infection that can be rapidly fatal.

And it causes food poisoning, too, with plenty of vomiting and diarrhea. In the United States, pork (particularly baked ham), fish, chicken, potato or meat salads, and cream-filled bakery products have been implicated. The germ itself, as we noted previously, is killed by pasteurization or by heating the food before you eat it, but the toxins the germ produces are not so easy to destroy.

This creates some complications for scientists in establishing that S. aureus is the actual cause of any given case of food poisoning. The presence of the organism itself isn’t enough, you have to actually establish that the germ you found is producing enterotoxins. Conversely, the lab might find only a few organisms that are the remains of a larger population that produced ample toxin to cause illness. And S. aureus isn’t the only species that can produce toxins: cases in which S. epidermidis, S. intermedius, and S. hyicus produce poison have been found as well.

Staph isn’t like other food poisoning agents, that is, it doesn’t actually invade the cells of the stomach and small intestine.

Instead, the enterotoxin it produces acts like a neurotoxin, causing symptoms by attacking the vagus nerve endings in the stomach. The toxin also affects the macrophages, the large cells found all over the body that clean the blood by ingesting damaged red blood cells and other tissue. It causes the macrophages to release interleukin-2, an immune response that leads to inflammation and further unpleasant symptoms.

Most food poisoning from staph occurs during the summer, with mayonnaise frequently the vehicle. You get sick pretty quickly after consuming food contaminated with staph, within two to six hours, nausea, vomiting, and stomach cramps start. Exactly what quantity of toxin you have to ingest to get these symptoms isn’t really known, and there are lucky people who ingest contaminated food without getting sick at all. S. aureus, like most germs, causes more severe illness in those who are immunocompromised or have some other disease.

An average of about 1,400 cases are reported to the CDC every year, and the number of actual cases is much larger. Death from food-borne S. aureus is very rare. The CDC reports only one death in the five years from 1993 to 1997.