Where does Sherry come from and How is Sherry made?

There are some five thousand varieties of wine grapes that could be used in almost one hundred appellations d’origine in France alone, plus seventy-four appellations in California, not to mention Australia, Chile, and dozens of other wine-producing countries.

Multiplied by perhaps ten years of vintages, that amounts to over 37 million possible bottles of decent wine, plus untold bottles of plonk. I often wonder how anyone can select the best wine to match a dinner course when faced with such a staggering range of choices lying in a make-believe cellar the size of Antartica.

But I do know something about Sherry, having visited the one place in the world where it is produced: in and around the town of Jerez de la Frontera, a couple of hours’ drive south of Seville in Spain’s province of Cadiz. There, I was figuratively and almost literally immersed in Sherry as I toured the headquarters of Williams & Humbert, producers of Dry Sack, Pando, Canasta Cream, and many other Sherries and brandies. 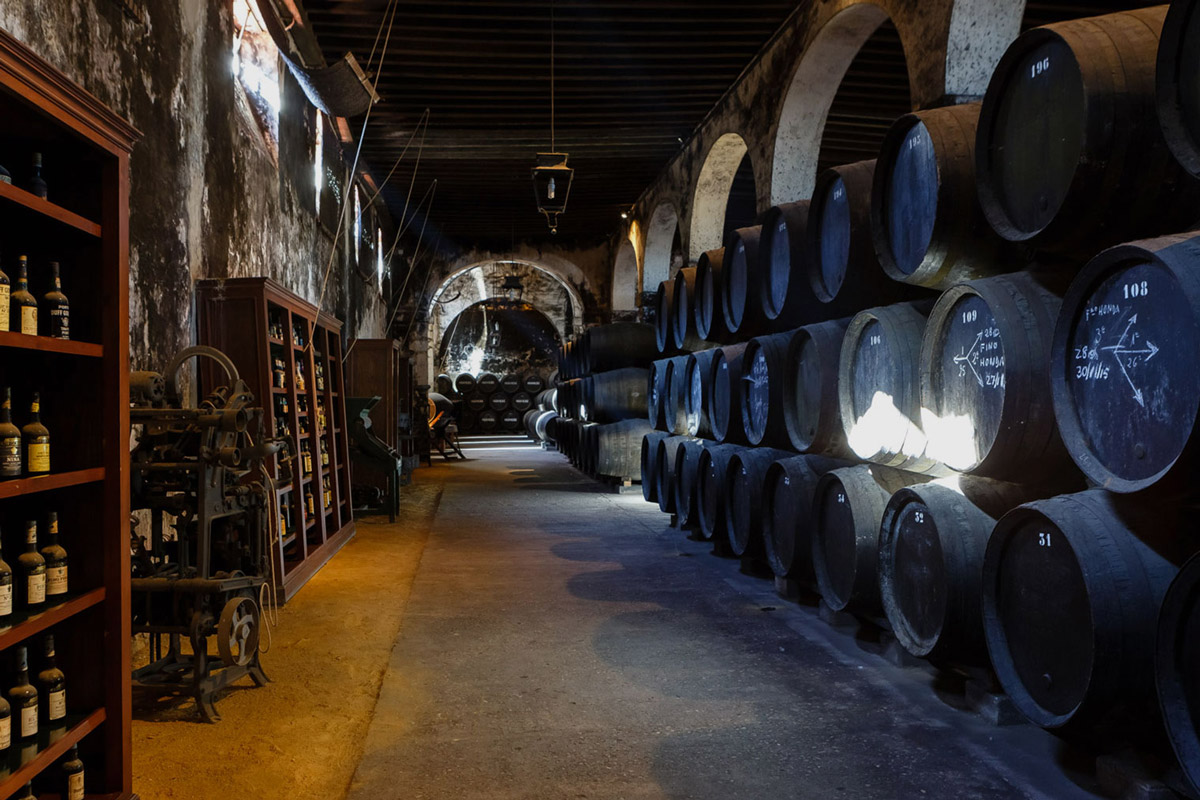 Why the non-Spanish names Williams and Humbert, you may ask? And whence the English word Sherry? Several of the Sherry companies in Jerez were founded in the nineteenth century by British entrepreneurs for the purpose of exporting Sherry to England, where the dry Sherries have always been favored as apéritifs and the sweet ones as dessert wines. The word Sherry came into English from the name Jerez (HEReth), but throughout the Spanish speaking world Sherry is still known as vino de Jerez.

So what’s so special about Sherry?

The identity of Sherry is tightly controlled by a regulatory council. To earn the Denomination of Origin “Jerez-Xeres-Sherry,” the grapes must be Palomino, or less commonly Pedro Ximenez or Muscat, and they must be grown within the triangle formed by the towns of Jerez de la Frontera, Sanlucar de Barrameda, and El Puerto de Santa Maria.

The regulatory council most zealously excludes the American state of California. This small region has a unique micro-climate influenced by the Atlantic Ocean, the Guadalquivir and Guadalete rivers, and the moist, warm winds from nearby North Africa. Probably the most influential factor in developing the character of the grapes is the area’s chalky, almost white albariza soil, which has an unusual capacity for absorbing and retaining air and water.

Of course, many great wines come from exceptional micro-climates and soils. But what sets Sherries apart from all others is the unique process by which they are blended and aged.

After the grapes are pressed, the “must,” as the pressings are called, is put into huge stainless-steel tanks to ferment for forty to fifty days at a controlled temperature, achieving an alcohol content of 112 to 13 percent. The young wine then goes into 130-gallon American white oak casks (butts), where the aging begins.

Then comes decision time, when each wine is classified as being suited for transformation into either a dry Fino or a sweeter Oloroso, the two broad categories of Sherry. Finos include Manzanillas and Amontillados, while Olorosos include Cortados and various blends of the very sweet Pedro Ximénez grape. Wines destined to be Finos are fortified (strengthened with added alcohol) to 15 percent alcohol, Olorosos to about 17 percent.

The reason for the difference is that the f lor (literally, flower), a layer of local, naturally occurring yeasts that forms on the surface, cannot survive at an alcohol concentration higher than 15 percent, and all Finos must serve out their aging time under a layer of flor to develop their characteristic lightness and flavor. Olorosos are aged without a layer of flor, allowing air to oxidize them to a darker color, fuller body, and stronger nose. (Oloroso means fragrant.) Amontillados begin their aging under flor and finish after aflor-killing fortification to 17 percent alcohol.

During the aging, an intricate blending process unique to Sherries is carried out. Called soleras y criaderas, it consists of running the wine through a stack of butts containing wines of increasing ages. From the oldest, called the solera, one-third of the wine is drawn off for bottling.

Criadera comes from the Spanish word for nursery; the criaderas are the upper butts in which the younger wines are nurtured. Solera refers to the stone floor, where the bottom layer of butts holds the mature wine ready for bottling.