In late August 1999, the New York City Department of Health discovered an unusual outbreak of encephalitis (inflammation of the brain) concentrated among a group of elderly people living not far from La Guardia Airport in the northern part of Queens, one of New York City’s five boroughs.

The Department of Health, in cooperation with the Centers for Disease Control, began an epidemiological investigation, and within a week the CDC confirmed that the cause of the illness was an arbovirus, a disease caused by a virus carried by arthropods, a phylum that includes ticks and lice, among other invertebrates.

West Nile virus, previously a disease confined to the Middle East, quickly became the most talked-about disease in New York. By October 19, 1999, 31 cases of West Nile had been confirmed, and another 25 were probable. There had been no onset of disease after August 22. 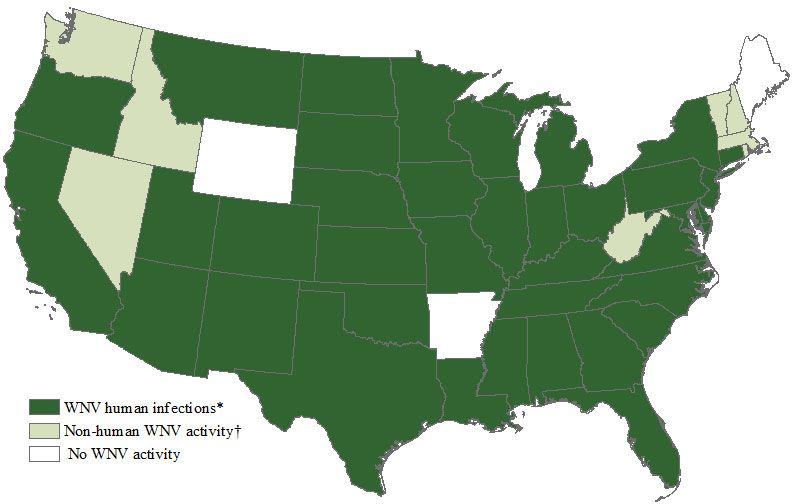 The virus is carried by mosquitoes and infects birds, mostly American crows, but also ring-billed gulls, black-crowned night herons, mallards, robins, red-tailed hawks, broad-winged hawks, and many others, 76 different species in all. Infected birds were found all over the New York City and in an area of New York State stretching from Saratoga County near Albany to Suffolk County at the tip of Long Island. Infected birds and/or mosquitoes were found in New Jersey and Connecticut as well.

West Nile virus, first isolated in Uganda in 1937, had never before appeared in the western hemisphere, although it is common in Africa, eastern Europe, western Asia, and the Middle East. How it got here is not known, although there are some theories. It may have been introduced by an infected human, by a human who arrived along with infected mosquitoes, or by a human or storm-transported bird. It has even been suggested that the introduction of the virus was the result of an intentional criminal or terrorist act.

The virus is a member of the flavivirus family, closely related to the species that cause Japanese encephalitis and St. Louis encephalitis. It is carried by several different species of mosquitoes that like to feed on birds. The virus lives in a mosquito for about 10 days and then migrates to the insect’s salivary glands, where it can be injected into an animal or human during the mosquito’s blood meal. The virus multiplies in the new host, causing illness. Humans and animals other than birds are incidental hosts, not essential to the life cycle of the virus.

Most people who get West Nile virus don’t know it because they are either completely asymptomatic or have very mild fever or headaches before they quickly get better. A serological survey in Queens conducted by the CDC on a sample of 677 people found 19 with undiagnosed West Nile infection, in other words, an astonishing 2.6 percent of the sample was infected without symptoms.

This suggests that thousands of people in Queens who had never been sick had nevertheless been infected. The New York City Health Department estimates that only somewhere between 1 in 130 and 1 in 300 people who are infected show any symptoms. Some people get a rash; lymph glands can sometimes be swollen. When it gets serious, it can cause permanent neurological damage and be fatal, but less than 1 percent of those affected develop severe neurological disease. The worst form of encephalitis that the disease can cause leads to severe headache, high fever, stiff neck, muscle weakness, confusion, coma, and death. The elderly are overwhelmingly at highest risk. Among the group who develop severe neurological symptoms, death rates range from 3 percent to 15 percent.

In the summer of 2000, the number of birds and other animals with the disease grew substantially, with cases reported not only in birds, but also in chipmunks, squirrels, raccoons, bats, horses, rabbits, and other mammals. Twelve different species of mosquito were found infected with it.

Moreover, the geographical distribution had widened to include cases detected either in humans, animals, or both in almost every county in New York, New Jersey, and Connecticut. Massachusetts, Rhode Island, New Hampshire, and Maryland also reported cases. Yet the number of human victims, for reasons that are poorly understood, decreased. Preventive spraying for mosquitoes certainly helped, but it is probably not the total explanation.

In any case, final figures for 2000 issued in the spring of 2001 showed that only 18 people had confirmed cases of West Nile virus during the summer of 2000 (with a single death, that of an 82year-old man), as opposed to the final figures for July to September 1999, when there were 62 cases and 7 deaths. On September 10, 2001, the New York City Health Department reported that three people had been infected during the 2001 season up to that time, and that 121 birds and 115 mosquito pools had tested positive for West Nile.

In the meantime, the CDC reported that by July 2001 the geographic spread of the infection in animals had increased substantially up and down the East Coast, along the migrating paths of infected birds. By the middle of October 2001, more than 4,500 crows and other birds had been found infected, 125 other animals, mostly horses, had tested positive, and the virus had been found in nearly 700 mosquito pools. With all of that, though, there were only 31 human cases reported to the CDC.

When the final figures for 2001 were compiled, West Nile had appeared in various animals or mosquito pools in 359 counties of 27 states and the District of Columbia, a large increase from the 12 states that had reported the disease in 2000. The virus had also appeared in birds in southwestern Ontario. The total of human cases for the year was 66, with the dates of onset ranging from July 13 to December 7. Mosquitoes of the genus Culex are apparently the most common vectors of the illness in the United States.

The neurological symptoms of West Nile are almost impossible to distinguish clinically from those of other viral diseases such as herpes simplex or varicella, so a blood test is the only way to arrive at a certain diagnosis. But this doesn’t mean that everyone who gets a mosquito bite should have his blood tested for West Nile virus.

The tests (you need more than one to confirm the diagnosis) are expensive, laboratory capacity to do them is limited, and if there are no symptoms, they are unnecessary. Even people with very mild symptoms don’t need to be tested, they’ll get better by themselves.

Another reason for limiting testing is that there isn’t any vaccine or other medicine that works against West Nile virus, so the test results, although they may be important in epidemiological research, don’t really matter to the individual, no matter what the test says, there’s no treatment other than supportive care to provide symptomatic relief.