Why did Paul Revere have to Borrow a Horse for his Famous Midnight Ride during the American Revolution?

There is no record of American silversmith and Patriot Paul Revere owning a horse during the American Revolution, although many argue he probably did. 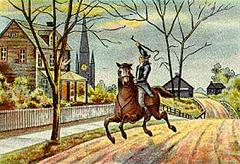 What did happen was this. He was rowed across the Charles River to Charleston, just north of Boston, to begin the ride, so naturally he had no horse with him. The horse he used for his ride was a loaner from Samuel Larkin, a staunch patriot sympathizer.

According to the Larkin family geneaology, published over 150 years after the fact in 1930, Brown Beauty was the horse Paul used.

Whether this version is accurate or not, we do know that the horse Revere rode was never returned to its rightful owner, it was captured by the British and used to replace a British sergeant’s tired horse.

Paul Revere was was celebrated after his death for his role as a messenger on horseback just before the battles of Lexington and Concord.

His famous “Midnight Ride” occurred on the night of April 18, 1775, when he and William Dawes were instructed by Dr. Joseph Warren to ride from Boston to Lexington to warn John Hancock and Samuel Adams of the movements of the British Army, which was about to move toward Lexington to arrest them both.

And it is here we conclude Historical Horses.