Why Do Light Bulbs Usually Blow When First Switched On and What Causes a Light Bulb Filament To Burn Out?

When a light bulb is switched on, its delicate filament is hit with a triple whammy.

The resistance of the metal filament rises with its temperature. 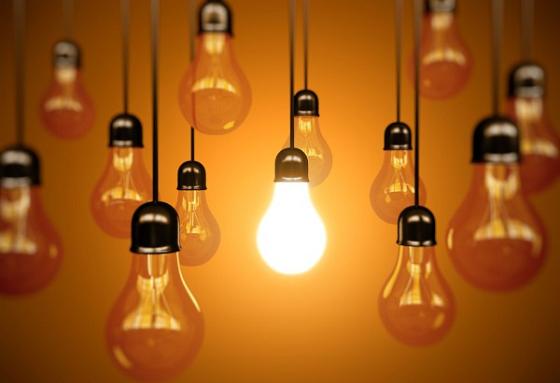 When it is switched on, its resistance is less than a tenth of its usual working level so an initial current more than 10 times the rated value surges into the filament, heating it very rapidly and creating thermal stress.

If any part of that filament is slightly thinner than the rest, this area will heat up more quickly. Its resistance per millimetre will be higher than that of the rest of the filament, so more heat will be generated along this stretch than in the adjacent parts of the filament, amplifying the thermal stress.

In addition to all this, the filament is wound into a coil which also acts as an electromagnet. Because of this magnetism, each turn of the coil deflects its neighbouring turns so that the initial surge of current jolts the thin and delicate filament, creating mechanical stress.

So it is no wonder the poor thing goes splat when you throw the light switch.

The more electric current that passes through the tungsten-type metal filament of a conventional light bulb, the more the metal heats up.

When the bulb is first switched on, its filament goes very quickly from room temperature to white hot.

This rapid heating exposes the filament to maximum physical and thermal stress. When the current is switched off, the filament is surrounded by the warm structure of the bulb, so it changes temperature more slowly than when it is switched on.

The filament therefore has a much greater chance of blowing when switched on than when it is operating or when it is cooling after being switched off.

Light filaments blow when switched on because that is when the highest current and highest temperatures occur. If you measure the resistance of a light bulb when cold you will find it to be far less than the rated resistance.

In a 100-watt bulb I have just measured, the cold resistance was only 6 ohms, while the hot resistance is about 1.40 ohms.

Thus current flow and heat generated are far higher at switch-on than after the filament has heated up to its rated temperature. This is especially true at places where the filament has thinned due to age and evaporation of the metal. The large initial current heats those parts of the filament far above the standard operating temperature, which melts them.

A bulb filament works harder at start-up, and heats the thinner sections to far higher temperatures than during normal operation.

An incandescent lamp produces light by heating a tungsten wire filament to about 2500 °C. At high temperatures tungsten atoms evaporate from the surface of the wire, causing the blackening sometimes seen on the inside of the lamp’s glass envelope. This evaporation also leads to the filament gradually getting thinner with use.

A filament-destroying hotspot can occur on a filament for two reasons.

Firstly, if some turns in the tungsten coil are slightly closer than average, the temperature of these compressed turns will be higher than normal because more of the radiation they emit is trapped. Secondly, some turns of the coil may be a little thinner than those on either side of them. These turns will have a higher resistance than normal.

Therefore the rate of heat production at hotspots will be higher than in adjacent sections, and the thinner section will also have a reduced surface area, which decreases the rate at which heat can be lost, again contributing to a higher than normal temperature.

Because the rate of evaporation increases exponentially with temperature increase, hotspots will thin faster than cooler sections. Furthermore, as the wire at the hotspot thins, its resistance increases, raising the temperature even more.

So the temperature will continue to rise and wire-thinning will take place at an accelerating rate.

The cold resistance of a filament is about a tenth of that at normal operating temperature. This means that when a lamp is switched on, the initial current is very high compared with the normal running current. If the diameter of the wire at a hotspot has become sufficiently small, the large spike of current at switch-on may melt the wire.

As a small gap forms between the broken ends of the filament, an electrical discharge may cause a spark or arc to form across the gap.

This arc may spread to the leads supplying current to the filament. If this happens, the low-resistance arc allows a large surge of current to flow through the lamp, which may in turn cause a fuse to blow or a current-breaker to trip.

The arc may be seen as a flash of light within the lamp.