Why Does a Bottle of Champagne Foam Up All Over the Place When You Open It?

The bottle had undoubtedly been treated roughly some time earlier, without having been given enough time to recover. It must rest quietly on ice or in the refrigerator for at least an hour before being gently removed and opened.

In contemporary American society, Champagne is not meant to be drunk anyway. It is meant to be sprayed at Super Bowl winners in locker rooms.

The proper technique for these ebullient shenanigans, which I record here purely for its scientific and educational value (DO NOT TRY THIS AT HOME!), is first to pour out a little of the liquid to get more shaking space, then place a thumb over the bottle’s opening, shake the bottle vigorously, and quickly slide the thumb slightly backward, not sideways!, in order to aim a concentrated stream of frothing liquid precisely in the forward direction. 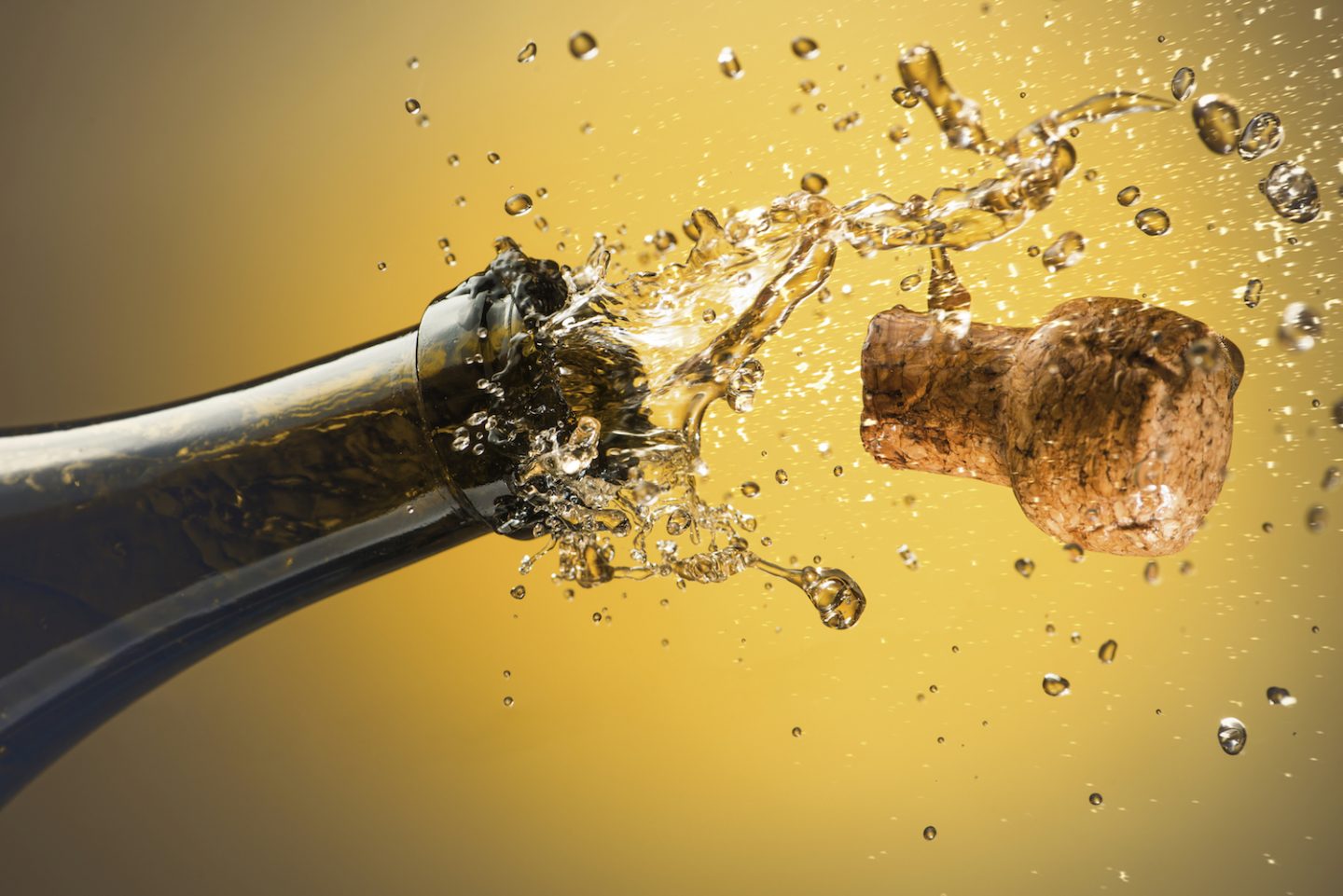 The scientific and educational point I want to make is this: The reason the liquid squirts out is not, repeat, not, because of any increased gas pressure within the bottle. You could fool any number of chemists and physicists on this point, but it’s true.

The gas pressure does go up temporarily inside a shaken, sealed bottle, but that’s not what propels the liquid, because as soon as you pop the bottle open or slide back your thumb the pressure drops down to that of the air in the room. And anyway, how could gas pressure in the space above a liquid shoot the liquid out of the bottle? The powder charge in a bullet has to be behind the slug, doesn’t it?

Then why does the liquid shoot out with so much force when you release it immediately after shaking? The answer lies in the extremely rapid release of carbon dioxide gas from the liquid; that’s what provides the shower power. It’s like an air gun that gets its power from the sudden release of trapped air. There is something about shaking the bottle that makes the gas want to escape almost instantly from the liquid. And in the mad rush to escape it carries a lot of liquid along with it.

Carbon dioxide dissolves very easily in water, but once it’s there it is extremely reluctant to leave. For example, you can leave an open bottle of soda, beer, or Champagne on the table for several hours before it will go totally flat. One reason for this is that gas bubbles can’t just form spontaneously.

The gas molecules need something to grab onto, some kind of an attractive gathering place where they can congregate in one spot until there are enough to form a bubble. The gathering spots, called nucleation sites, might be microscopic specks of dust in the liquid or tiny imperfections in the container’s wall. If there are very few such nucleation sites available, the gas won’t form bubbles and will stay dissolved in the liquid. Beverage bottlers use highly filtered water for that reason.

But if many nucleation sites happen to be available, gas molecules will quickly gather around them and form baby bubbles. As more and more gas molecules gather, the bubbles grow, eventually becoming big enough to rise through the liquid and escape at the surface.

Shaking the bottle puts millions of tiny bubbles into the liquid from the gas space, the “head space”, above the liquid. These baby bubbles are extremely effective, ready-made nucleation sites upon which zillions of other gas molecules can quickly gather to form bigger and bigger bubbles.

And the bigger the bubbles become, the more surface they offer for their fellow gas molecules to gather upon and the faster they grow. Thus, shaking the container immensely speeds up the release of gas, which occurs with such explosive force that a lot of liquid is swept along with it. Result: a very effective weapon for drench warfare.

Fluid fusillades aside, there are a couple of peacetime implications of these principles.

First, you don’t have to be afraid that jostling or shaking an unopened bottle or can of carbonated beverage will make it explode. Shaking it will indeed sweep out some gas from the liquid into the head space, but there just isn’t enough head space in the bottle to hold much pressure.

Besides, not long after a can or bottle has been shaken, all the baby-bubble nucleation sites will have risen back into the head space, where they can no longer do their dirty deed of, if you’ll pardon the expression, releasing gas. Just don’t open a container right after it has been shaken, while the nucleation bubbles are still distributed throughout the liquid. Let it rest first, to return to what chemists call “a state of equilibrium.”

The trick with Champagne and other sparkling beverages is to let them rest quietly for a couple of hours before opening them. What is so effective about fizzical combat is that you release the bottles’ contents immediately after shaking, while the bubbles are still down inside the liquid making their bubble trouble. But remember: Even though the Champagne is well rested, the Geneva Convention strictly forbids aiming a Champagne cork at anyone, civilian or combatant; it can do serious damage.

One last point: Because heat expels some of the gas from the liquid into the head space, a warm beverage will spritz more upon opening than a cold one will. That’s the other trick with Champagne; it must be cold.

In fact, heat can cause so much gas pressure in the head space of a beverage container that an occasional can or bottle has burst in the trunk of a car parked in the hot sun.