Who invented Champagne and How do they get the cork into a bottle of Champagne?

Two secrets apply when putting cork into a bottle of champagne: first, the cork was soaked and thereby softened before being driven into the bottle, and second, the cork was originally a bit slimmer than the one you see fly across the room on a festive occasion, it has expanded over time because of the pressure of carbon dioxide within the bottle.

True champagne is a sparkling wine from the Champagne region of France. In contrast to still wines, which are fermented once, champagne is fermented twice, once in a cask or tank, a second time right in the bottle. Fermentation occurs when yeasts act upon sugar in the wine, converting it to alcohol and carbon dioxide.

One of the first to make a study of this double fermentation was a monk by the name of Dom Pierre Perignon, who became cellar master of the abbey of Hautvillers in 1670. He toyed with the sugar content of the wine and so began to learn how to control the bubbliness of the stuff. He also garnered wines from different fields and blended them in order to produce the same taste year after year, a practice continued to this day. 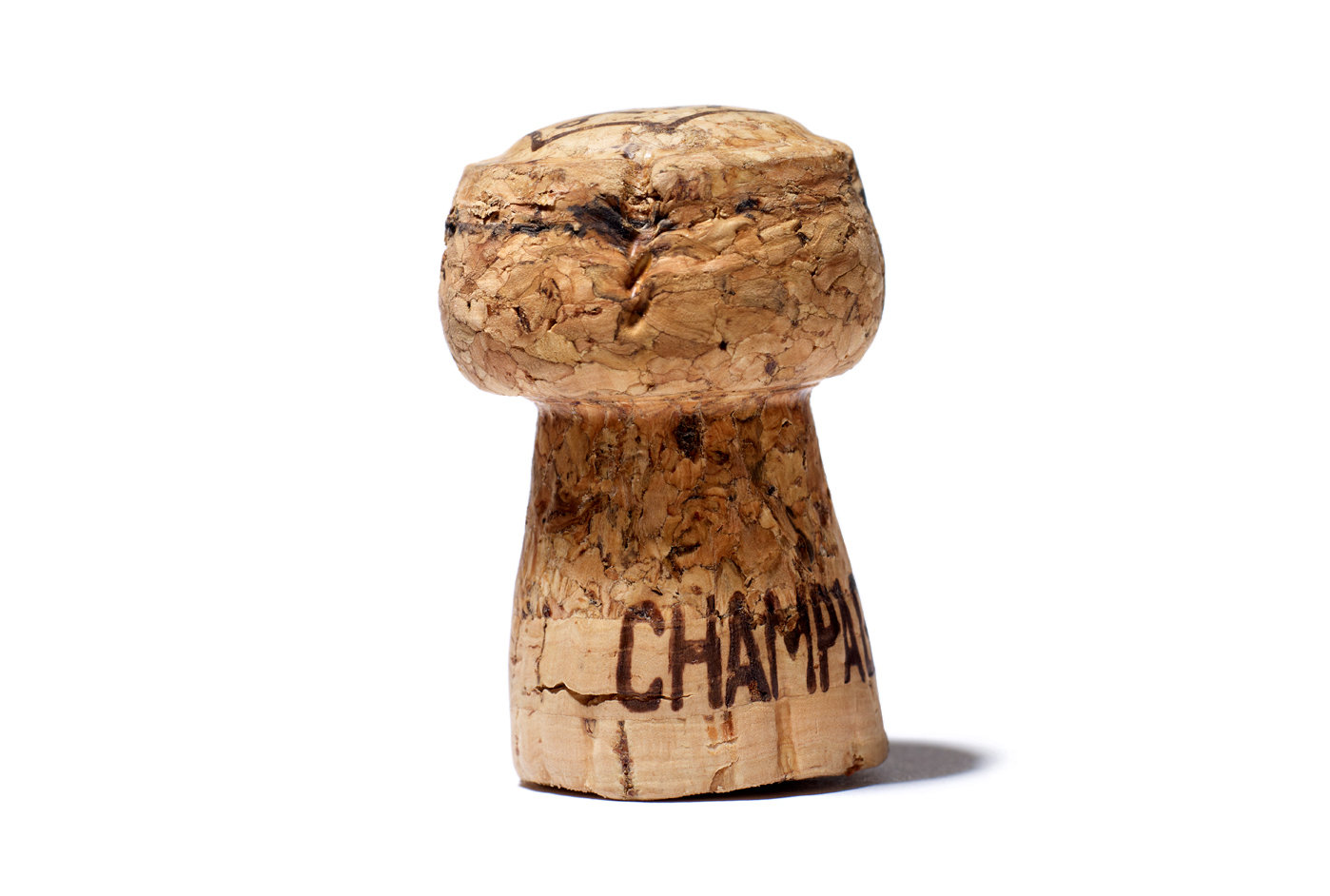 While at Hautvillers Dom Pierre encountered some Spanish pilgrims whose gourds were sealed with cork. Until that time he had been stopping his bottles with wooden plugs wrapped in oiled hemp. He quickly saw the advantages of the more elastic substance, which expanded in the bottle, sealed it better, and reduced leakage and explosions.

Cork trees grow in the Iberian peninsula, southern France and southern Italy, Corsica, Sardinia, and North Africa. The best corks, those suitable for capping a fine champagne, come from Spain and Portugal, from cork trees at least fifty years old.

After a lengthy process of drying, boiling, and cutting, the corks are milled with emery to produce a smooth finish and sometimes treated with paraffin to help them slide more easily into the bottle. Champagne corks are forty-seven millimeters long and thirty to forty-eight millimeters in diameter, substantially larger than corks for still wines.

The substance is ideal for its purpose, being durable and impervious to liquid. And when it is cut, some of the cells that are divided develop the characteristic of adhering well to a slippery surface.

After a bottle of champagne has fermented the second time and been left to ripen in a cool cellar for a number of years, it is skillfully turned each day and eventually left standing on its head. Any sediment in the wine falls down to the cork. Then the bottle is ready for degorgement, in which a highly trained worker pries off the first cork, allowing sediment and as little wine as possible to fly out of the bottle.

Today the neck of the bottle is often frozen first to facilitate the procedure and reduce waste. When the bottle is opened, a frozen lump of sediment and a little wine is shot out by the buildup of pressure within. More wine is then added to replace what was lost, usually along with a liqueur of aged champagne and sugar.

At last the bottle is ready for the final cork. Corking machines have clamps that compress the cork, making it smaller than the neck of the bottle, and a vertical piston that drives the cork into place.

It will expand in the bottle where pressure is five to six times that of the outside atmosphere. Finally, other machines add metal caps secured with twisted wire.