Why does every Cake-Mix have Different Bake Times and Temperatures?

And that’s not even considering the plight of those unfortunates who live at high altitudes, who are exhorted to modify almost everything from the time and temperature to the amounts of flour and water.

The necessity of changing the time and temperature for various pan shapes and sizes is easy to explain. It’s a matter of surface -to volume ratio. That is, if the same volume of batter is spread out into a wide pan, exposing a large surface area to the oven’s heat (a large ratio of surface to volume), such as in a sheet cake, it will cook faster than if it were poured into a bundt pan, which exposes relatively little surface area to the hot air. 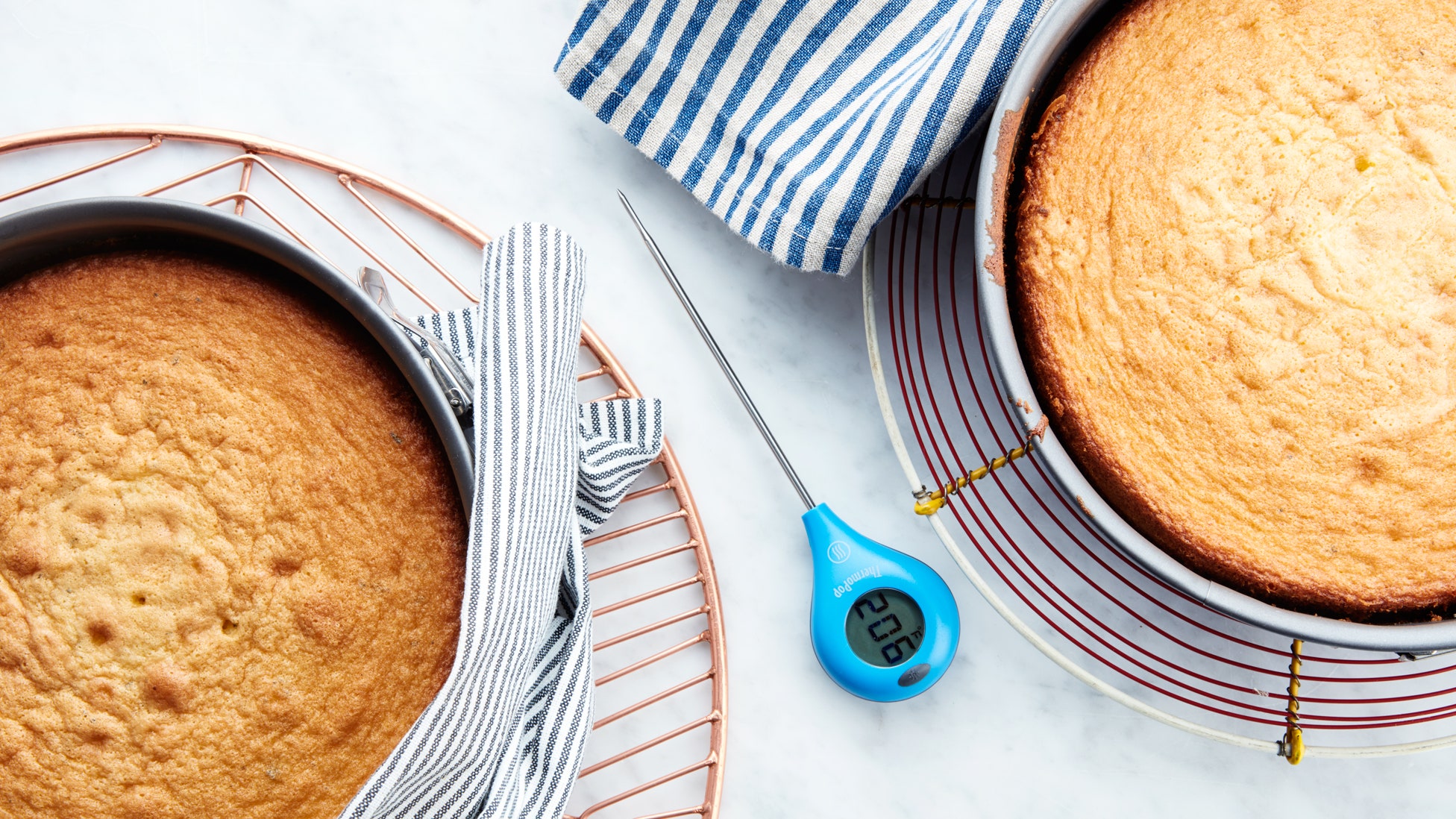 Then there’s the question of what the pan is made of. In my supermarket survey I found that for standard, shiny aluminum pans, almost all the mixes specify a preheated oven temperature of 350°F (177 °C). For dark-colored pans, many of the boxes specify a lower temperature of 325°F (163°C). Several boxes specify 35°F for glass baking pans, but several also say 325°F for glass or metal pans, without mentioning dark-colored pans at all. And one devil-may-care box, bless its heart, says “350°F (any type pan).”

I am now going to violate the most fundamental principle of expository writing, if not of teaching, by admitting at the start that none of the recommendations matter in the end, and then asking you to bear with me while I explain the scientific reasons behind the recommendations.

• The color of the pall: A relatively shiny aluminum or stainless-steel cake pan obviously reflects visible light more than a dark-colored anodized one or a non-stick coated one. Because all the light falling on an object must be either reflected or absorbed, that means that the dark surface is absorbing more light than the shiny one is. That extra absorbed light energy makes the dark-colored pan slightly warmer than the shiny one, even in a same temperature oven. (To manage our body heat, we wear lighter-colored clothes in the summer and darker ones in the winter.)

But what light is there inside a dark oven, you ask? Infrared radiation, which many people refer to as infrared “light” even though it’s invisible to the human eye. A dark surface absorbs more of this radiation than a light-colored or shiny surface does. That’s particularly important because when an object absorbs infrared radiation it becomes warmer, significantly warmer than if it had absorbed visible light. Thus, a cake should cook faster in a dark pan than in a light one, and we are often advised to lower the oven temperature to compensate.

• The material of which the pan is made: A thin metal cake pan of any color conducts the oven’s heat efficiently into the batter. But compared with metal. a glass pan is a very poor conductor of heat and is quite sluggish at transmitting its oven-given heat into its contents. Using a glass pan and given the choice of fast baking at a high temperature or slower baking at a lower temperature, we would choose the latter, because the oven’s heat needs a longer time to penetrate through the glass to the batter. It’s not a big effect, so a relatively small decrease in oven temperature or a small increase in baking time (which some cake-mix instructions specify) suffices.

And now, as promised, I repeat that none of this really matters. Home ovens don’t work like the carefully calibrated equipment in the test kitchens of Betty Crocker or Duncan Hines. There, armies of lab-coated technicians painstakingly work out the best possible conditions for baking their mixes to ensure that the home cook garners accolades from his or her family and runs back to the store to purchase more. But in real life, home ovens may vary from their set temperatures by plus or minus 25°F  (14°C ) or even more, and the issue of 350 versus 35 degrees is in most cases moot.

So use whatever kind of pan you have, and by all means, turn your oven dial to the recommended number. But don’t bet your cookies on it. After all the directives about pan material, oven temperature, and baking time, every cake-mix box that I’ve seen winds up admitting that the cake is done when, and only when, it looks done and a toothpick inserted into it comes out clean.

And that’s the truth.