Why Does My Turkey Gravy Turn Out To Be Either Lumpy Or Greasy?

It doesn’t have to be either lumpy or greasy. We all know people who can make it both lumpy and greasy at the same time, don’t we?

Lumps and grease arise from the same basic phenomenon: Oil and water won’t mix. In your gravy, you want some of each, but you have to trick them into blending.

First, let’s get some terminology straight. Oil, fat, and grease are the same stuff. It’s called a fat when it’s solid and an oil when it’s liquid. Any solid fat can be melted to a liquid, and any liquid oil can be solidified by cooling. 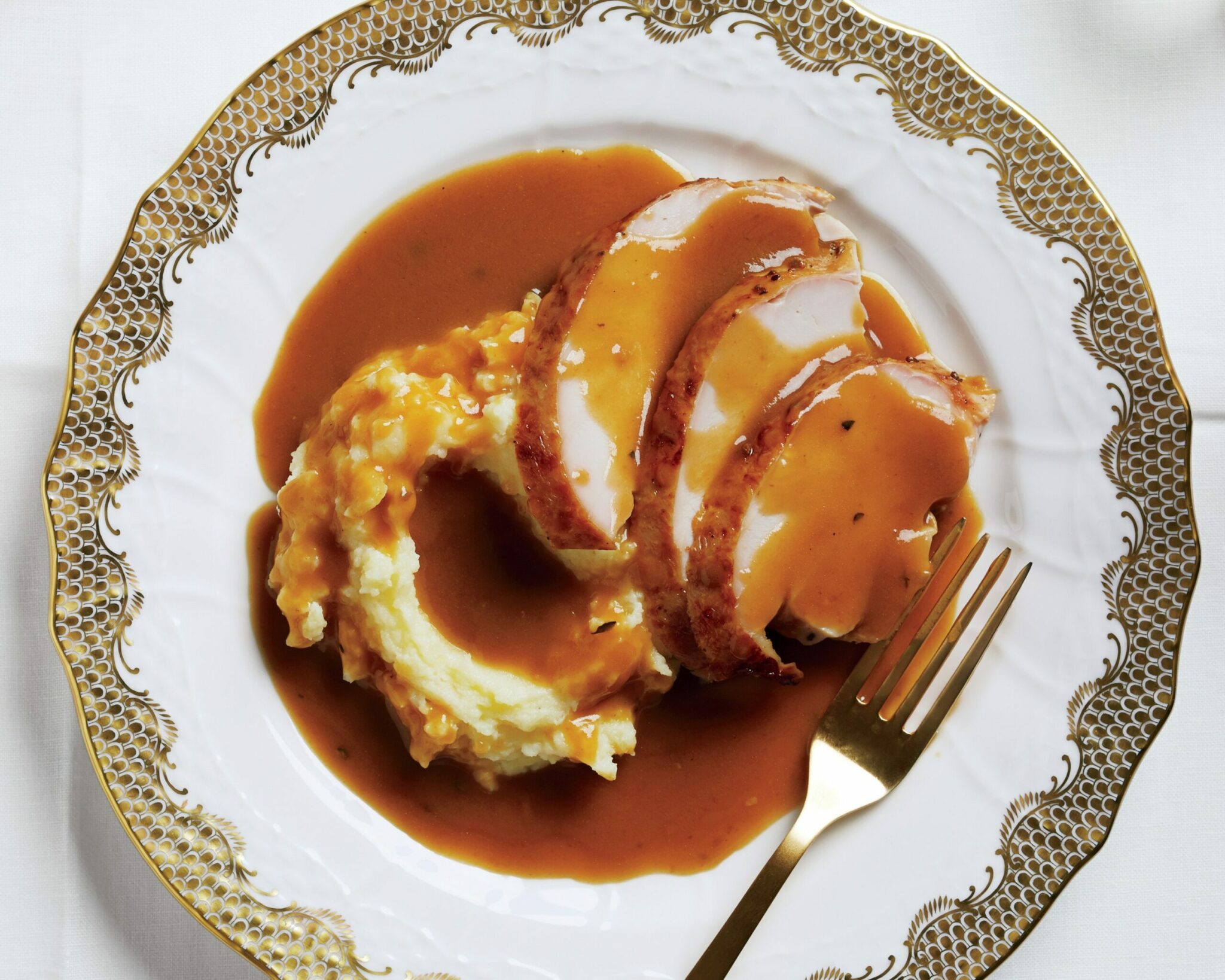 In their natural forms, solid fats are generally found in animals and liquid oils are found in the seeds of plants. But food professionals call them all fats anyway, because they play the same role in nutrition.

Grease is an intermediate consistency between solid fat and liquid oil. The word has an unsavory connotation (a crummy restaurant is called a greasy spoon), and it is never heard at the dinner table except in the most dire of circumstances. In what follows, I’ll use the words fat, oil, and grease as necessary to get my point across. Or frankly, I’ll use whichever one I feel like using.

A bit more about nomenclature: Originally, gravy meant the juice that drips from meat while it is cooking. When a roast is served with that relatively unmodified liquid, it is said to be served au jus (o-ZHOO), which is French for “with juice.” (Menus that say “with au jus” were written by bilingual stutterers.) Unfortunately, most restaurant jus is just a powdered commercial “base” made of salt, flavorings, and caramel coloring, dissolved in hot water.

When you add other ingredients to the pan drippings and cook them together, you’re making gravy. And what, then, is a sauce? It’s made in a separate pan, usually by incorporating some of the same drippings, but augmented by any number of seasonings, flavorings and other ingredients.

Let’s talk about the most common kind of gravy: pan gravy made from the drippings of roast meat or fowl.

No one likes watery gravy, so a thickening agent must be used. That’s where flour comes in. Flour contains both starch and protein. Thickening a sauce with cornstarch or arrowroot, which are non-protein-containing starches, is a totally different ball game, so don’t try to substitute them for flour in what follows.

When your turkey is done, remove it from the roaster and examine the godawful-looking mess in the pan. You’ll notice that there are two kinds of liquids: an oil-based liquid consisting of melted turkey fat and a water-based liquid, which is the juices from the meat and vegetables plus any broth or water that you may have added.

The trick is to incorporate both of these incompatible liquids into your gravy, because each contains a unique set of flavors. That is, certain flavors are fat-soluble and others are water-soluble. Your goal is to get the fat-based flavors and the water-based flavors to mix into a smooth, homogeneous sauce.

It’s all in how you handle the flour, because flour is not only a thickening agent; it also does the job of blending the oil and water together.

Flour is a very fine powder containing certain proteins (glutenin and gliadin) that combine form a sticky substance, gluten, when they absorb water. Now if you were just to dump some flour into the roasting pan and stir, the proteins and the water would get together and form a sticky glop.

And since the glop is water-based, the oil wouldn’t be able to penetrate it. You’d wind up with lumps of glop wallowing in a pool of grease. This may be standard fare in some households, but most experts agree that gravy should not be the chewiest part of a Thanksgiving dinner.

What should you do instead? It’s as simple as one-two-three (plus two):

Here’s how it works.

By mixing the flour with fat first, you ensure that each microscopic grain of flour becomes coated with oil, so that the watery juices can’t get through to gum up the flour’s protein.

Then, when you stir the juices into the roux, the flour grains become widely dispersed, taking their coatings of fat along with them. And that’s exactly what you want: fat and flour uniformly dispersed throughout the liquid to make a smooth, homogeneous mixture.

In short, you’ve persuaded the oil and water to fraternize by using the flour as a carrier of oil throughout the water. Then, when you simmer the sauce to let the flour do its thickening job, it does it uniformly throughout. No thick spots or thin spots. No lumps.

If you make your roux with too much fat, though, it won’t all be picked up by the flour, and the excess fat will just hang around in greasy little pools, ruining your reputation. On the other hand, if you use too much flour, it won’t all be coated by the available fat, and the extra flour will turn into lumpy library paste as soon as you add the watery liquid. So it’s essential to keep the amounts of flour and fat just about equal.

How much flour, fat, and watery liquid? To one part flour and one part fat, use eight or more parts of liquid juices and/or stock, depending on how thin you like it. Your gravy will be legendary.

Are you concerned about cleaning your chickens and other poultry before cooking them? Do you have trouble getting all the gutsy gook out of the cavity?

I use a hair brush with stiff plastic bristles for my “gut brush.” Rotating it inside the cavity gets all the fragments of liver, lung, and god-knows-what out from between the ribs.

I then rinse the brush under hot water and put it in the dishwasher.