Why does Onion Soup Taste Different from Fried Onions?

French onion soup tastes nothing like raw or fried onions. It’s all in the different chemical reactions that take place at room temperature, at the wet temperature of boiling water, and at the high and dry temperature of frying.

Raw garlic and onions have little or no aroma until cutting or chewing breaks open their cells. An enzyme and another preexisting chemical (a precursor) that had until then been isolated from each other can now meet and react chemically to produce the odorous and sharply flavored compounds we know too well.

But in hot water these seven-syllable chemicals (alkylthiosulfonates) change into other polysyllabic compounds: propyl and propenyl diand trisulfides and thiophenes. These are among the compounds that give flavor to our garlic and onion soups. 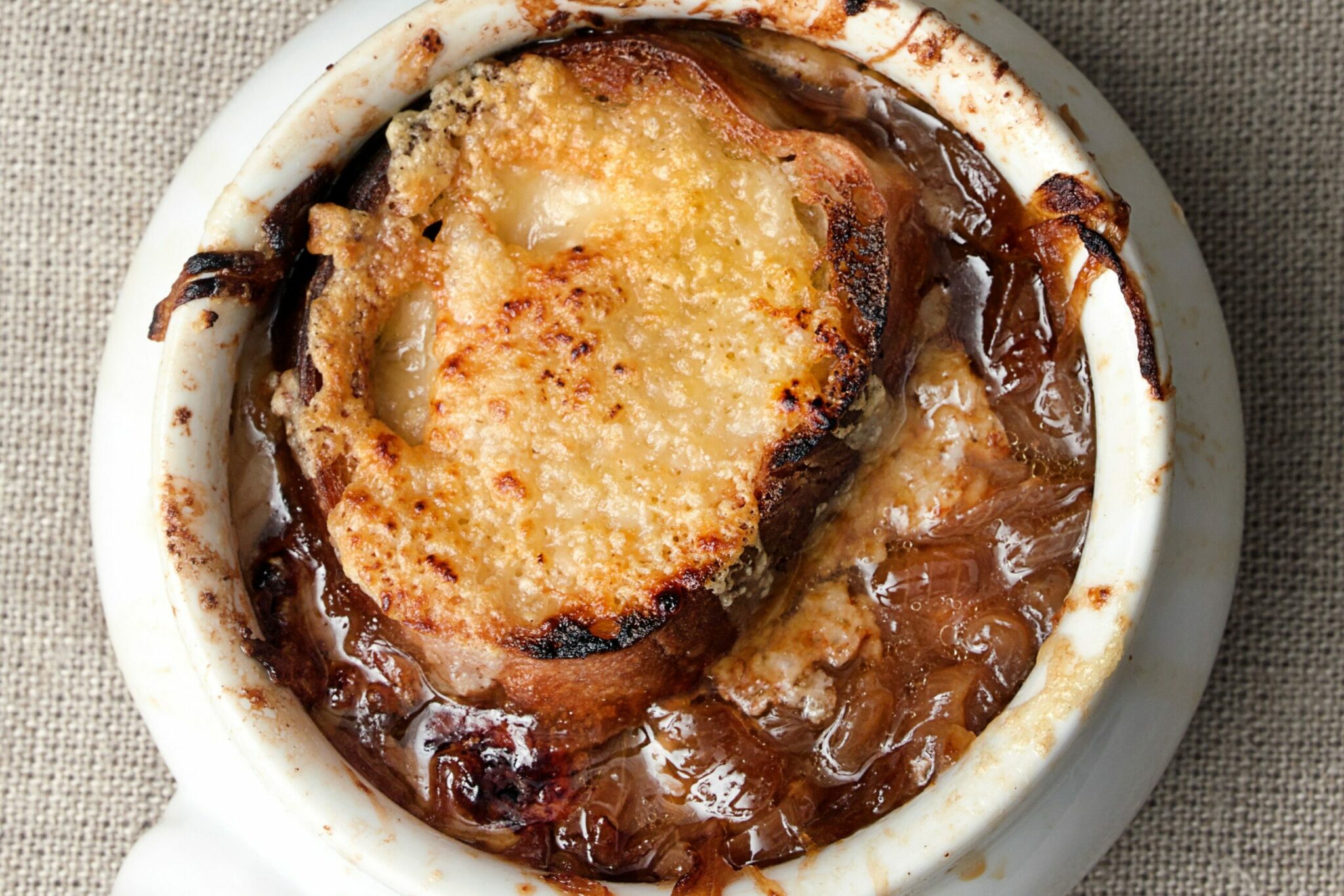 And frying? Don’t ask. Dozens of other chemicals are produced at the high temperatures involved, notably the many aromatic, flavorful, and bitter compounds created by the Maillard browning reactions.

Let’s look at what happens to onions as we subject them to more and more aggressive cooking techniques. Garlic behaves in very much the same way.

Dried, raw onions are made up of about 37 percent sugars and 8 percent proteins, so they brown predominantly by the Maillard, or sugar, amino acid, reactions. Yet virtually every chef refers to the browning of onions in a skillet as “caramelizing” them. Perhaps a reason for that can be found by examining the three different stages in the cooking of this uniquely flavored vegetable: sweating, goldenizing (I’ll explain), and frying.

• Sweating: We sweat raw onions by placing them diced or sliced in a sauté pan with a little bit of butter or oil, covering the pan with a circle of parchment or waxed paper (or a cover), and cooking them slowly over very low heat. The heat vaporizes some of the water inside the onion’s cells (onions are 89 percent water). The vapor pressure bursts them and releases their juices, in which the onions then simmer and steam. They turn soft and translucent (another consequence of the broken-down cell structure), but we stop cooking them before any browning takes place. The initial pungent flavor compounds will have been converted to the softer-flavored compounds we associate with onion soup.

• Goldenizing: If instead we cook the onions uncovered, the released cell juices will quickly boil off and the temperature will rise from around 212°F (100°C) to perhaps 300°F (149 °C), where the Maillard browning reactions proceed rapidly. The fact that some of the Maillard products are sweet is perhaps one reason that cooks are enticed into using the sugar word caramelize for this process. What they really mean, however, is taking the onions only to a soft, golden tan, the color of caramel candies, but stopping short of actually browning them.

In hopes of banishing the use of the word caramelizing for the gentle sautéing of onions, I hereby offer to the world the word goldenizing. I realize that goldenize has only three syllables to caramelize’s four (and for heaven’s sake, people, it’s CAR-a-mel-ize, not CARM-el-ize), but what it may lack in grandeur it more than makes up for in accurate imagery.

• Frying: If we continue cooking beyond that stage. Monsieur Maillard really goes to town and we wind up with honest-to-goodness fried onions, with their intense “browned” flavors.

So goldenize your onions to a pleasing russet hue and a mild, sweet flavor. But you’re not caramelizing them unless you’re one of those people who add a little bit of sugar to hasten the production of color.

Note: I know full well that I am fighting a losing battle. No matter what this chemist guy says. chefs will continue to talk about “caramelized” onions, “caramelized” grilled meats, “caramelized”fond in the bottom of a sauté pan, and “caramelized” anything else that turns brown when cooked. But I tried, and that makes me feel better. The Great Chemist in the Sky will bless me for it.