Why does the Oxpecker Bird Ride on the Backs of Rhinos and Hippos and Are They Parasites?

The oxpeckers are two species of bird from the Buphagidae family which live in the savanna of Sub-Saharan Africa. 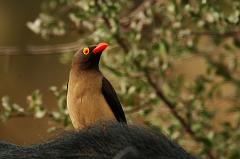 Their names come from their habit of perching on large mammals such as cattle or rhinoceroses, and eating ticks, botfly larvae, and other parasites.

The oxpeckers are related to mockingbirds and starlings, and possibly evolved from similar birds from Southeast Asia.

Oxpeckers were originally thought to be an example of symbiotic relationships in the animal kingdom, but recent evidence suggests that oxpeckers may be parasites instead.

They have been observed to open new wounds and pick existing ones in order to drink the blood of their hosts, and some oxpecker hosts do not seem to tolerate their presence.