Why Is Einstein’s Equation E = mc2 Important To Science?

Frankly, E = mc2 doesn’t mean a hell of a lot. But that’s not to say that it isn’t one of the most momentous realizations ever to dawn upon the human mind. Although it has to do with things that are happening right under our noses every day, they are much too small to notice except when brought to our attention by that bomb that you mention, which is assuredly one of the most effective attention-getting devices of all time.

This most famous of all equations was first put on paper by Albert Einstein in 1905 as one small part of his theories of relativity. Among many other things, Einstein discovered that there is an intimate relationship between mass and energy. Energy is the ability to make things happen, while mass is essentially the weight of a material object.

Intuitively, we would love to believe that energy is energy and objects are objects, period. But Einstein discovered that energy and mass are really two different but interchangeable aspects of the same universal stuffy which for want of a better term we may call mass-energy. Einstein’s astoundingly simple little equation is the formula for determining how much energy is equivalent to how much mass, and vice versa. 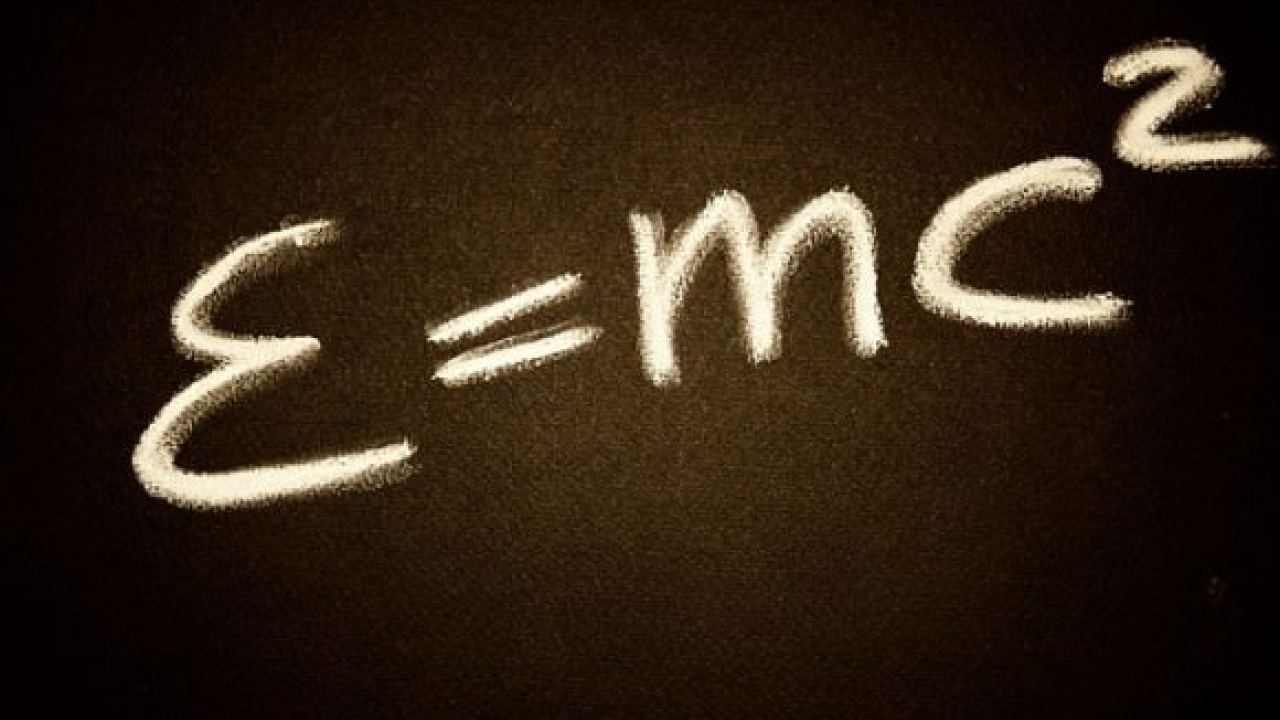 (For the mathematically unchallenged: If m stands for atl amount of mass and E stands for the equivalent amount energy, the equation says that you can determine that amount of energy simply by multiplying m by a number representee! as c2. The number c2 is incomprehensibly huge, it is square of the velocity of light, so you can get an enormous amount of energy from a minute amount of mass.)

The reason that Einstein’s equation isn’t very relevant in everyday life (with one major exception that we’ll mention) is that all of our common, daily energy-producing activities, such as metabolizing our food and burning coal and gasoline, are purely chemical processes, and in all chemical processes, the amounts of mass that the energy came from are utterly minuscule.

How minuscule? Well, even if we explode a pound of TNT, which you will agree is a chemical process that releases a pretty fair amount of energy, all of that energy comes from the conversion of only half a billionth of a gram (twenty trillionths of an ounce) of mass. If we could weigh the TNT before the explosion and then gather up all the smoke and gases after the explosion and weigh them, we would find that they weigh half a billionth of a gram less.

That is far, far beneath our notice. We can barely measure such a tiny difference in weight with the world’s most sensitive scales. So while Einstein’s equation applies without exception to all processes that involve energy, and don’t let anybody tell you it doesn’t, it is of no consequence whatsoever in our everyday lives.

That goes for all chemical processes. Nuclear processes, on the other hand, such as the nuclear fusion reactions that go on in the sun and the nuclear fission reaction that goes on in an atomic bomb, are quite another story. Because virtually all the mass in the world resides in the incredibly massive nuclei of atoms, much greater amounts of energy can be released, atom for atom, in a nuclear process than in a chemical process. Billions of times greater.

Chain reactions aren’t all bad. If we control the speed at which a nuclear fission chain reaction multiplies itself, we have a nuclear reactor. In a nuclear reactor, the energy is given off gradually enough to generate heat to boil water to make steam to drive turbines to drive generators to make electricity to light the lamp you may use to read this.

That’s what’s in it for us folks in the street.

Mass is converted into energy during ordinary chemical reactions.

Only well-schooled people will bite on this one; you might even hook a chemistry teacher. Chemists are so used to ignoring the tiny mass changes associated with chemical reactions that they believe there simply are no mass changes, and that’s what ends up being taught in the schools. Clinch your argument by reminding your adversary that Einstein never said, “E = mc2 except in chemistry class.”