Why is it Better to make Stock with Cold Water first?

Just see how flavorful a stock you’d get by soaking the ingredients for hours in cold water, without ever simmering them.

Or try making a cup of tea with cold water, in a respectable amount of time, that is.

On second thought, don’t. You’ve heard of “natural,” “environmentally friendly” sun tea? It’s made by placing tea bags in cold water in a glass jar and placing the jar in direct sunlight to brew for several hours. Well, warm water, up to 175°F (79°C), containing organic matter is a good breeding ground for bacteria. And of course, the “warm, gentle rays of the sun” add nothing to the brew except poetry. To be perfectly safe, always make your tea with water that’s hotter than 195°F (91°C). 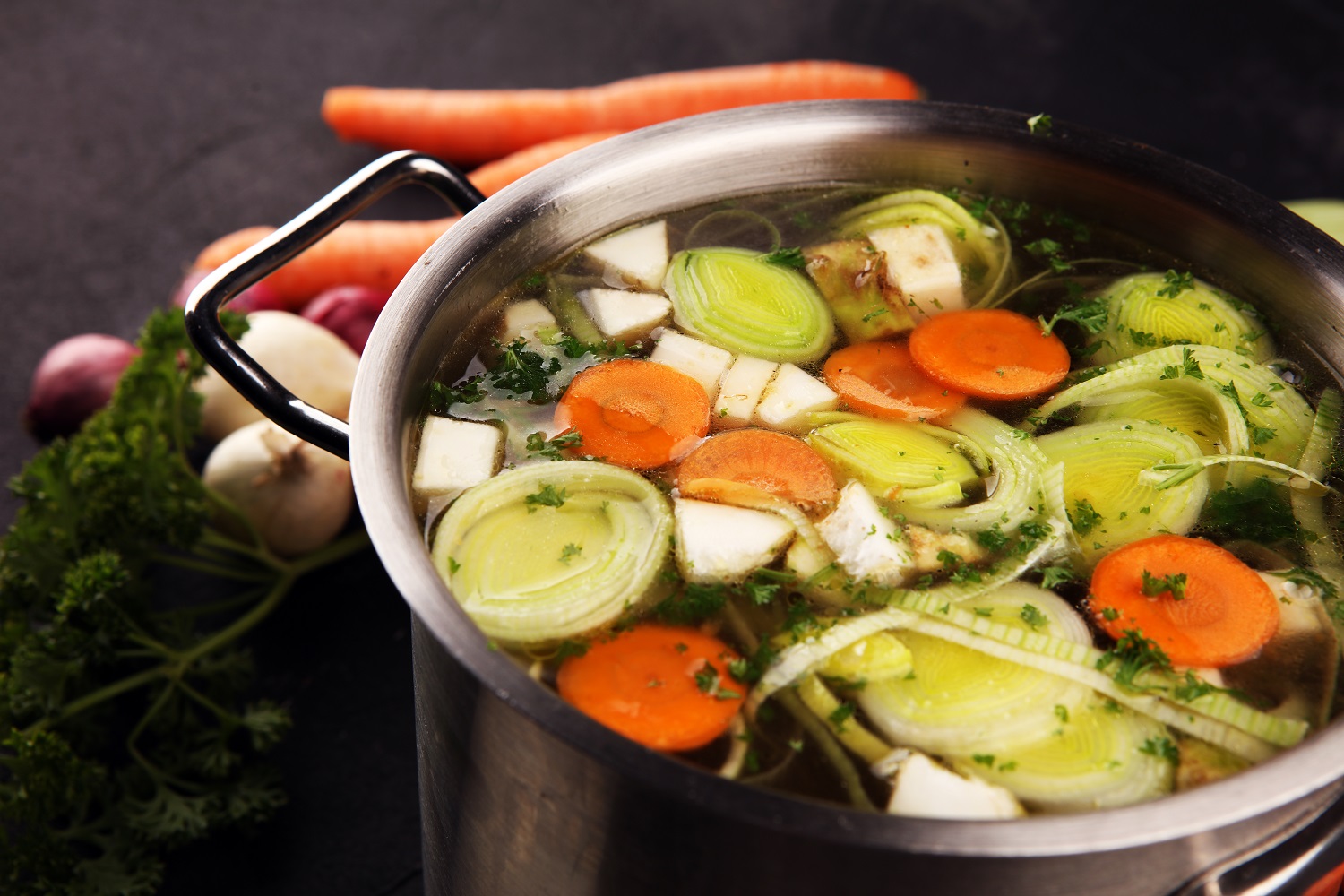 Cookbooks tell you how to make a stock, a concentrated water extraction of flavors from meat or fish bones and/or vegetables, but they rarely explain the reasons behind the steps. That’s understandable, because the purpose of a cookbook is to help you do the job right. But it’s easier to remember a procedure if it makes sense to you, rather than its being a mere series of “do this, don’t do that” instructions. If you understand the reasons behind the instructions, maybe next time you won’t need the cookbook and can venture forth on your own.

Stocks are known as either “brown” stocks, in which the bones and perhaps the vegetables have been browned by being roasted in the oven before being put into the pot, or “white” stocks, which aren’t really white, but merely not brown. Veal stocks are most often brown; chicken and vegetable stocks are usually white.

Dry-roasting the bones prior to simmering them adds a unique set of flavors to a stock because of the Maillard browning reactions: chemical reactions between the proteins and carbohydrates in the meaty and gristly hangers-on attached to the bones. Without Maillard browning, those flavors would be absent from the stock. The other, “wet” flavors would still get a chance to develop as the water heats up and simmers.

Let’s look at some of the reasons behind the customary instructions for making a stock.

Always start the bones and vegetables in cold water. The statement that starting with cold water “extracts the most flavor” is very misleading. It’s not that cold water extracts more flavor compounds than hot water does. It’s that if you were to start by plunging the bones and vegetables directly into hot water, some of the flavorful proteins would be made more difficult to extract during the later simmering stage. Thus, you would ultimately wind up with more flavor by not starting with hot water.

When subjected to heat, proteins become reconfigured (denatured). That is, their curly-shaped molecules first unfold and then re-bond into tighter, tangled structures. It’s more difficult for water to extract flavorful molecules out of these coagulated structures than out of the proteins in their original forms. So to extract the most flavor into the water, we don’t want the proteins to tighten up too soon.

If the bones and vegetables are started in cold water, the water-soluble proteins (some proteins are soluble in water; some aren’t) will have ample time to dissolve in the water before being made insoluble and inaccessible by the denaturation process. Also, during this low-temperature stage some undesirable water-soluble impurities, such as those in blood, will have time to dissolve in the water, where they will later coagulate as the water becomes hot. (You know that to remove blood stains from fabrics you soak them in cold water, because hot water would “set” the stain by coagulating the proteins.)

During gradual heating from a cold start, these undesirable proteins coagulate slowly throughout the body of the liquid forming relatively large particles of gunk. Meanwhile, some of the fat on the bones will have been melting and rising to the water’s surface. On its journey to the top, the oil will encounter the coagulated protein particles and coat them, acting as a sort of life vest to float them up to the surface as a greasy scum, which you can skim off.

On the other hand, in hot-from-the-start water, the impurity proteins would coagulate more rapidly, forming tinier particles of gunk that would neither settle out nor be captured by rising fat. They would stay suspended in the liquid, making it cloudy. (An exception to the cold-start procedure: Many chefs, for reasons of their own, prefer to add the vegetables only after the water is hot.)

• Add only enough cold water to cover the bones. Too much water would make a less flavorful stock; you want the extracted flavors to be well concentrated. Too little water, on the other hand, could leave some of the bones sticking out. Not only would their flavors be lost to the stock, water can extract flavors only from what is immersed in it, but the protruding bones could dry out, darken, and discolor the stock, a special concern if you’re making a white stock. To keep the water at the right level, you have to replace any water lost by evaporation as the stock simmers.

• Bring the water to a boil and then immediately turn down the heat to a simmer. Then simmer it; do not boil. Why simmer a stock instead of boiling it? The main reason is that the agitation of a full boil would break down those clusters of fat-coated, coagulated protein gunk into such tiny particles that they would evade your skimmer and once again you’d wind up with a cloudy stock.

Beef and veal stocks are simmered longest (6 to 8 hours) because their bones are relatively large and the flavor components are relatively inaccessible to the water. That’s why the bones should be cut up into 3 to 4-inch pieces. Chicken stocks, containing smaller bones, are generally simmered for 3 to 4 hours, while fish and vegetable stocks are simmered for only 30 to 45 minutes. The objective is to extract as many good flavors as possible and to convert as much of the connective tissue’s collagen into gelatin as you can, because gelatin gives the stock smoothness and body.

But certain flavor components begin to break down or become less desirable when a stock is cooked too long. (That’s especially true of fish stocks, whose muscle proteins are less stable than those in land animals.) Restaurant chefs may let their stocks simmer for as long as 6 to 8 hours and then reduce them even further after removing the solids. But for smaller home quantities, 3 or 4 hours should do the job. These times are the best compromise between extracting the most gelatin and retaining the best flavor. Simmering for less time than that will generally produce a stock that is thinner and not as flavorful.

• Skim the frothy scum off frequently. As we’ve seen, the scum consists largely of insoluble, congealed proteins. It won’t kill you, but it’s unappetizing. If left in the water during cooking, the proteins will tighten up even further into gunky gray specks, many of which will stick to the inside of the pot at the water line, forming a kind of (excuse the metaphor) bathtub ring.

Do your skimming with a fine mesh or net skimmer, not with a spoon of any kind. A slotted spoon lets the scum fall right through, and a solid-bowl spoon removes not only the scum but also the floating layer of flavorful fat, which you will deal with later. The mesh on a skimmer is just the right size to capture the scum alone.

After the prescribed cooking time, scoop out the bones and vegetables (now’s the time for your slotted spoon) and strain the remaining liquid through two or three layers of cheesecloth.

But, you ask, if you were eventually going to strain it, why all the fuss about preventing cloudiness? Because filtering through even several layers of cheesecloth doesn’t remove the very tiny suspended particles (colloids) that can make liquids cloudy.

• Cool the stock quickly. A stock is just as yummy to bacteria as it is to humans. That is, it’s a great culture medium. If allowed to cool slowly, it may spend too much time passing through the bacterial-growth-friendly temperature range of 40 to 140°F (4 to 60°C ).

Restaurants have deep sinks with overflow pipes, in which running cold water circulates around huge pots of hot stock. At home, you can put your pot in a sink filled with cold water up to the level of the stock inside (any higher than that and the pot will float); stir the stock periodically and change the water as it warms up.

•  Refrigerate the strained, cooled liquid and remove the solidified fat from its surface. That’s not only for the usual fat-phobic reasons, but because while solidifying, the fat will trap any of the oily flotsam that evaded your skimmer. (You’ll see it clinging to the bottom of the cake of fat.) But fat is flavorful, so don’t be ruthless. In the case of chicken stock, especially, you might want to allow some of the fat to remain.

Whatever you do, don’t put any pot of hot stuff directly into the refrigerator. A large pot of liquid contains a lot of calories of heat that will warm up everything in there, encouraging spoilage. Either cool the whole pot as described above, or divide the contents into several small containers, seal them, and let them cool individually before placing them in the fridge. They will cool much faster than if you try to cool a whole potful, because there is more surface area for the cool air to make contact with.

Now freeze your stock in convenient portions to be used for boosting the flavor of soups, sauces, and such thirsty dishes as risotto.