Have you ever noticed that the bottoms of ships or the supports of piers are often covered with white, shell-like substances with sharp edges? Perhaps you’ve even cut yourself on them while handling a rope or barrel that was in the water. 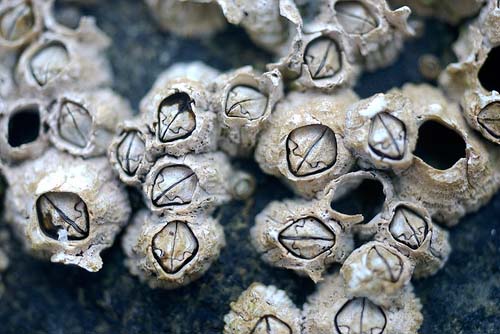 These white substances are produced by tiny sea creatures known as barnacles.

Barnacles are small shellfish that live in most sea water. When they’re hatched, they swim about, like other shellfish, but they soon attach themselves to rocks, pieces of wood, moored boats, or anything else in the water, and form colonies.

Once a barnacle attaches itself to something, it begins to grow a hard shell around its body. Only its tentacles stick out of the shell, and the barnacle uses these tentacles to catch the small sea creatures that form its diet.

When the barnacle dies, its shell remains. And since barnacles live in colonies, millions of them may attach themselves to the same object, eventually covering that object completely with their shells.

Barnacles on the bottom of ships slow down the vessels, so ships’ hulls have to be scraped every now and then. This job probably costs shippers hundreds of millions of dollars each year.